Exeter City striker Jayden Stockley thanked the club, manager and his girlfriend for the help he has had over the past week following the birth of his second baby daughter.

Jayden, whose daughter was born 10 days ago, netted the second goal away at Morecambe on Saturday to help the Grecians to a 2-0 win.

Asked if it had been difficult match following some sleepless nights in the build-up, Jayden said: “No, I don’t think my girlfriend would like me saying that.

“She has done the most of it. She has been fantastic and allowed me to get the sleep when I can. It has been a great few weeks. I have got two healthy baby girls and their mum’s doing brilliantly.

“It is just a great feeling to go out there and know everything is alright at home.

“I have got all the help I needed. The club have been fantastic. Matty has been so good with me, whether it is allowing me to have a day off here or there to sort things out. You are at are at a real family club and you don’t get that everywhere. It is nice, to just worry about the football and focusing on winning.”

Against Morecambe, City took the lead in the match when Lee Holmes showed a great bit of control and pace to get away from Jordan Cranston in the box before being tripped by the defender. However, it was not the last season’s top scorer Jayden who took the penalty, but the reliable Pierce Sweeney. He scored four penalties from four last season and calmly placed the ball above the dive Barry Roche.

“It was a brilliant penalty. I am annoyed I am not on them but I can’t say much because he keeps putting them away like that,” joked Jayden. “I would have easily got to 30 goals last season if it wasn’t for how good he was at penalties.

“To be fair though both he and Reubs (Reuben Reid) were brilliant last season at penalties and I am not going to say anything. I want him to keep putting them away because it helps the team. I don’t care if I am not on pens as long as there being stuck away.”

Pierce then turned provider crossing for Jayden to head home the second goal after the break.

“He has got a great delivery and a few went through the back stick but that just shows that he goes for it every time,” said Jayden. “He puts great pace on the ball and it is a real weapon having him coming onto the ball to cross it.” 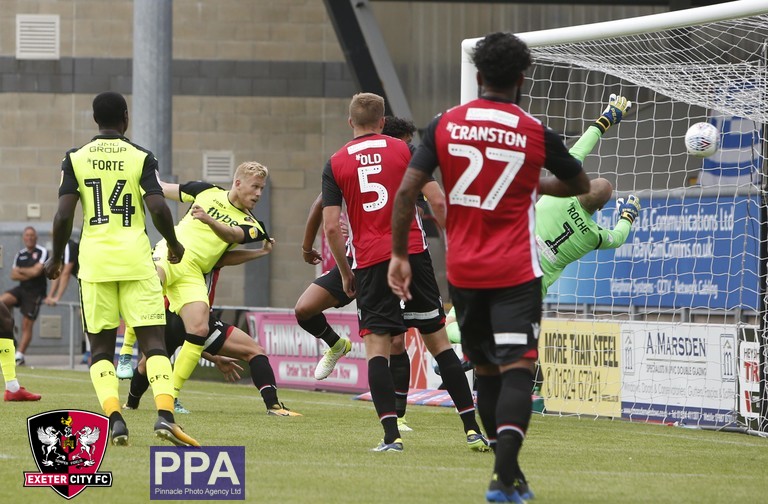 “We wanted to improve after the first half,” added Jayden. “It was a hard journey to get out of our legs and it was tough to get going. Matty and the staff motivated us at half-time. We had the goal at that point and we wanted to protect our lead because last year we came here (to Morecambe) and lost 2-1 after taking the lead. That was in the back of our minds and we wanted to get the next goal and luckily I got it and we could breathe a little.”