Exeter City boss Matt Taylor said last night’s win over Ipswich Town was a good night for the club not just because they knocked a Championship side out of the Carabao Cup, but because they did it with some of their talented youngsters in the team.

Archie Collins and Jack Sparkes – who only have handful of first team appearances between them – came on as second-half substitutes with City trailing in the game to a Kayden Jackson first-half strike. However, added to loanee Tristan Abrahams’ introduction, they added real pace and zip to City’s attack.

And when Sparkes crossed for Collins in the 64th minute, it was the midfielder’s shot who looped up off the keeper for Troy Brown to head home the equaliser. 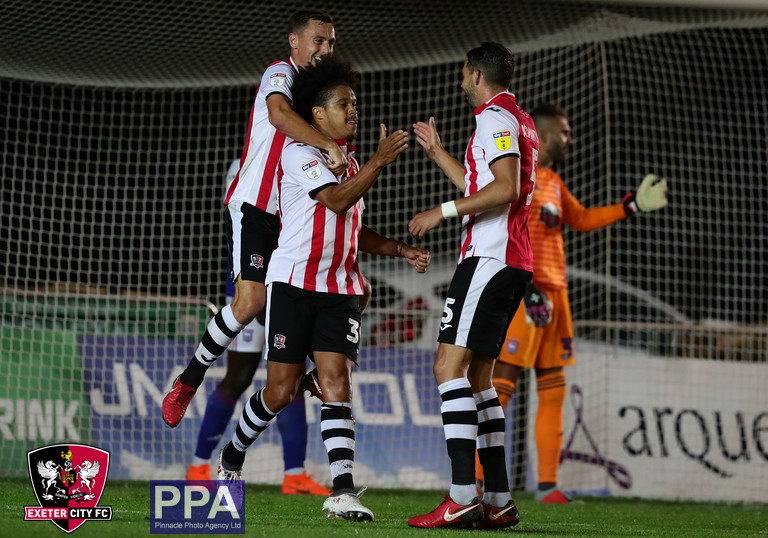 Troy Brown is congratulated on his equaliser

“We are pleased with the result,” said Matt Taylor. “First half I thought we showed them (Ipswich) a bit too much respect.

“We stood off them a little bit, but the substitutions freshened us up.

“They gave us some real fresh legs and we looked like a real running team for the last half an hour. We fully looked like the stronger team towards the end. We created some good chances.

“When it goes to pens it is pot-luck, to be honest with you but we held our nerve.

“I am delighted for the three young boys getting game time. Tristan is obviously on loan, but Archie Collins and Jack Sparkes they are the future of this club. So it was a good night, not just for the result but for the young players coming through as well.”

Ipswich came into the match on the back of a poor start to the season but tested City by naming a strong starting XI. Asked what it will do for the confidence of the likes of Spakes and Collins to play against Championship opposition, Matt added: “It is experience, it is as simple as that. It will improve, enhance and quicken their development.

“They need to play as many games as they can as I need them to be ready for League Two football because they are part of the first team squad.

“They need to be ready for first-team football and League Two football is brutal at times. Archie and Jack have both got a lot of ability. Now they have got to implement that as much as they can on the pitch.

“I was delighted for them both. They attacked game and that is what I want from all my players all the time, but those youngsters gave us that little bit of spark.” 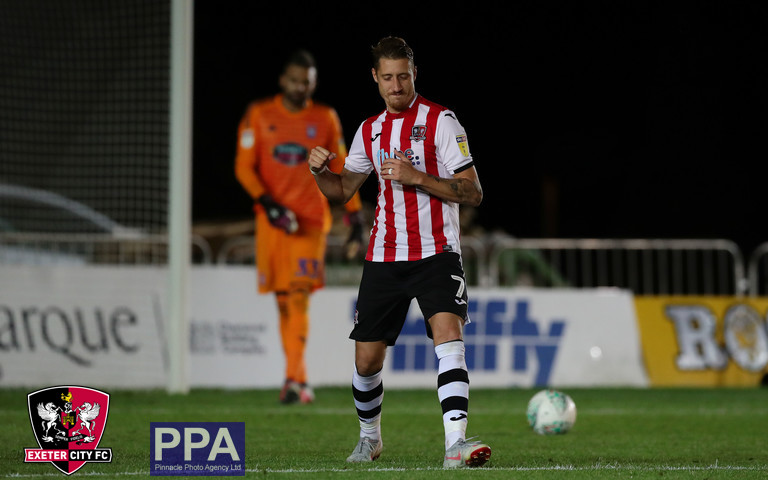 With the match finishing 1-1 after 90 minutes, the game went straight to penalties. Pierce Sweeney got City up and running, before goals from Abrahams, Collins and man-of-the-match Lee Martin secured City’s progress to the next stage.

“The players took the confidence they gained from the second half performance into the pens,” added Matt. “Ipswich are a top, top team and, at times, we looked like we could match them if not better them.

“I am delighted with the second half performance. Penalties are penalties. To win on penalties is the best case scenario, to lose is heartbreaking. So they (Ipswich) have got a long journey back and I wish them all the best for the season, but I am excited about who we get in the next round of this competition.”

The draw for the next round of the Carabao Cup will be made at 7pm on Thursday. Tickets for the game are not expected to go on sale until early next week.