City will be looking to extend their unbeaten start to the season. Here’s what to expect from the Exiles…

Newport County AFC are based in the city of Newport, South Wales. Their home colours are amber shirts and black shorts.

Newport County AFC were most recently reformed in 1989, the club is a continuation of the Newport County club which was founded in 1912 and was a founder member of the Football League's new Third Division in 1920.

The Exiles won the Welsh Cup in 1980 and subsequently reached the quarter-finals of the UEFA Cup Winner's Cup in 1981. The club was relegated from the Football League in 1988 and went out of business in February 1989.

The club reformed shortly afterwards and entered the English football league system at a much lower level. In 2013 the club won promotion back to the Football League for the first time since 1988.

Newport County have been led by Michael Flynn since 2017, following an extensive playing career including four spells at Newport, where he made five appearances while first team coach in early 2017.Flynn was made permanent manager after helping the Exiles survive relegation as caretaker manager, a move which prompted his retirement from playing.

Newport County played an impressive seven pre-season friendlies ahead of the 2018/19 season, with varying results. They started pre-season with two draws, 2-2 against Championship side Bristol City and 1-1 against Undy Athletic, before losing two in a row to Chippenham Town and Swansea City, both with final scorelines of 1-0. The pre-season improved slightly from there, with a 0-0 draw against Pen-y-Bont and a 2-0 win against Hereford, before concluding with a 3-1 defeat to Stoke City Under-23s.

The Exiles opened the 2018/19 EFL League Two campaign with a 3-0 loss to Mansfield Town, but followed that up with a 1-0 win over Crewe Alexandra. Newport picked up an impressive 4-1 win away at Cambridge United in the Carabao Cup this week, which has set up a second round tie with Oxford United.

Padraig Amond
2017 signing Padraig Amond has made his mark on the goal as top scorer in the 2017/18 season, with 13 goals from 37 appearances and three goals during pre-season, against Bristol City, Stoke City under-23s and Hereford. 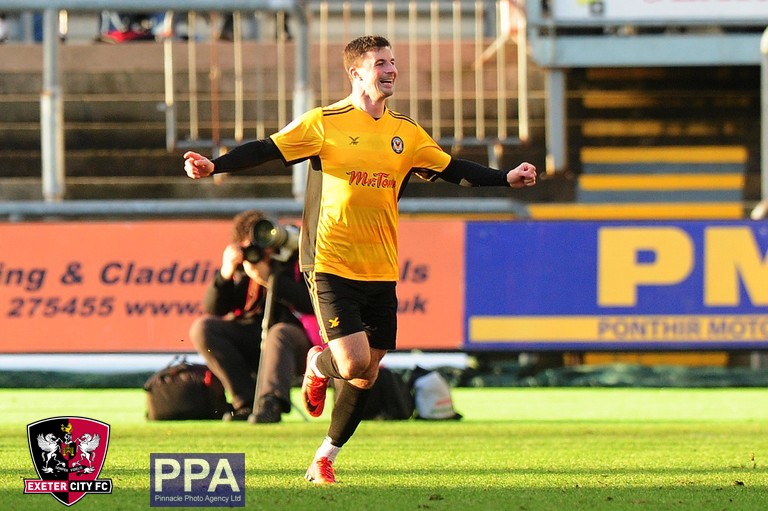 Amond is a fan favourite at Newport, and has represented his native Ireland under-21s, winning four caps in 2008. Amond has already made it clear that he’s confident in the Exiles’ attacking ability, and will definitely be one for City to keep an eye on during the match on Saturday, August 18.

The last time the Exiles and the Grecians met was New Years’ Day 2018, where they suffered a 2-1 defeat away at Newport, despite a spirited second half performance. The first half was lacking in chances for Exeter, who fell behind following a header from ‘one to watch’ Padraig Amond before equalising early in the second half. The Grecians fell behind again on 65 minutes, and despite a close shot in added time, the game ended with the Exiles winning 2-1.

The last time the two sides met at St James Park in September 2017, Lee Holmes' second-half strike is enough to win it for the Grecians as another strong defensive performance give them another clean sheet and keep the Grecians top of the table.

Make sure you are part of the action. By booking tickets in advance you can save money and time queuing on match day.

The IP Office Main Stand is currently sold out for the match but keep checking tickets.ecfc.co.uk in case there are any returns.