City got back to winning ways last time out with a 1-0 win over Crewe Alexandra at St James Park last weekend thanks to Lee Martin's screamer.

The win moved the Grecians into 7th and back into the familiar territory of the play-off zone ahead of a busy festive period coming up.

Next up for the Grecians is a trip north to fellow promotion hopefuls Oldham, who sit three places and two points behind Exeter.

Saturday’s opponents are undefeated in their past six league games, have not lost at home since October and should provide a stern test for Exeter.

Here is everything you need to know about Oldham:

The Latics formative years were very enriching years for the club who were runners-up in the Second Division in 1910, before falling just short of a maiden First Division title in 1915 having to ultimately settle for 2nd place.

While Oldham have competed at the top table, they have also found the FA Cup a happy hunting ground, reaching the semi-final in 1913.

They reached the semis once again in 1990, before famously bowing out to Manchester United after forcing a replay following an exhilarating 3-3 draw.

That very same year saw Oldham reach the League Cup final and a year later they won the Second Division, becoming a founding member of the inaugural Premier League, spending two season there before relegation in 1994.

After racking up close to a century of appearances for Oldham during his playing days, Frankie Bunn took the ultimate step up by taking the managerial reigns in the summer. 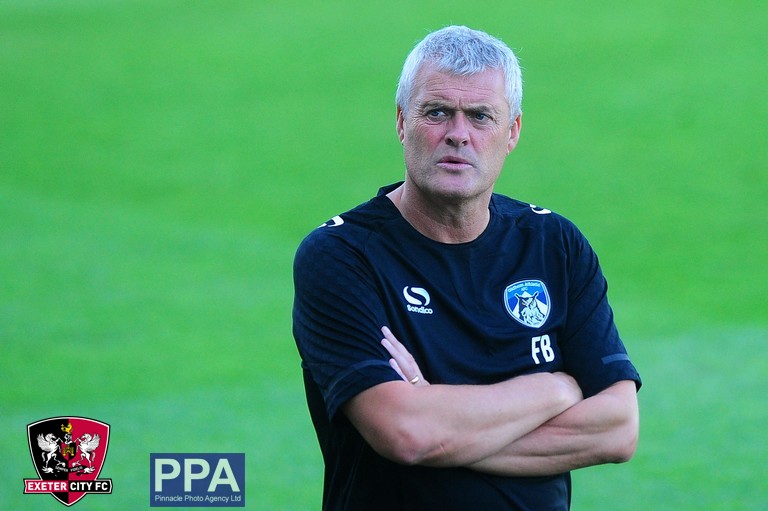 That followed the club’s relegation from League One last season and Bunn has overseen a surge of form with the Latics pressing for an instant return to League One.

Boundary Park has housed the club four years after since its inception in 1895. Prior to that Oldham County were the stadium’s tenants before they ceased to exist in 1899 and Oldham Athletic subsequently moved in.

An FA Cup tie in 1930 between Oldham and Sheffield Wednesday holds the record attendance to this day of 47,671. A league match against Blackpool in the same year saw 45,304 people attend.

The 20 year-old striker on loan from AFC Bournemouth is the man the Grecians need to be wary of at Boundary Park on Saturday.

Despite his tender years and relative inexperience in the Football League, he still leads the goalscoring charts at Oldham with seven goals to his name. 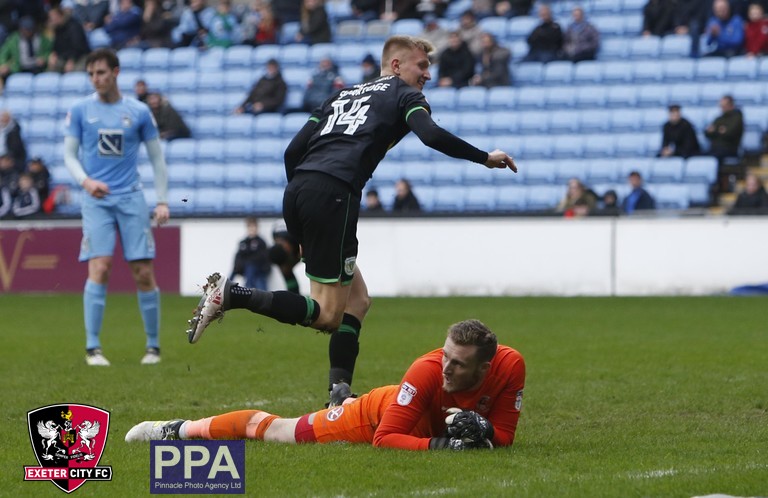 That follows a successful loan spell at Yeovil last season when the young starlet hit double figures for the club. Exeter will have to be very wary of the threat he poses.

December has heralded an undefeated month in the league for the Latics thus far with their most recent defeat coming on November 3rd.

A minor blip came in the form of local rivals Rochdale who knocked them out of the EFL Trophy last week, but the Manchester-based side continue their ascent up the table following a fine run of form. 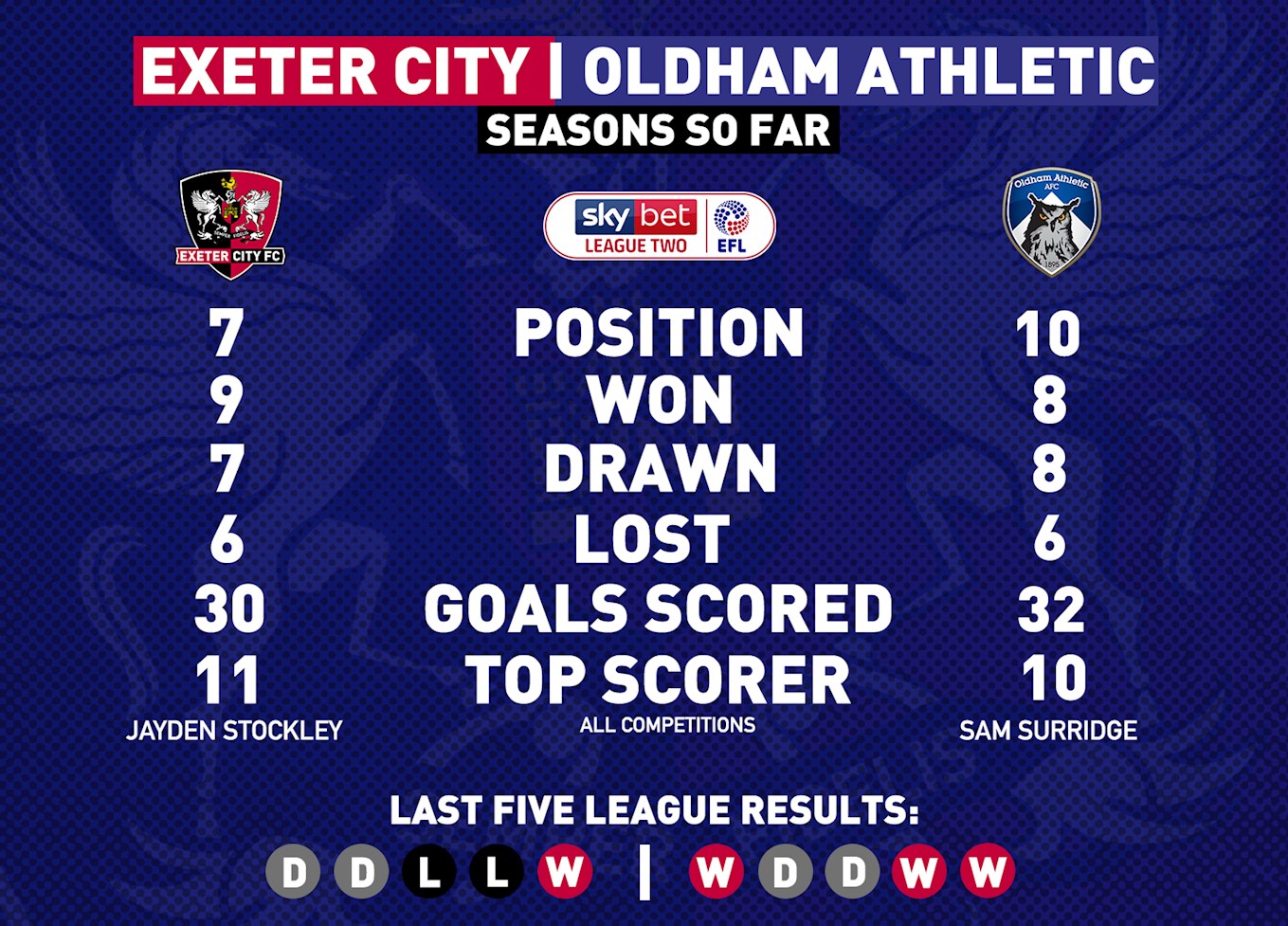 A run of five successive defeats at the start of the season consigned the Latics to the very real proposition of a relegation battle right from the get-go.

Those fears were not alleviated as by matchday ten, Oldham had suffered seven defeats, including a recent 5-1 drubbing at the hands of Rotherham United and were sitting in 23rd.

A woeful December and January which bore a solitary win culminated in Oldham languishing in 22nd and even an impressive EFL Trophy cup run into the quarter-finals failed to mask an abject season.

Despite a torturous season, it went straight to the final day as the Latics’ fate was sealed after a 2-2 draw at fellow relegated-side Northampton Town.

The drop to League Two marked the end of a remarkable run of 20 consecutive seasons in the third tier for Oldham.

Exeter picked up an invaluable point at Boundary Park in their efforts to stave off relegation to League Two.

Chances fell for both sides, but the out-of-form sides both had to settle for just a point.

Goals from Daniel Nardiello and Guillem Bauza gave the Grecians an all important league victory at St James Park and only their second of the season so far.

For Oldham it was only the second time they had suffered back-to-back defeats this season after losing their two opening league fixtures in August.

Advance tickets are available for City's trip to Boundary Park to face Oldham Athletic on Saturday, December 22 in a 3pm kick-off until 12noon on Friday, December 21 online and 2pm in person.

To buy tickets online please click here. You can also call the club during the normal office hours on 01392 411243 or visit the club shop & reception in person between 9am and 5pm Monday to Friday

Ticket prices in the Chadderton Road Stand are as follows:

Matchday Purchase available? YES, available in store or cash on the turnstiles.

Grecian Travel: The supporters coach to the Boundary Park departs at 07:30am and is £36 per person. Please click here to find out more.