Having started his career off as a trainee at Manchester United, playing alongside the likes of Rio Ferdinand, Roy Keane and Paul Scholes, Daniel Nardiello went on to have a long and distinguished playing career in the English Football League picking up play-off winning promotions with Blackpool and Barnsley. Now a financial advisor, Daniel – a former Grecian and Welsh international – talked about the best player he played with, his favourite goal and many more moments from his career.

The first goal of my career came when I was on loan at Swansea City from Manchester United. I can’t remember who we were playing (Southend United), but I was only 18. It was down at Swansea City’s old ground – the Vetch Field – and it wasn’t a worldy by any means. It was a bit of a scrappy affair in the box and I slid in, with the defender, and I got there first and got a left foot on it and it is has trickled in the far bottom corner. It was nice to get my first goal in professional football.

I made my first senior appearance against Arsenal at Highbury for Manchester United. That was a great experience. I wasn’t expecting to be in the squad at all and then when I was doing some work in the gym, Alex Ferguson came over to me and said: ‘Make sure you are all ready for tomorrow’. I said: ‘What do you mean?’ and he said: ‘I’m taking you with the squad’. Later that afternoon we got a train down to London and I managed to come on for 20 minutes against Arsenal the next day. It was incredible and they had some big name players playing as well so it was nice to not only make my debut for Manchester United, but to do it against a team like Arsenal.

Yes, I can remember getting a flight down and Andy Marriott picking me up and taking me to the training ground. It was great to be at a new club, with a few fresh faces and a new manager. It was a fresh start because I had had a nightmare couple of years at Blackpool with injuries.

Tis (Paul Tisdale) and the physios there said they would sort out my back and help me improve and they did. They helped me with my injuries and it was a great club to be a part of, a great city and I really enjoyed my time there. 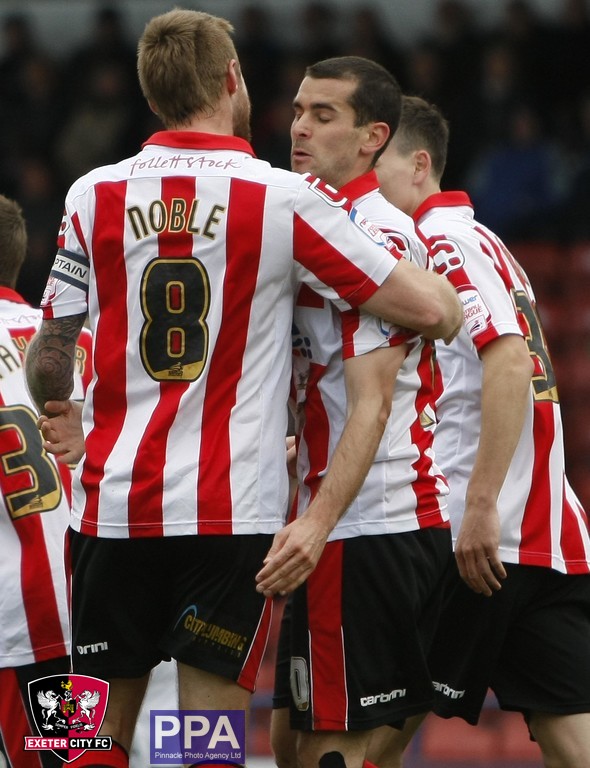 I knew a couple of the faces before I went to Exeter. Richard Logan, I played with him at youth team level for England and David Noble. They are both good characters. I lived with Nobby (David Noble) for a bit while I was in Exeter. Only for a few weeks in the second season, but he was fantastic. He is a great lad and it is the same with Loges (Richard Logan). He is a funny one, but everyone loves him.

It was only for a short while, but it would be Paul Scholes. It was an honour to play next to him. He was just brilliant. He had everything. I only played a handful of games with him but he was probably the best. If I was to say someone who I played with a lot more – 30 or 40 games plus in a season – it would be Nicky Adams because when I was with him at Bury. He just assisted so many goals for me and it was great to play alongside him. For Exeter City, it was David Noble. There were some good players there when I was there, Ryan Harley for example and Scott Golbourne. Scott was great when I played on the left side. He allowed me to have freedom when I played on that left side. He was hard working, up and down, and he had a good technical ability as well. He was great to play with, but in terms of pure ability and being able to run a game – on the ball and passing – it was David Noble. He was fantastic.

...goal for the Grecians

It was that goal against Plymouth. I was really frustrated that day, because I wanted to get on a lot earlier than I did. I literally came on for three minutes and I managed to get one chance and a goal in the last minute. People keep asking me 'what was the best atmosphere you have played in?' And I just remember the atmosphere from that night. It was brilliant. 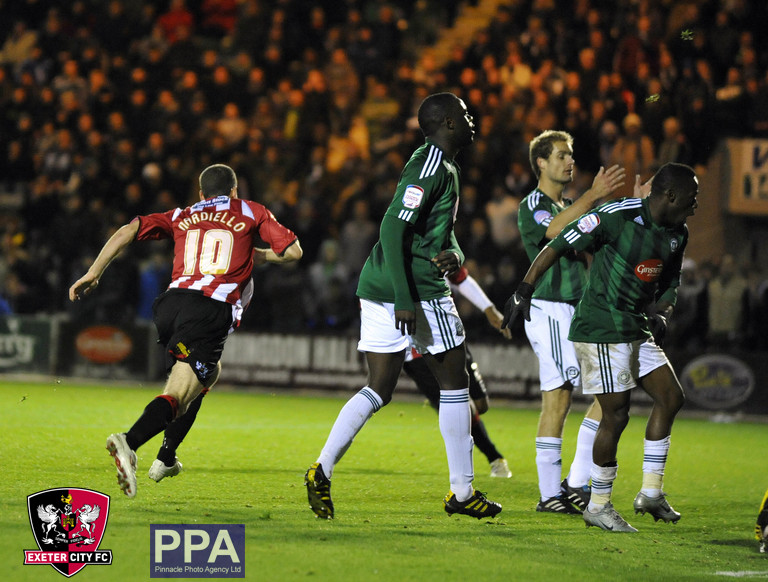 It was like a Milan-derby, it was crazy and it was a fantastic way to win the game. I remember Logie passed me the ball and I took on a couple of players and I thought ‘just tap it towards goal,' because it looked like I could just sneak it in the far corner. Luckily it went in and I just remember seeing a couple of thousand City fans – or however many it was – going absolutely mental. Richard Logan then jumps the advertising board and into the crowd. It was only a JPT game but with the rivalry and the way we won it, in the last minute, it was a bit of a crazy and surreal experience.

I have played for a lot and (Alex) Ferguson was fantastic, but I won’t include him because it was a very limited time I spent at Manchester United under him. So, in terms of my professional career – playing week in, week out – there is a couple that spring to mind. However, I do generally think that Tis pips it for me. 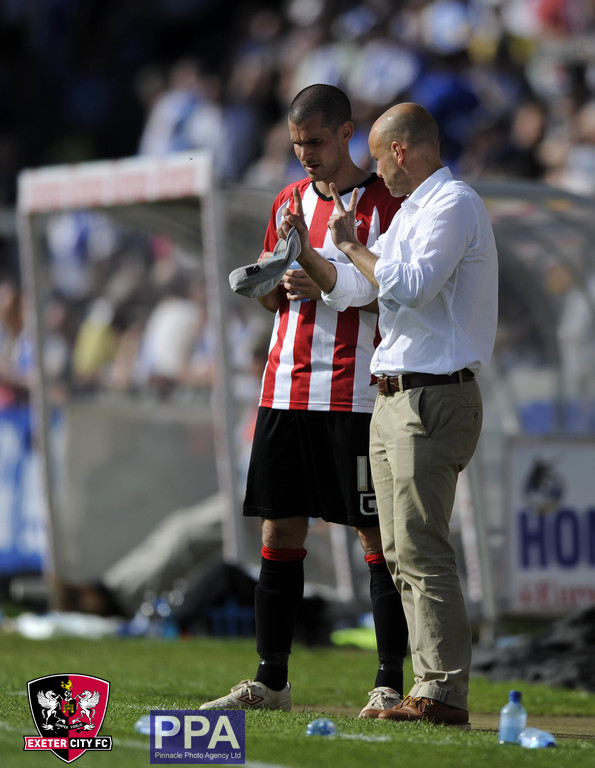 Ian Holloway was great as well at Blackpool, but one thing I admire about Tis is that he is a proper thinker.

He has got his philosophy and he knows how he wants to play and he sticks to that. And even if lads are not doing well, he doesn’t scream and shout and go mental and react. He thinks about it and tries to improve his players, especially the young lads.

He is also very loyal. I think he has been very loyal to his players, loyal to the club. I believe that he has turned down some big jobs in the time that he has been at Exeter and what he has achieved there, with the budget he has had, is phenomenal. I remember the year we finished just outside the play-offs in League One. Obviously, we had talented players but with the budget we had, against the teams that we were competing against, it was a great achievement. That was all down to how Tis runs the club and runs his team. All around he is a top manager and a top man.

...rollicking in the dressing room 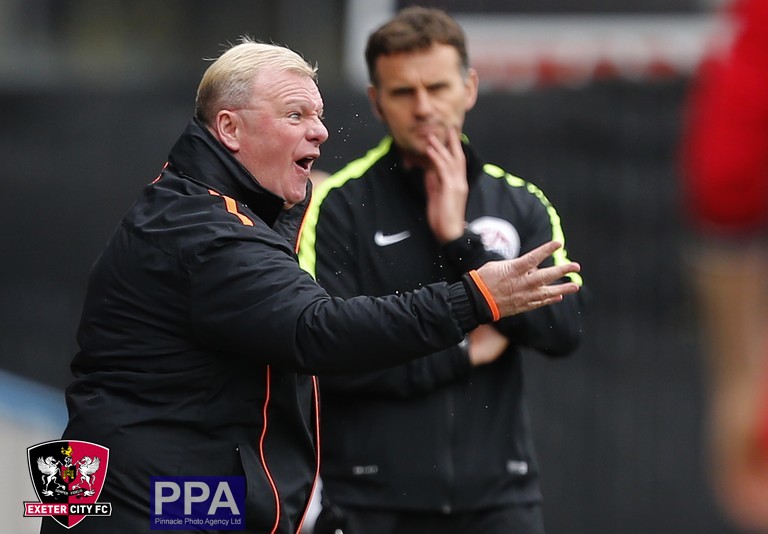 I have had a couple, but the one that sticks in my mind was from Steve Evans. It was a common occurrence with Steve Evans. He is a fiery character, but again a successful manager. I remember one game I had actually scored two goals and he had gone mad at me that I hadn’t scored my hat-trick because I had missed a chance to make it three. I thought: ‘Jesus, I have just scored two in this game’. It wasn’t a rollicking like I have had in the past but it was a still a rollicking, and considering I had scored two goals it is one that sticks in my mind.

...moment in your career?

I have been really lucky. I have had quite a few promotions and some really good times as a footballer, but there is a couple. Relegation for Exeter wasn’t great. It was tough to take, we didn’t want that on our CV and it wasn’t good for the fans or the club. However, the biggest one I’d say was when I got injured two days before the FA Cup semi-final when I was at Barnsley. I was due to play and start at Wembley and got injured. I would have been very proud to have played in that game and I was gutted. It was made worse by the fact that we lost the game and I didn’t get the chance to play in the final. It was a great experience to have the cup run that we did though. We beat Chelsea and Liverpool on the way to the semi-final, it was just unfortunate that I didn’t manage to stay fit for that semi-final game.

...decision given against you?

I remember getting sent-off when I was playing for Exeter against Charlton. I called the linesman a cheat, which was completely wrong and I ended up getting a couple of weeks’ wages taken from me for that. However, the replays and the photographs, afterward, quite clearly showed that the ball had crossed the line. So, the emotion got the better of me because I had scored a goal and they didn’t give it. I ended up getting sent-off and we ended up losing the game 2-0. It was a bad decision from the linesman, but it didn’t excuse my reaction. I was never that calm on the football pitch. I was very calm off the pitch but, on the pitch, I used to lose my head a little bit which I am sure people have seen plenty of times.