The beginning of a long association with the club, the Welshman turned out over 340 times for the Grecians making his name as a true legend of the club. The forward was City’s leading goal scorer in 1959/60 as well as 1960/61 and was a member of the Grecians’ squad that won the club’s first ever promotion, from the Fourth Division in 1963/64.

Ben Strange sat down with the former Grecian in another edition of First, Best and Worst as Rees tells some fantastic tales from his playing days.

That was in September 1954, and we played against Queens Park Rangers. The crowd was just under 9000 and I played on the left wing. We won 2-1, Angus Mackay played inside left. He was a little dark haired Glaswegian, a tough one and he knew how to play. The Welshman, Raymond John was at centre forward. It was a good game for me, Angus looked after me and he was sending me away down the left wing and it was great.

...memory of the City fans

In the match against QPR a supporter sent me a message loud and clear! After a good first half, I had been told by Norman Dodgin, the manager, to get into the box not hang about on the wing. If it was out on the right he told me I’d have to get in and attack the front post, which I did. When a cross came in, which was over hit and went out of play, a guy came over to me and shouted: “Get on your wing, Rees! Stay out wide!” What annoyed me most was that we couldn’t pronounce my name properly! That was my first sample of a Grecian.

...first day at the club

I signed on my 17th birthday. Norman Dodgin had taken me home in his car to persuade my mum and dad to let me sign as a professional. We were in my house and he said to my mum that he wanted to sign me and that he was going to take me back with him to Exeter in the car. She asked when I’d be coming home but Norman explained that this was it, I would be a professional and wouldn’t be coming back. There were a few tears, as I was the only boy amongst three sisters, but the funny thing was that my dad leant across and said: “All the best, son.” I think he was glad to get rid of me as I was one off the household bill. 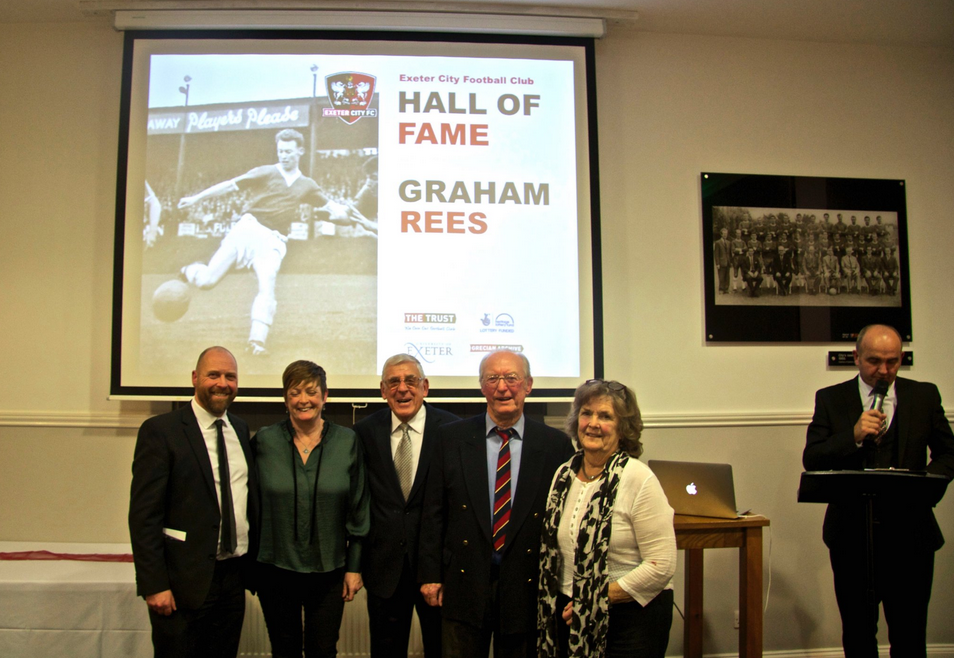 Rees was recently inducted into the Exeter City Hall of Fame

...performance in a City shirt

We played Manchester United in 1960. It was a horrible night, the rain had been pouring down all day, but it meant that we were on a par with them on the day. Nobby Stiles was marking me and I scored the goal which helped draw the match 1-1. When we went up to Manchester for the replay, there was a bit in the programme which said my name and that I was a part-time accountant who gave Nobby Stiles a bigger chasing than the famous Ferenc Puskas had done for Real Madrid. And that will be on my headstone!

...coach you played under

Well, I loved Norman Dodgin who was player-manager when I signed, he was marvellous. Frank Broome was also very good. In 1958/59, we missed promotion by one point and we had a good team, it was great playing under Frank. 1963/64, under Jack Edwards, we got promotion but with arguably a poorer side but we were a family all pulling together and, of course, we signed Alan Banks and he started scoring goals and we worked so hard that year. We went to Workington needing one point for promotion, the strange thing was so did they, and we drew 0-0!

...player you played with

Gordan Kaile was a magnificent left winger, and he took my shirt forcing me to convert to an inside forward. It has to come down to Arnold Mitchell (City’s record appearance holder with 516 matches.) Nearly every game I played was under Arnold, who was captain and a warrior, and he set a fine example to the rest of the team.

...defeat you’ve been involved in

Yes, Northampton away and we lost 9-1. I was the only one dropped after that match and I was playing as a forward, where’s the sense in that? I couldn’t have been that bad!

I’ll tell you the worst dressing room, Torquay United. It was horrible, at one end you had to duck down to change. The ground was on a slope.

...rollicking in the dressing room

We went to Port Vale and I scored a hat-trick, all headers, and we lost the match 5-3. We went in the dressing room afterwards, and I’m not thinking about getting the match ball as we lost. Not a word was said, it was the only hat-trick I scored in the Football League and nobody said a word! I was disappointed that my achievement was missed, then again, how can you congratulate anyone when you’ve lost 5-3?