Exeter City midfielder Jake Taylor is targeting the three upcoming home games for the Grecians to build on their recent away wins as Paul Tisdale's side look to keep themselves in the hunt for promotion in Sky Bet League Two.

City bounced back from defeat to Mansfield Town with a dramatic late 2-1 win over Crewe Alexandra last Tuesday when Jayden Stockley headed home in injury time to give the away side all three points.

They then followed that up with a hard-earned 1-0 win over Grimsby Town at Blundell Park where Stockley found the net again, this time from the penalty spot. And after going ahead City defended resolutely even when reduced to 10 men as they held on to an important three points.

After picking up back-to-back wins and looking ahead to three consecutive matches at home, where City have often impressed this season, Taylor said: “Our away form has picked up recently, we’ve got some good results that we didn’t have towards the beginning of the season.

“We’ve got some good home games coming up now and it’s important for us to continue our home form.”

Taylor was also keen to point out that, at this stage of the season, results are the only thing that matter as City look to build for a strong end to the campaign.

He continued: “The most important thing was coming away with three points, and we’ve got that. 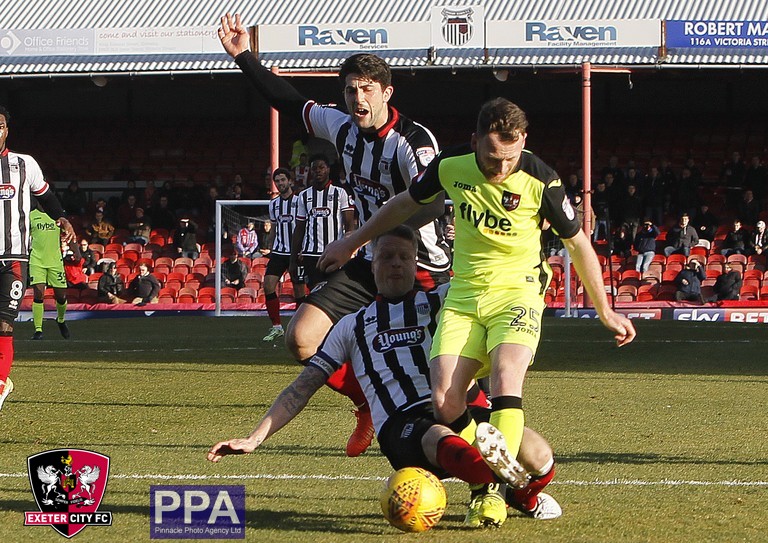 “The only thing that matters is that we come to places like this (Grimsby Town) and take away three points. We’ve worked very hard to keep our shape and nicked a goal against a resilient side.

The Grecians will now look to continue their good run when they welcome Chesterfield to St James Park on Saturday, March 3 ahead of matches with Carlisle United and Yeovil Town.