Jayden said: “It gives us a bit of confidence, walking on to the pitch. It gives everyone at the club a lift.”

City fell behind at Crewe on 88 minutes as Shaun Miller turned the ball home from inside the box. Despite the late setback, City’s heads didn’t drop, and they fought back in style to turn defeat into victory deep in stoppage time.

Captain Jordan Moore-Taylor levelled the scores on 90+2 when he showed sheer determination to fire home after a corner was kept alive. Three minutes later and City were leaving with the three points when Lee Holmes’ stunning cross towards the far post was nodded home by Stockley, his 16th strike of the season. 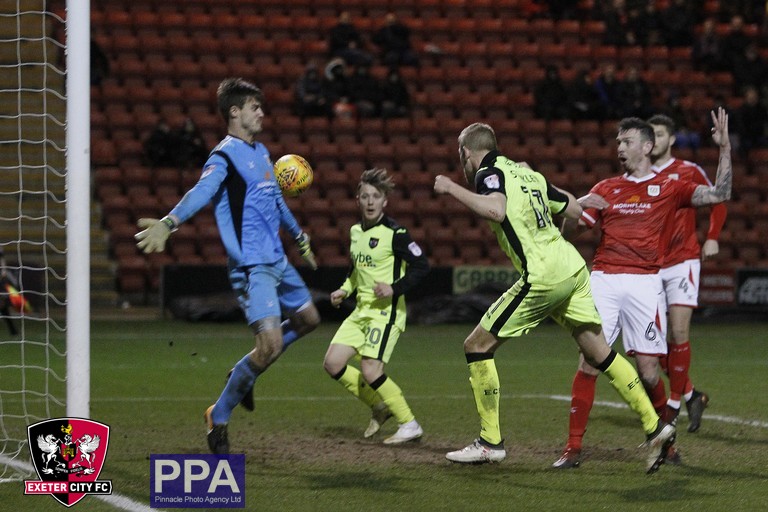 Speaking about the importance of the win, Jayden said: “It’s the best way to win a football match, as much as it takes out of you.

“When they took the lead, you wouldn’t have expected us to come back, but in the dressing room we’ve got so much quality and we dug in. It’s a brilliant feeling.

“The energy and spirit has always been here. We’ve been unlucky recently away from home, peppering teams and not quite getting the result. It’s up to us now to gain momentum.”

The win against Crewe came on the back of a 1-0 loss at home to promotion rivals Mansfield Town. However, Jayden was keen to take the positives from a tough past month, he said:

“We’ve had some tough games this past month that we’ve done alright in. We’ve had some good results, and ones we’ve wanted to change. Overall, it’s not been too bad when you look at the quality of the teams we have played.

“When we lost at the weekend, you can’t get too down. It’s not about thinking we will just go for play-offs now, it’s about looking at the top three now and pushing for momentum.

“Now it is up to us to put a run together and show everyone that we mean business.”

City now face a second long trip in a week, travelling the 600-mile round trip to Blundell Park to face struggling Grimsby Town.

“We’re excited for it.” said Jayden. “It’s now about things coming thick and fast and about doing the right things. The lads that haven’t played so much will get their work done in training.

“It’s also about recovery, having a lot of rest when games come thick and fast. You don’t get a lot of training days because your preparing for the game and the next opposition.

“We are looking to Grimsby and the quality they have got. It will be a different test I’m sure.”