Exeter City have made it through to the knockout stages of the Premier League Cup as goals from Ryan Loft and Alex Byrne gave them a 2-0 win over Sunderland.

The victory, at St James Park, moved the Grecians to the top of group H – four points clear of their opponents – with just one game left to play.

Sunderland, needing a positive result to keep their chances of qualifying for the knockout stages alive, named a strong side for the match in Devon. They had a total of 44 international appearances and more than 200 Premier League games in their starting line-up that included Jack Rodwell, Brendan Galloway, Lynden Gooch and Paddy McNair. 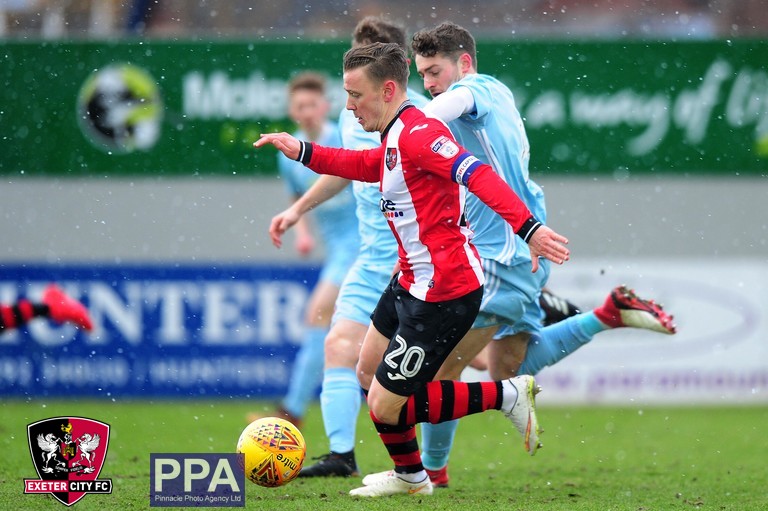 The visitors started brightly, but it was Jack Sparkes who had the first shot on target as he tested Max Stryjek from 30 yards. The Sunderland keeper could only parried the effort though and that allowed Ryan Brunt to have a follow-up shot that was saved.

However, the best chance of the half fell to Loft but when he was played in on the left side of the box his shot beat Stryjek but cannoned off the inside of one post onto to the other and then into the grateful arms of the Sunderland keeper.

City, having grown into the match, started the second half well with Matt Jay hitting a free-kick on target and Archie Collins forcing Stryjek into a great one-handed stop with a powerful header.

So, it was a deserved lead when Loft netted in the 64th minute. Collins was the provider as he delivered a pin-point cross from the right for the on-loan Tottenham striker to nod into the bottom corner.

Ten minutes later and it was 2-0. This time the cross, from a corner, came into the near post where Byrne glanced an effort past Stryjek.

The young Grecians were not severely tested by the visitors in the minutes that remained and saw out the victory comfortably to qualify and set-up a winner tops the group match away at Brighton on Monday, February 26.