This week marks 13 years since Exeter’s famous trip to Old Trafford in the Third Round of the FA Cup in 2005.

City managed to hold Premier League giants United to a 0-0 draw on January 8, 2005 in a game which drew national headlines and saw the Red Devils make a trip down to St James Park for the replay. 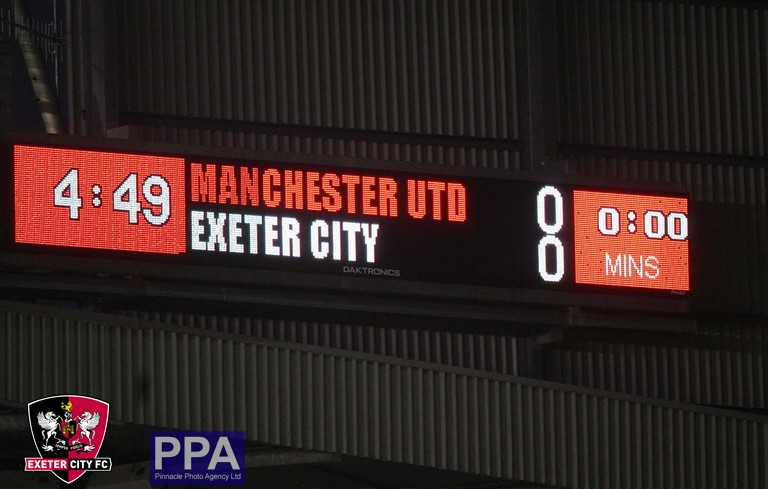 More than a decade on, Dan Gottschalk takes a look at the City team that started the match that day and asks, where are they now?

Alex Inglethorpe (Manager)
Alex Inglethorpe spent most of his playing career at Leyton Orient, although did turn out for Exeter City 19 times after singing for the Grecians in the summer of 2000.

After making his managerial debut with Leatherhead, Alex was appointed Exeter boss in 2004 and stayed with the Grecians until 2006, the highlight of his tenure being to lead the Grecians out at Old Trafford. 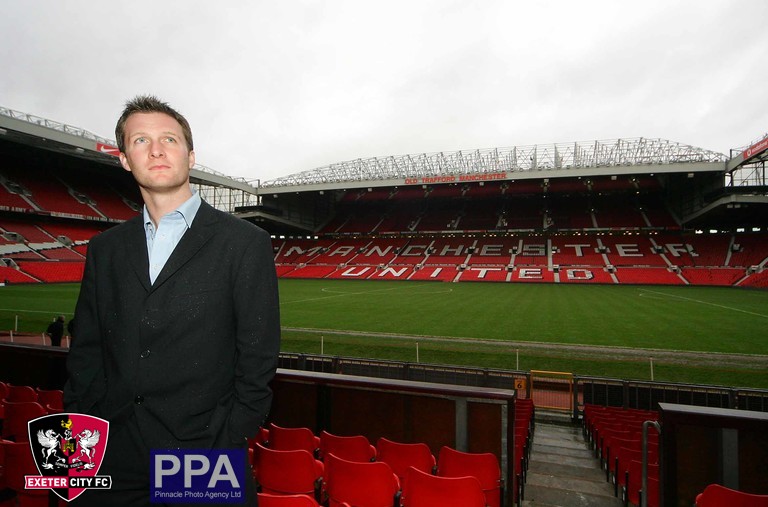 After leaving St James Park, Alex became part of the coaching team at Tottenham Hotspur until he joined the Liverpool as reserve team coach when Brendan Rogers was appointed. These days, Alex is the Academy Director at Liverpool, a position he has held since 2014.

Paul Jones
At the young age of just 18, keeper Paul Jones, then on loan from Leyton Orient, was given the nod to start in goal at Old Trafford and put in a stellar performance. 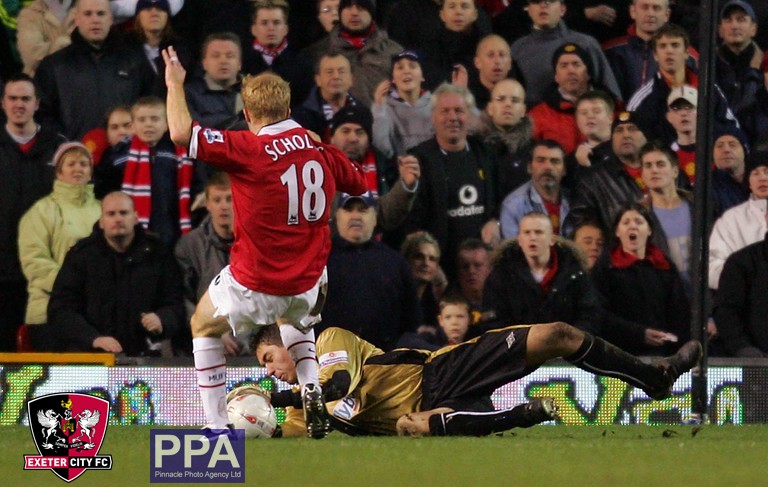 Paul has spent the best years of his career with Exeter City and became the first player to ever save a penalty at the new Wembley, having done so in the 2007 play-off final.

After leaving the Grecians in 2011, Paul went on to make appearances for Peterborough, Crawley and Portsmouth and this month re-joined Exeter City on loan from Championship side Norwich City.

Scott Hiley
After initially joining the Grecians as an academy graduate in 1986, Scott played more than 200 games for the Grecians in his first spell with the club. After leaving Exeter in 1993, Scott went on to gain Premier League experience with Manchester City, Southampton and even captained Portsmouth before eventually returning to St James Park in 2002. 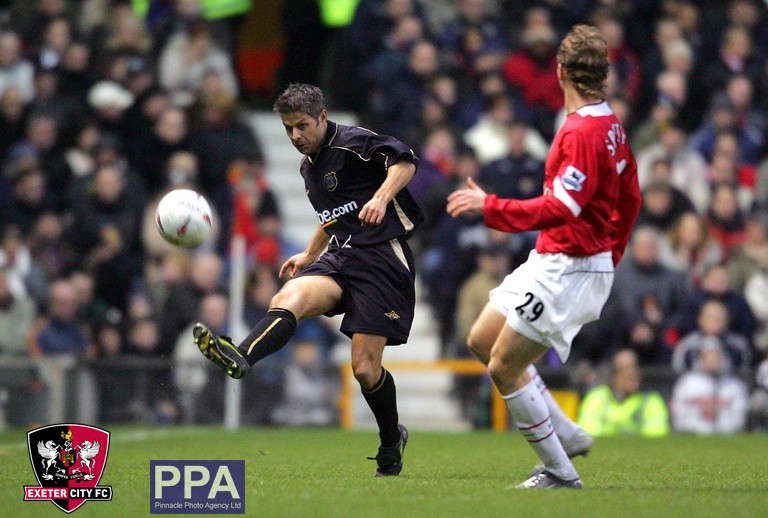 Famously in the Cup replay against Manchester United at St James Park, Scott nutmegged Cristiano Ronaldo, much to the delight of Grecians fans.

These days, Scott runs a Bed & Breakfast just outside of Exeter having retired from football in 2009 after playing a handful of games for Cullompton Rangers.

Gary Sawyer
Having come up through the ranks at Plymouth Argyle, Gary Sawyer was on loan with the Grecians for the trip to Old Trafford. Over the course of his two year spell at St James Park, Gary made 62 appearances and is now back with Plymouth for his second spell with the club after playing for Bristol Rovers and Leyton Orient. 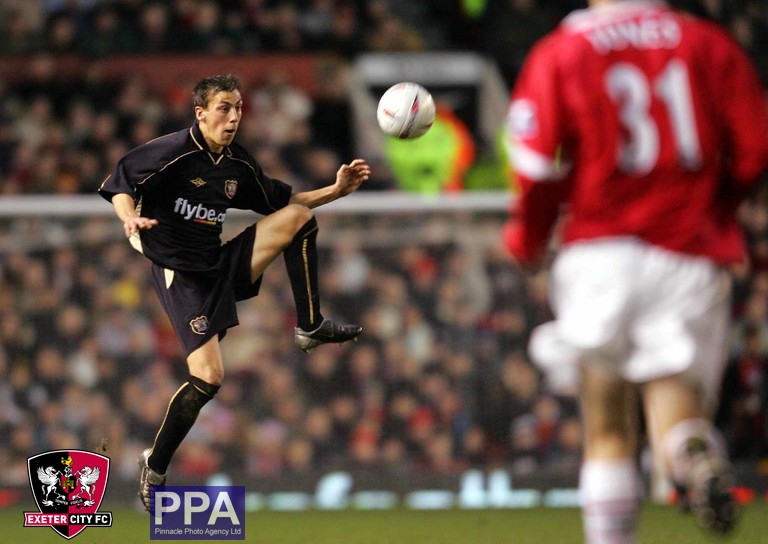 Santos Gaia
Brazilian defender Santos Gaia made 122 appearances for the Grecians during his four years with the club having joined in 2002.

After leaving St James Park in 2006 to join Stevenage Borough, Santos played for a number of teams including Grays Athletic, Halifax Town, Weymouth, Crawley and Truro before eventually retiring in 2010 to move back to his native Brazil.

Alex Jeannin
After playing for a number of sides in his native France, Alex came to Exeter in 2003 to find his feet in English football.

The 6ft left-back whose only previous experience of English football was half a season with Darlington in 2001, made over 90 appearances for the Grecians before moving on in the summer of 2005 to Bristol Rovers.

Alex most recently joined Weymouth in 2011, seeing out the rest of his playing career with the Dorset club.

Marcus Martin
A Plymouth Argyle youth product, Marcus joined Exeter City on loan but struggled to nail down a place in the side, making just 12 appearances. The most significant of these coming at Old Trafford.

After leaving Exeter, Marcus went on to play for Truro and even turned out for the Cornish side in their FA Vase final appearance at Wembley.

Most recently, Marcus was playing for St Austell although he left the club in 2016 in controversial circumstances after an on-the-pitch fracas with the referee following his dismissal.

Danny Clay
After coming through the Exeter City academy, Danny Clay made his first team debut in 2003 and despite struggling to hold down a starting spot, played for the club at Old Trafford.

Andrew Taylor
Andrew Taylor looked like a promising prospect coming through the youth ranks at Manchester United. However, blighted by injury, the midfielder eventually joined Exeter in 2003 and returned to Old Trafford in the FA Cup in 2005.

Andrew stayed with the Grecians until 2008, making 109 appearances and helping Exeter to promotion back to the Football League before joining Truro.

Andrew’s career never managed to hit the heights it may have done however and after training to become a Strength and Conditioning Coach, started his own Management and Conditioning Company, Taylormade, to help people rehabilitate from injury.

Dean Moxey
One of Exeter City’s best academy graduates, Dean made his professional debut in 2003.

After spending six years with the Grecians, Dean left for Derby County for a reported £300,000 in 2009 before going on to play in the Premier League with Crystal Palace and later turn out for Bolton. 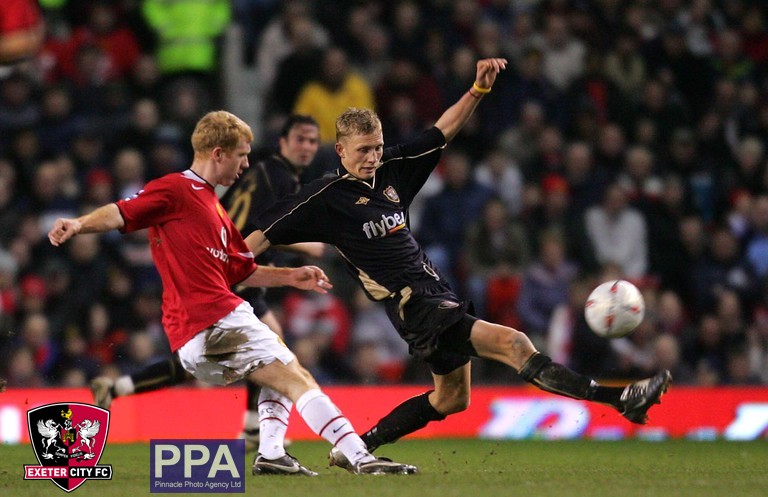 Dean would return to Old Trafford in 2011 with Crystal Palace and go one better than he managed to with the Grecians, beating the Red Devils 2-1 after extra time with the Eagles to reach the League Cup Semi-Finals.

In the summer of 2017, having helped Bolton to promotion from League One, Dean was released by Wanderers and re-joined Exeter City.

Sean Devine
After starting his career at Millwall in 1991, Sean came to Exeter from Wycombe in 2003. Over the course of his time with the Grecians, Sean made 93 appearances, including one at Old Trafford before leaving to join New Zealand Knights in 2005. 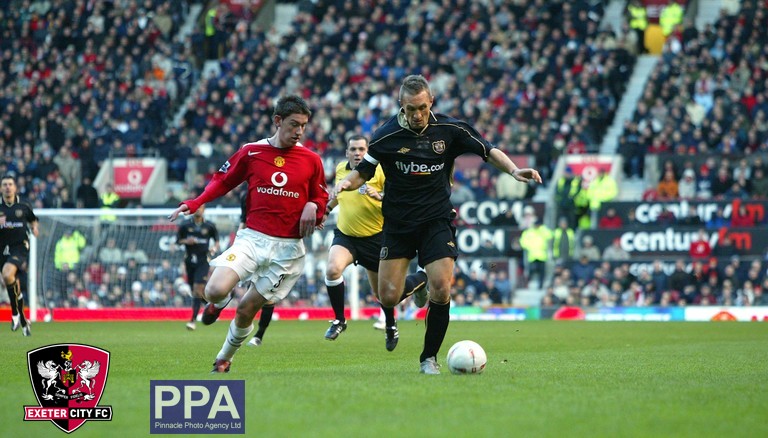 Sean eventually retired from playing football in 2008 but continued his career as a coach, joining the backroom staff at Canterbury United in 2013 before taking over as manager of Newton FC in Ireland in 2017.

Before becoming a footballer, Steve was a professional boxer and a stand-up comic, eventually settling for football when he joined Cardiff in 1995. 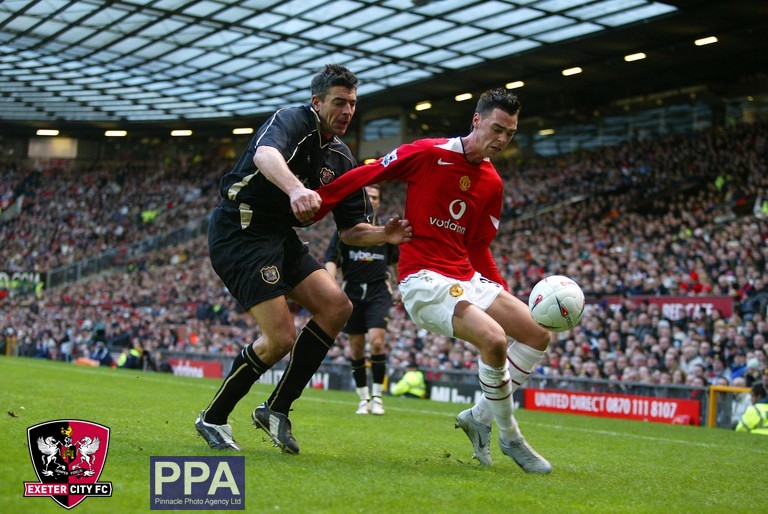 Steve came to Exeter soon after though and played the best part of his career with the Grecians, scoring 86 times in 268 appearances, despite reported interest from a host of bigger clubs.

Since leaving football, Steve has settled down in Honiton and now runs his own building company, Steve Flack Building.

Watch the best bits of the match👇