Exeter City defender Aaron Martin says he is settling in at the club well and has been impressed with the setup at St James Park since arriving as the Grecians’ first summer signing.

The 28-year-old joined City following his departure from Oxford United and has had a couple of weeks to get to know his new coaches and teammates.

On how he has taken to life at St James Park, Aaron said: “It has been good, I’ve enjoyed it, and I’ve been really impressed with everything. It has been a really good start, especially with the game the other night (a 6-0 win over Truro City), and how we went about it. 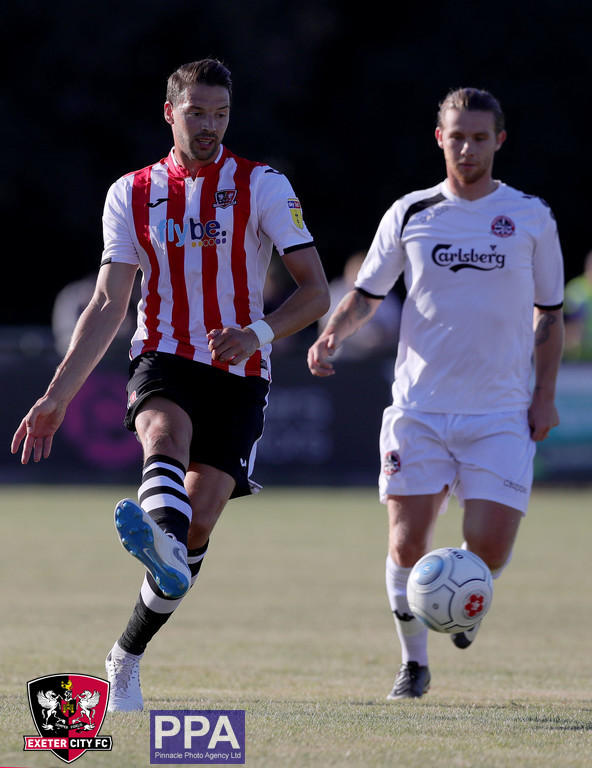 “The standard has been great. Everything has been sharp, everyone is fit. The first game went really well, it’s been a really good start and I’m extremely impressed. I’ve told everybody how impressed I’ve been so I’m looking forward to getting started now.”

The Grecians have also added to their coaching staff in the form of Andrew Wiseman who has become the club’s first full-time Strength and Conditioning Coach, and Aaron says the squad have reacted well to the new structures in place.

He continued: “He (Andrew) has been brilliant. All the boys have really warmed to him, he has had everything spot on so far, he’s done really well since he’s come in.

“I don’t think anybody really enjoys pre-season! Well, the running side, but it is what it is, you have to come back and get fit. Some players may enjoy it, I enjoy some of the running and seeing how far you can push yourself.”

Aaron also believes that the hard work put in during pre-season will benefit the side throughout the 2018/19 campaign as Matt Taylor’s men work on both fitness and tactics ahead of the season curtain raiser at St James Park against Carlisle United on August 4.

He said: “It’s so important to get it right, to do things right and to start the season right. The gaffer has been spot on and I can’t see any fault in anything that we’ve done.

“He (Matt Taylor) has been great, I’m already learning off him as well as everyone else. All the sessions are really well thought out. It’s been really good.

“Everybody is playing for their place and nobody is coming in to just play. Everyone has to earn the right to play and you have to do that in every game with every chance you get.”