Exeter City manager Matt Taylor says his players got their rewards for the 'honest work' they have put in during pre-season following Saturday’s 4-0 win over Bristol Rovers.

It was the Grecians final game of the warm-up fixtures and takes their tally of pre-season victories to five from six games, with 19 goals scored and three conceded.

However, Saturday’s win over Rovers was perhaps the most striking of the wins as it comes against League One opposition. The match itself was slightly more balanced than the scoreline suggests but  Taylor says that result was a reward for the hard work during the last four weeks.

“The scoreline wasn’t a fair reflection on the game – we know that,” said Matt. “Bristol Rovers caused us a lot of problems at times and we had to defend our box extremely well.

“However, I was pleased with the performance. You go away from home and you want a clean sheet first and foremost and the goals were a bonus on top of that.

“The most pleasing thing is not only today’s result it is how the players have gone about their work for the month. I have come into the job. It is a new face, new staff, new players and they have been so honest during the month and they have got their rewards from it today.”

City had to withstand some early pressure from Bristol before Jonathan Forte opened the scoring with a near-post finish. Dean Moxey then made it 2-0 from a corner before Hiram Boateng curled home a wonderful finish seven minutes before the break.

“I wish he (Hiram) had saved it for next week, but he has got that in his locker,” smiled Matt. “The fans saw it last season in the semi-final (against Lincoln) and when he opened his body out and hit it with his left foot we were right behind it and it was going in all the way.

“It was an unstoppable shot and it shows he was thinking the right thing at the right time. H is a good player, but it was very much a team performance today.

“It was another pleasing performance, regardless of the scoreline. We looked fit, ready and well prepared.

“The lads went about their work in the right manner and they got their rewards.” 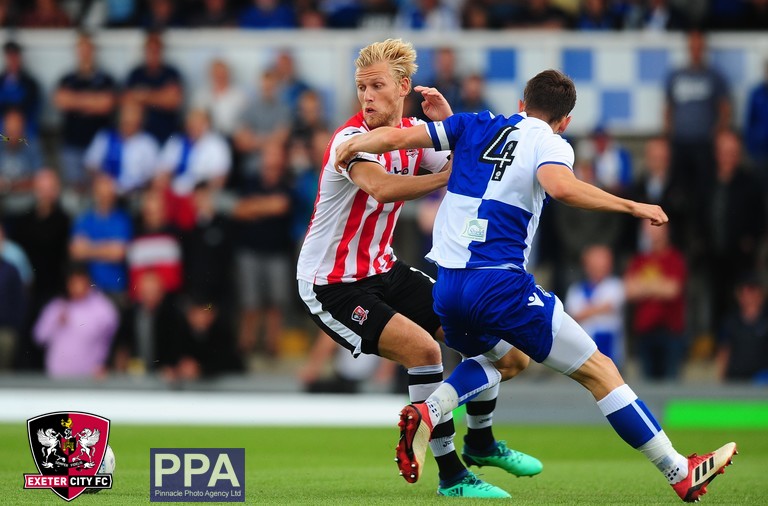 Another pleasing thing for Matt was the fact that City scored two goals from corners – Troy Brown adding the fourth goal from a cross into the box in the second half. It was something City excelled at last season and Matt is hoping that continues.

“It has been a strong point of ours over the last couple of years and it will hopefully continue to be our strength,” he said.

“We have got people who want to attack the ball. The delivery has got to be right and the lads have got to hit their zones and hit their zones with purpose and today there was a real desire to score.

“However, as good as we were in their box – and we got our rewards with the four goals we scored – we were excellent in our box as well defensively.”