The Grecians have been active in the transfer market in recent weeks as manager Matt Taylor readies his squad for the upcoming 2018/19 season.

So, we’ve decided to give you the lowdown on our latest recruits at St James Park…

Aaron was the first new face to come through the door at St James Park, arriving following his release from Oxford United at the end of last season.

The central defender brings a great deal of experience to the City backline and has played much of his career within the higher leagues of English football. 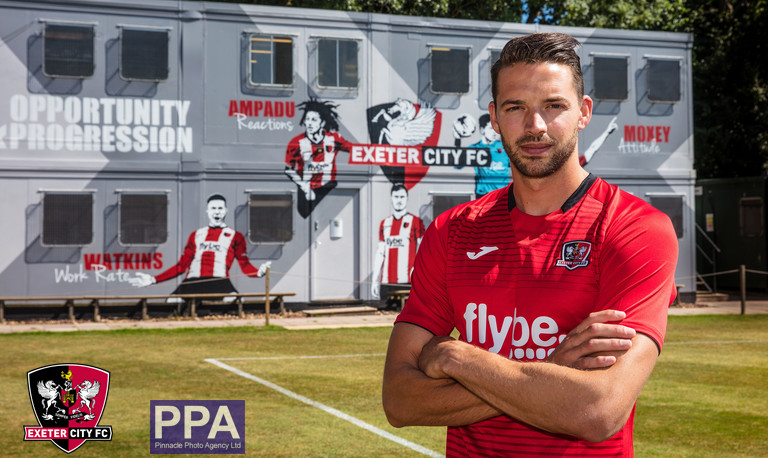 As a youngster, Aaron played for non-league side Eastleigh before being picked up by Hampshire giants Southampton in 2009. He spent five years on the books with the Saints, making 29 appearances in total, and also had loan spells with the likes of Salisbury City, Crystal Palace and Coventry City.

A brief spell with Birmingham City followed in 2014 before he made his first move to the west country to join, then League One side, Yeovil Town. Aaron didn’t remain at Huish Park for long though as he found himself on loan at Coventry City before the move was made permanent in 2015. The 2015/16 season saw him amass 32 appearances for the Sky Blues as he also found the net against Oldham Athletic and Shrewsbury Town.

He then made the move to Oxford United in 2016 on a two-year deal and after making a promising start to his career at the Kassam Stadium, he was then hit by a big injury as he ruptured his achilles tendon which ruled him out for the remainder of the campaign.

After a long road to recovery, Aaron made 19 appearances for the club last season before departing for the Grecians.

What Aaron had to say about his move to City: “Matt (Taylor) got in touch with my agent and then I spoke with him. We’ve had quite a few conversations, I really enjoyed it and I liked what he had to say about the team that’s already here and the people he is bringing in. I was really impressed.

“I liked his whole persona to be honest, with his ideas moving forward, what the club has in store over the next year or two and everything about it really appealed to me.”

Just one day later the Grecians made another addition in the form of striker Jonathan Forte.

The 31-year-old put pen to paper with the Grecians after suffering similar heartbreak last season as his Notts County side missed out in the play-offs last season.

He began his career with Sheffield United where he made his debut in 2003 before having a succession of loan moves to Doncaster Rovers and Rotherham United. The former England youth international then went on to play over 100 times for Scunthorpe United before earning himself a move to Nigel Adkins’ Southampton. First team chances were hard to come by at St Mary’s as Jonathan went on to have loan spells with Preston North End, Notts County and Crawley Town, before returning back to his first club, Sheffield United. 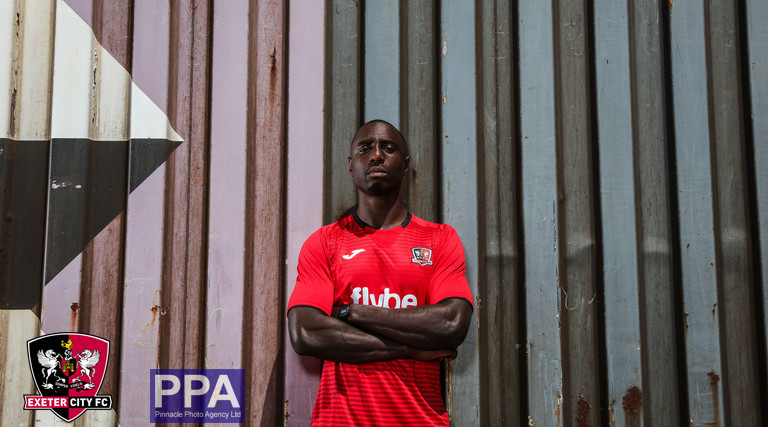 Two years with Oldham Athletic followed where he helped himself to 18 goals over two seasons before moving to Meadow Lane to join Notts County. Jonathan would go on to play 79 times for the Magpies scoring 20 goals ahead of his move to St James Park.

What Jonathan had to say on his move to the Grecians: “It’s great, it’s not taken that long. The second I came down to look at the facilities and spoke to the manager it was near enough a done deal.

"One of the main things, for me, is that he (Matt Taylor) seems genuine which is what I look for. He said that we aren’t the biggest club in the world, but we want to get promoted.”

City’s third summer signing arrived at the club on Monday with Nicky Law joining after his release from League One side, Bradford City.

Nicky will slot into the City midfield, bringing a great deal of experience and he, along with Jonathan Forte, began his playing days with Sheffield United despite being born in Devon. 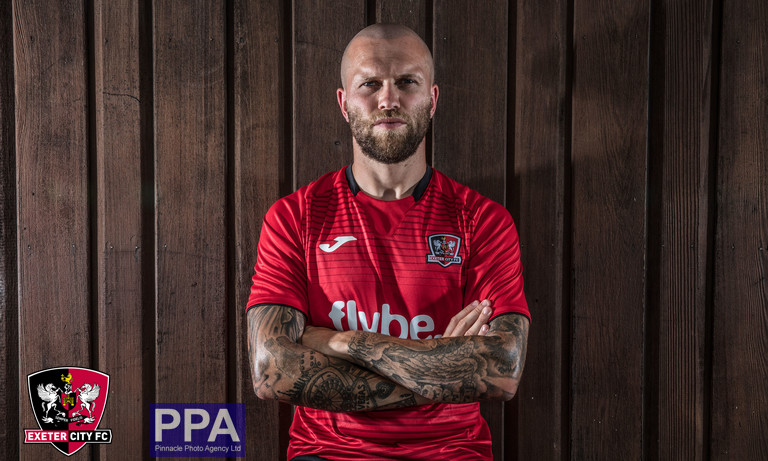 His first spell in the south west came in 2007 when Nicky played a handful of times for Yeovil Town on loan before having his first spell with Bradford City on loan between 2008-2009.

He moved permanently from United in 2009 to join Rotherham United where he played 101 times before moving north of the border to join Motherwell. Nicky continued to play consistently as he clocked up 43 appearances and scored seven times in his debut campaign. Another solid season with Motherwell earned Nicky a move to Scottish giants, Rangers, a place where he helped himself to 10 goals from midfield in his first season at Ibrox.

A move back to Bradford would follow in 2016, where Nicky spent a further two seasons before moving to Devon to join City.

What Nicky had to say on his move to St James Park: “I’m delighted to get it sorted. I came down last week and spoke to Matt and I was really impressed with the facilities here and the direction that the manager wants to take the club.

“The club has gone close over the last two years but the aim this year will be to go one better. I went with my gut and it was telling me to come to Exeter.”

The Grecians’ fourth signing of the summer was youngster Tristan Abrahams who joins the club on a loan deal from Norwich City.

The 19-year-old has had a taste of League Two action before with his boyhood club Leyton Orient in the 2016/17 season. In what was a difficult campaign for the club, Tristan managed to feature nine times in the latter stages of the season, and he impressed as he found the net on two occasions as Orient drew 2-2 with Luton Town before beating Hartlepool United 2-1. 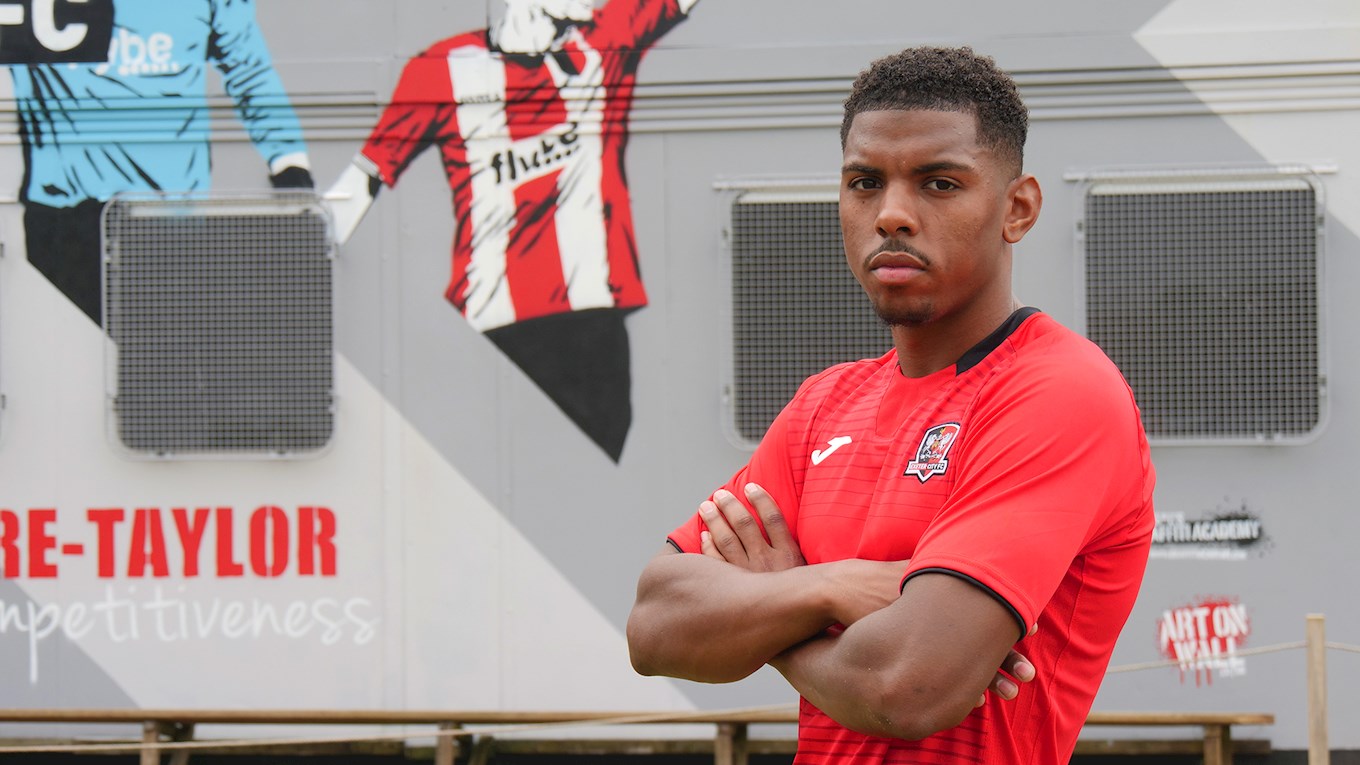 He then caught the eye of Championship side, Norwich City, before signing for the Canaries. The youngster featured for the under-23 side at Carrow Road last season and is ready to play first team football regularly as Matt Taylor adds to his attacking options.

What Tristan had to say on his loan move to City: “I’m very excited, for me it’s an opportunity to get back into men’s football.

“It’s a division that I’ve missed whilst playing in the under-23 side at Norwich, and to get back into men’s football with the passion, the crowd and the whole atmosphere. I scored goals that I’ll never forget.”