Exeter City would like to thank the fans and volunteers who have made the World Cup fan zone at St James Park a resounding success.

More than 2,400 people have watched the six England games that have been shown on the giant TV screen at St James Park.

Demand for tickets to our fan zone have been in high, with two of the group stage games and all of the knockout matches selling out. This has created a wonderful atmosphere to watch England’s progress at this World Cup as we have cheered Gareth and his team all the way to the semi-finals.

Due to the success of the fan zone, Exeter City had planned to show England’s third/fourth play-off match with Belgium at 3pm on Saturday on the giant TV screen. However, after the disappointment of Wednesday night’s semi-final defeat to Croatia, demand for this match has not been as high as the previous six games. 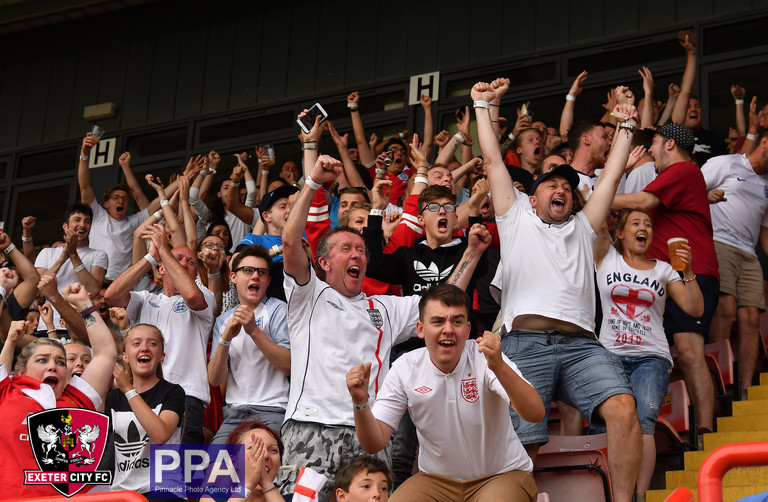 Therefore, with the cost of putting on the event and lots to plan for with the season just around the corner, we have decided to cancel the screening of the third/fourth play-off match on the giant screen early in order to allow those fans who have already purchased tickets to make alternative arrangements. We will also be contacting those people who have already purchased tickets to give them a full refund.

We would like to remind fans that we will still be showing the game in the club’s Centre Spot bar where there will be plenty of drink promotions on offer.

Again, Exeter City would like to reiterate it thanks to the volunteers and supporters who have made the fan zone such a resounding success and we hope to continue with showing England games on a giant screen at St James Park at the European Championships in 2020 and the World Cup in 2022.