First off we take a look at Macclesfield Town, the champions of the Vanarama National League.

The Silkmen were founded in 1876. The club's crest is based upon the coat of arms of Macclesfield, and features a blue Lion Rampant holding a wheatsheaf. Macclesfield are nicknamed 'The Silkmen' because the area used to be famous for its silk mills.

Macclesfield were members of the Football League for 15 seasons from 1997 until 2012, playing in the Second Division (now League One) in the 1998–99 season. The 2018-19 season will be their 16th season in the Football League after winning the Vanarama National League last season.

The managerial position is currently vacant at Moss Rose after John Askey joined League One Shrewsbury Town on June 1. The 53-year-old had been in charge at Macclesfield since April 2013 and guided the Silkmen back to the football league.

The Moss Rose stadium is one of the oldest stadiums in the football league. The ground consists of four stands and visiting Supporters are housed in the John Askey Terrace which has a capacity of 1,530 Terrace and up to 403 Seats.

Scott Wilson
The Silkmen's top scorer with 14 goals in 35 appearances. Scott arrived at the Moss Rose in the summer of 2017 on a one-year deal from Eastleigh and opened his Silkmen account with a stunning goal in the pre-season victory over Bury. 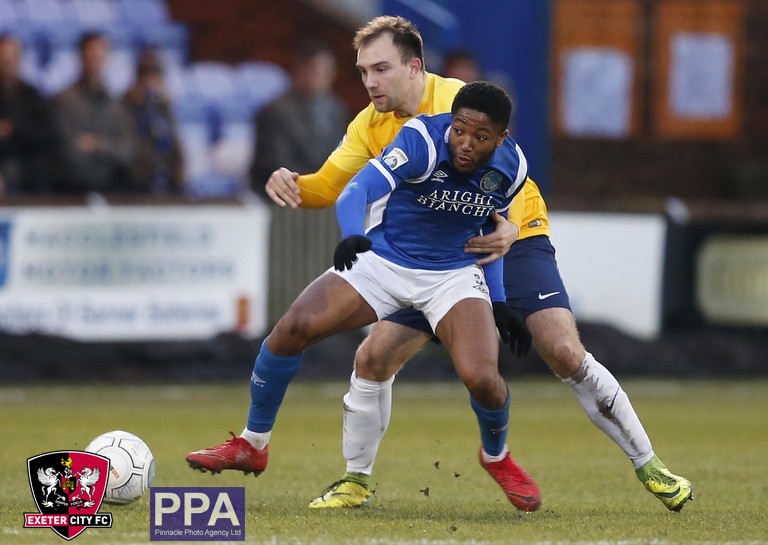 He began his career at the Bristol City academy, and got his chance at senior level at Weston-Super-Mare in June 2015, scoring 24 goals in 42 appearances for the National League South side.

Macclesfield Town ended the 2017/18 season as champions of the Vanarama National League, finishing 10 points ahead of Tranmere in second with 92 points. The Silkmen were among the favourites for relegation from the National League at the start of the season.

On April 21, 2018, Macclesfield beat Eastleigh 2–0 to win promotion back to the Football League after six years playing non-league football.

Exeter City 4 Macclesfield Town 0: February 10, 2009
The last meeting between the Grecians and the Silkmen took place at St James Park in 2009.

City turned on the style to move back into the play-off zone by thrashing Macclesfield thanks to goals from Adam Stansfield, Richard Logan, Neil Saunders and Craig McAllister.

Macclesfield Town 1 Exeter City 4: September 27, 2008
City would do the double that season, winning 4-1 at Moss Rose. Adam Stansfield's double and goals from Ryan Harley and Matt Gill saw the Grecians take all 3 points.

The Grecians would go on to gain automatic promotion to League One and successive promotions, finishing second in the table with 79 points. Macclesfield's finished in 20th place, 10 points ahead of the relegation places.

Fixture release day is on Thursday, June 21, tune in from 9am to find out when City will face the Silkmen in 2018/19.