Today we take a look at Northampton Town who suffered relegation from League One last season.

Northampton were formed in 1897. They play their home games at the 7,798 capacity all-seater Sixfields Stadium now known as the PTS Academy Stadium, their home since 1994.

The club's nickname is 'The Cobblers' which is a reference to the town's historical shoe-making industry.

After seven successive years in League Two, the Cobblers' gained promotion to League One during the 2015/16 season. They would spend two seasons in the third tier and were relegated from League One last season.

Dean was appointed as the club's new manager in May 2018, on a 2 year contract after an impressive spell in caretaker charge of the Cobblers since early April.

He will be tasked with getting the Cobblers back to League One as soon as possible.

Sixfields Stadium, a 7,798-capacity all-seater has been the home ground of Northampton Town since their move from the County Ground in October 1994.

Away fans are housed in the Moulton College stand, which holds 800 fans. An additional 423 seats can be allocated in the East Stand if required.

Irish-midfielder John-Joe joined the Cobblers in 2014 after leaving Bristol Rovers. He has gone on to play over 140 matches for Northampton, chipping in with 30 goals.

A crowd favourite, John-Joe netted six times during the 2017/18 season. 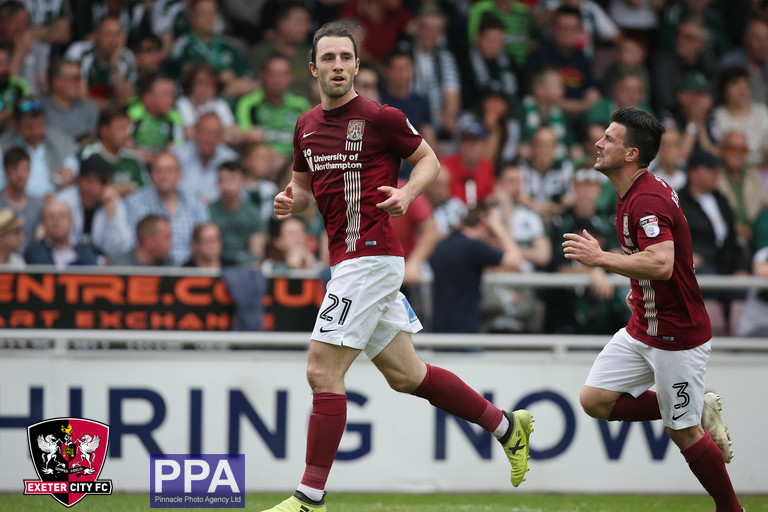 The 2017/18 season was one to forget for the Cobblers as they were relegated back to League Two after two seasons in League One.

Northampton climbed as high as 18th in January but by early April had slipped back down to 22nd after a winless nine-game run.

Dean Austin took over as caretaker boss for the final few weeks of the season, but could not steer the club to safety as they were relegated on the final day of the season after drawing 2-2 with Oldham, needing a nine-goal swing for safety.

Northampton Town were crowned champions of League Two at St James Park despite being held to a goalless draw. Jayden Stockley hit the bar twice but City couldn't find a way past the Cobblers defence.

City suffered their first loss of the season, as Northampton Town took all 3 points with a convincing 3-0 win at the Sixfields thanks to goals from Jason Taylor, Ryan Cresswell and Marc Richards.

Fixture release day is on Thursday, June 21, tune in from 9am to find out when City will face the Cobblers in 2018/19.