When the Old Grandstand was demolished at the end of last season a number of items – including all of the seats – were put up for sale.

Exeter City supporters travel near and far to support their team and it seems now do our seats as three of them have gone all the way to Adelaide, Australia – a distance of 10,274.296 miles as the crow flies.

Adam Black, who is a long-standing supporter of the club having worked for a year at a hospital in Exeter, is the fan responsible. He has since managed to see a few games when he has been over here but has mainly followed the Grecians from his home in Australia.

When he read about the sale of the Old Grandstand memorabilia, a crazy idea took hold. Would it be possible to purchase a small number of seats and then install them in his garden? Why not, so a bid was made and the mechanics could surely not be too complicated to work out at a later date. 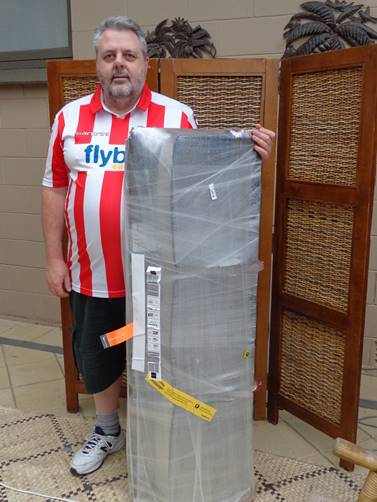 Adam with his seats at the airport

Adam’s bid was successful and the first stage of transport was arranged. Neil Le Milliere would bring them back to London with him in his car after a Trust meeting in Exeter and store them in his garage ready for the next stage.

Having enquired about transporting them to Australia by freight and being quoted a quite ridiculous price of around £700 he decided to wait for a better option.

The next stage was when Adam came to Vienna for a conference and a plan was hatched. Surely taking them as excess baggage couldn’t be anywhere near as expensive and so it proved. Adam flew into Heathrow on the morning of Sunday, May 13, and then got the Heathrow Express into Paddington. Meanwhile, Neil and fellow London Grecian Jim Shepherd set off with the seats.

On arrival at Paddington a few FECRACE ales were imbibed and then Adam set off back to Heathrow.

Of course, there was the small matter of how they could be easily handled and stowed on the plane but then they finally worked out what those plastic wrapping machines at airports are for!

So the final journey began, a Sunday evening flight from Heathrow to Melbourne then an onward flight to Adelaide arriving Tuesday morning and finally the seats arrive at their new home.

So are these must be the furthest any of the Old Grandstand seats that have travelled? Unless you know different? If you do please get in contact with us.