Exeter City midfielder Nicky Law is expecting nothing less than a difficult encounter when the Grecians welcome Macclesfield Town to St James Park on Tuesday night.

The away side will travel to Devon following a victory over Yeovil Town last week and will be looking to build some momentum to climb away from the relegation places.

Nicky is expecting a tough test and says he and his teammates will have to be on their game if they wish to return to winning ways.

The midfielder said: “From our point of view I think it will be what we always do, concentrate on ourselves, and respect our opponents whether they’re first in the league or bottom of the table.

“There are no easy games in this league, and I think the worst thing we could do is to turn up thinking that we only need to turn up and we’ll win the game because it won’t be the case, it’ll be another tough game, but we’re at home and looking to do our own thing and do what we do well and hopefully get our first three points for a while.”

City come into the game after picking up a respectable point on the road against Colchester United last weekend. Matt Taylor’s side turned out a resilient display and got back into the match through Jayden Stockley’s second half equaliser shortly after falling behind to Sammie Szmodics’ effort.

On the draw, Nicky said: “We were pleased with the point on Saturday. Before the game we knew it was going to be a difficult game, of course we went for all three, but we knew if we’d have got a point then it would have been a decent result.

“They were a good side, and particularly in the first half, had quite a few chances and a lot of the ball, the way they play was difficult to play against. We hung in there and when they scored you knew from there it was going to be quite difficult, but our reaction was good, and I think previously the manager has been disappointed with our reactions to losing goals, so we were pleased that we did react in a positive manner at the weekend and equalise straight away. After that we could have maybe nicked it. 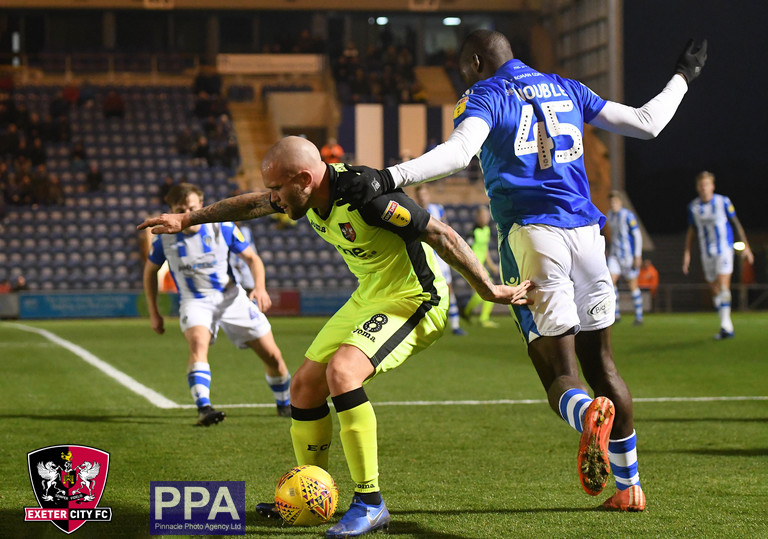 Nicky was also full of praise for goalkeeper Christy Pym who made a string of first half saves to keep the Grecians level as United looked to go ahead.

The midfielder continued: “Christy made some really good saves, particularly in the first half. His saves were vital because if they’d have scored early, I think I saw a stat before the game of how many goals they had scored at home in the first 30 minutes, and you could see that. That’s a thing that they target but Christy kept us in the game early on with two or three really top saves. That’s what Christy does, he’s one of the best in the league so we’re delighted to have him in there and we’re thankful for his saves in the first half.” 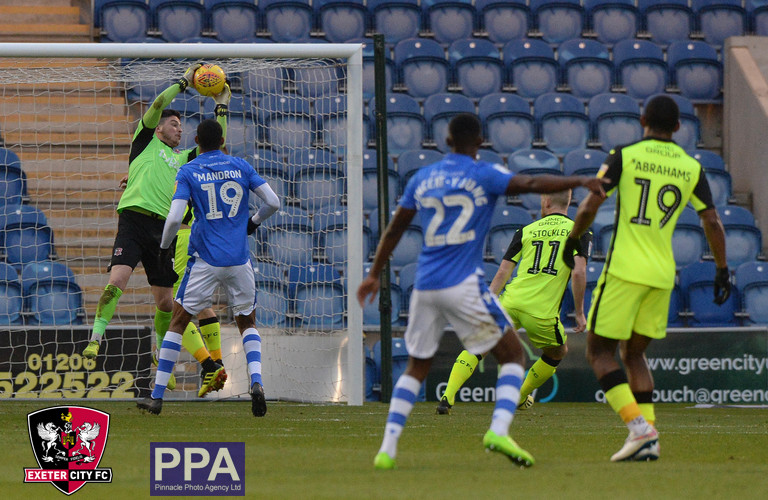 The match with Macclesfield precedes a rare weekend off for the Grecians due to no longer being in the FA Cup. Though disappointed to not still be in the competition, Nicky believes a short break could serve the Grecians well as they set their sights on a busy Christmas schedule in December and into the new year.

“It will be a rare chance for myself to get back home and see family,” explained Nicky. “We’ll have a couple of days off at the weekend, train for a couple of days after the game tomorrow and we’ll work hard and hopefully enjoy a bit of time with whatever we end up doing. A few of the boys will go home and see family so it’s always a nice to have a little break, hopefully we can then come back a little bit fresher to hit a busy December and January period.”

The midfielder also praised the City fans for their support this season, especially to the 264 supporters that braved the cold as they made the four-and-a-half-hour journey to Colchester last weekend.

He continued: “They’re brilliant at home, particularly in the Big Bank. From start to finish, whatever the result, they’re always behind us and won’t jump on our backs, they’re there for us the whole time. The fans that made the long journey at the weekend, of course we did it on the Friday, we know how tough those journeys are and their support means everything. I’m sure they will be behind us tomorrow and as players and staff we appreciate it.”

The game with Macclesfield Town will be City’s designated game in support of LGBT inclusivity to raise awareness of Stonewall’s Rainbow Laces campaign.

Team captains will wear rainbow armbands and the corner flags, and the substitution board will be turned rainbow coloured to show our support, and special programme adverts will also be in the matchday programme, The Grecian.

It is a campaign which has Nicky’s full support and is something that he is pleased to see grow in recent years.

On the campaign, Nicky said: “Obviously over the last few years it has become a bit bigger and all the players (in football) are getting behind it and we’re no different. I think a few people have been brave and strong and spoken out about their sexuality. Players are urging others to do it more and more, but it’s a huge decision for somebody to do. We will get the laces, and everyone here is very supportive of it. 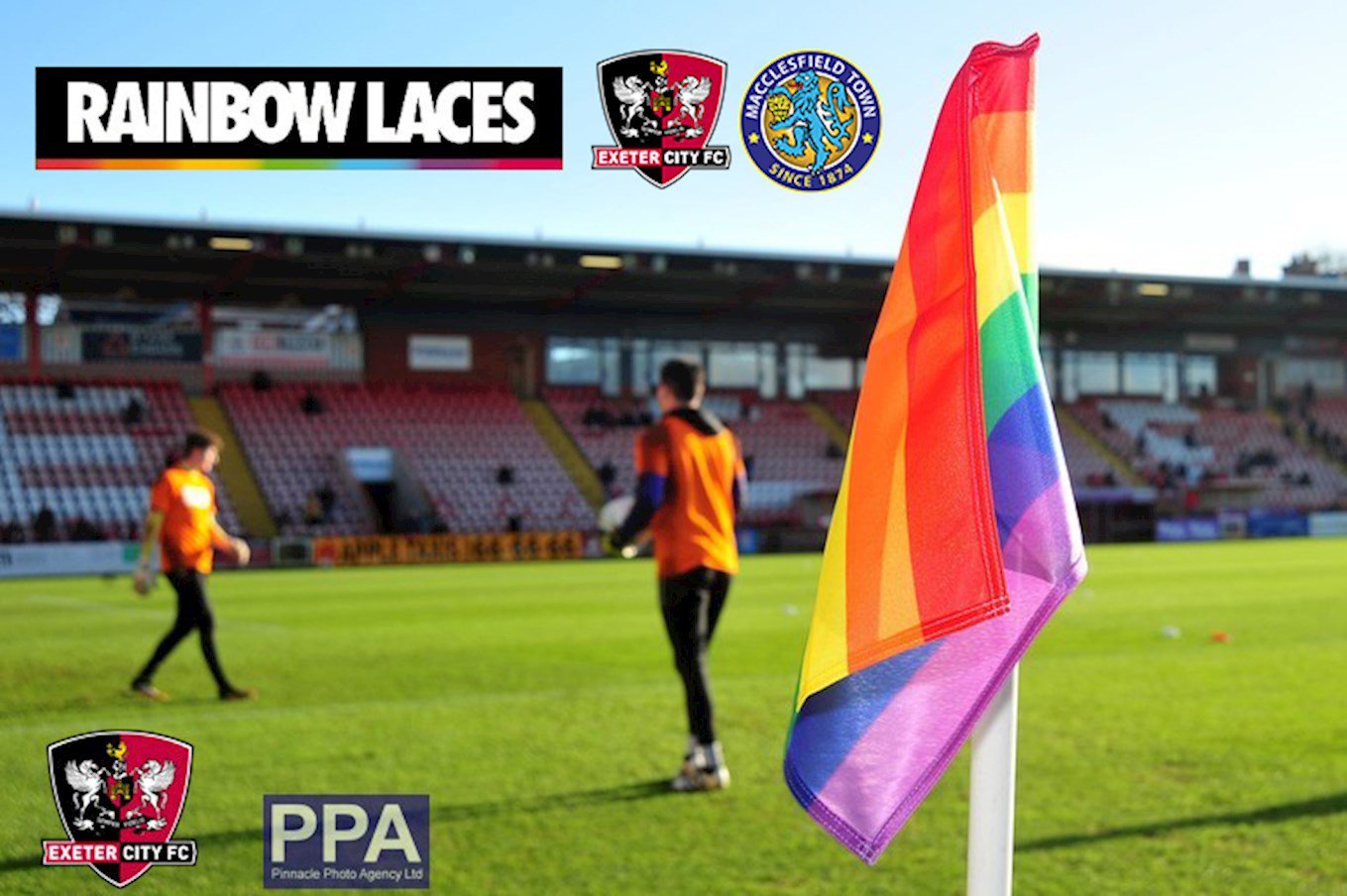 “I’ve never heard it, from a playing side of it, whether it’s been things shouted from the side lines, it’s difficult to know when you’re actually playing because you don’t tend to hear too much. It’s improved, a few people speaking out has certainly helped and I don’t think there will be negativity from the footballing world for anyone who wishes to do so in the future.”