Among the City squad it's fair to say that there are a fair number of experienced heads in the dressing room.

Players who have played at higher levels in pressure moments and players with the ability to ensure the Grecians are fighting towards the top of the table come May 2019.

The likes of Dean Moxey, Lee Martin and Nicky Law, amongst others, are players who have some pretty big names in English football on their cv's.

Also in that City squad they possess a striker with a wonderful track record for scoring goals, and a player who is motivated to succeed with the Grecians.

After coming through at now Premier League side Bournemouth, Jayden Stockley had to leave permanently following a host of loan spells to kickstart his career, and it's safe to say he's making his mark in the Football League.

Prior to the match with Blackpool, Jayden had helped himself to nine goals so far this season, as well as his 25 goals in the 2017/18 season.

It's clear he's a man who wants success this season, and after being part of a side that had begun the season in excellent form, he has also been privvy to a blip where the Grecians had fallen to defeat against Forest Green Rovers and Tranmere Rovers.

But despite that slight collective drop off in form, Jayden said his side won't be changing anything drastic in the near future and they will stick to their beliefs.

He said: “It’s been a bit tough with the last couple of results we had, but we went on a brilliant run and there’s no need to panic. It’s about getting back to the things that we do best and hopefully we can go on another run. We’ve spoken about it, and some of the away games recently could well have swung our way and we’ve been unfortunate with that. The last two (league) games we want to put right. 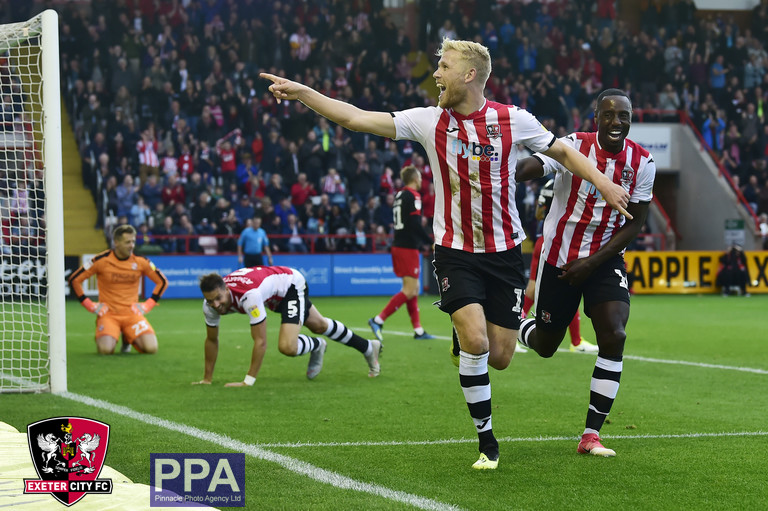 “It shows the difference between a good team and a very good team. We want to be a team that can bounce back from a couple of losses and go on a good run compared to a team that stays there and keeps picking up poor results, we’re not that team at all. We bounced back from the Lincoln City game and went on a really big run so that’s something we’re looking to do now.”

The two consecutive defeats also coincided with a number of injuries to the likes of Christy Pym, Troy Brown, Hiram Boateng and Lee Holmes, amongst others, but it has also given opportunities to players who may have been on the periphery of the starting line-up.

On the situation regarding the fitness of the squad, Jayden believes, though injuries have taken their toll in recent weeks, the side still have strength in depth.

He continued: “We’ve been unfortunate with injuries and illness and the travel as well. We’ve had to deal with that all the time. Matt’s put together a squad that is really competitive, even the young lads who have come in like Archie Collins, who came in and looked like he’s been playing all season, he did brilliant. 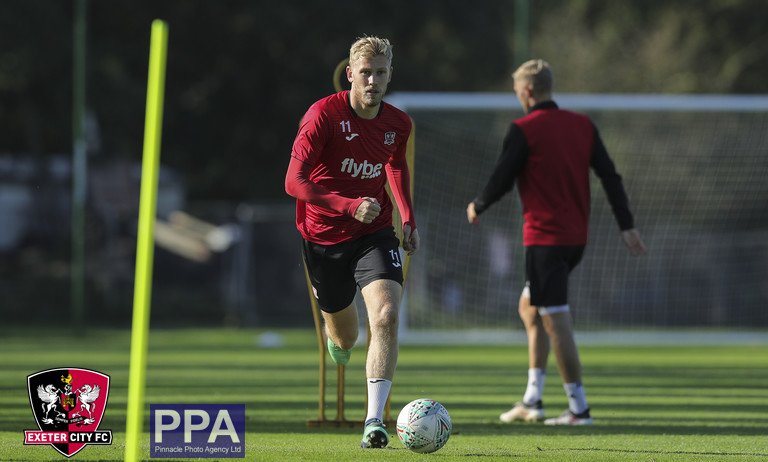 Jayden in training for the Grecians

“We’ve had people come in to play in different positions but they’re doing a job for the team, and I’m sure something will click again soon. We’re doing the same things because we know that we’re a good side.”

Including the clash with Blackpool, the Grecians have three consecutive first team fixtures in front of their home fans in a stadium that Jayden has been left impressed with considering the development.

“It’s nice to look around all parts of the ground and see fans because it creates a different atmosphere,” said Jayden. “It’s up to us players now to create an atmosphere with performances on the pitch, so the fans can feed off us. We have a responsibility to do that.

“The whole thing (the stand) looks incredible. Even the away stand is good and it’s such a nice feeling to have a modern stadium. But to name the home stand after Adam Stansfield is another brilliant touch and it adds to the whole sense of community here and pride that we have in our stadium now.”

With nine goals to his name so far this season (pre-Blackpool in the FA Cup), Jayden has taken well to life under Matt Taylor. In a new role as vice-captain he is continuing to mature as a striker who leads by example and has shown on more than one occasion this season that he has the ability to get on the scoresheet when it really matters. And one thing is for certain, if the Grecians are to finish the 2018/19 campaign successfully then you can bet that City’s super striker will have a say in the matter.