Exeter City have had some success with loan players in recent years.

Players from academies belonging to either Premier League or Championship clubs who are keen to break out of the comfort that youth football can bring and test themselves in the Football League.

Jack Stacey springs to mind, who etched himself into the history books for the Grecians in the 2016/17 season when he fired home an injury time winner to send City to Wembley. That same year saw Luke Croll gain valuable experience in League Two before he signed permanently for the club and has continued his development.

Last season we were graced with Kyle Edwards and Kane Wilson from West Bromwich Albion. Two exciting young prospects who enjoyed their time in Devon and learned a great deal as City got to Wembley for the second successive season.

This year the Grecians have a new crop of loanees looking to develop, learn and make an impact at St James Park.

Tristan Abrahams, joined by Chiedozie Ogbene and Dara O’Shea are youngsters who have impressed already in their short time with the club, and look like they could prove key members of Matt Taylor’s squad this season in the search for success.

Tristan, who came through the youth ranks at Leyton Orient, played nine times in League Two and scored twice before he was snapped up by Norwich City at the end of the 2016/17 season.

His development continued within the Canaries’ under-23 side, but the 19-year-old has arrived at City looking to test himself in regular men’s football for the 2018/19 campaign.

“I’m enjoying it. As the months go on, I’m playing more and more which is what I want to do and I’m loving every moment,” explained the London-born striker.

“It’s a great bunch of lads here, I probably have the best relationship with Luke Croll, Hiram (Boateng) and Jonno (Jonathan Forte.) There’s always a buzz around the place, everyone is always positive and knows what they’re here to do.

“I learn from Jayden (Stockley) in an attacking sense, the way he holds up the ball, which is an area I need to work on, so it’s good to be around someone like him. The likes of Deano (Dean Moxey) and Woody (Craig Woodman) have great experience in the game so they’re very professional, which is something I’m learning from too.

“I’m getting something from every session, there’s always someone for me to talk to, the likes of Greeno (Dan Green) always has his arms open to help me. I’m really enjoying playing under Matt. He understands my weaknesses, which is a good thing, it’s about making sure that I’m doing the basics well and my quality can take care of the rest.”

Tristan introduced himself to the City faithful on the first day of the season and it took him just 29 minutes to show what he could do after coming off the bench. As City broke away up field in stoppage time an exquisite pass from Jayden Stockley found the youngster, who took a touch, before firing home to make the score 3-1 and confirm the three points in Matt Taylor’s first match in charge of the club.

“There were a lot of nerves, and a lot of happiness,” said Tristan. “I remember getting the call to come on and I remember thinking: ‘Oh, wow! Here we go’ then I had a little pray. I came on and luckily Jayden found me then I can’t remember what happened after that! 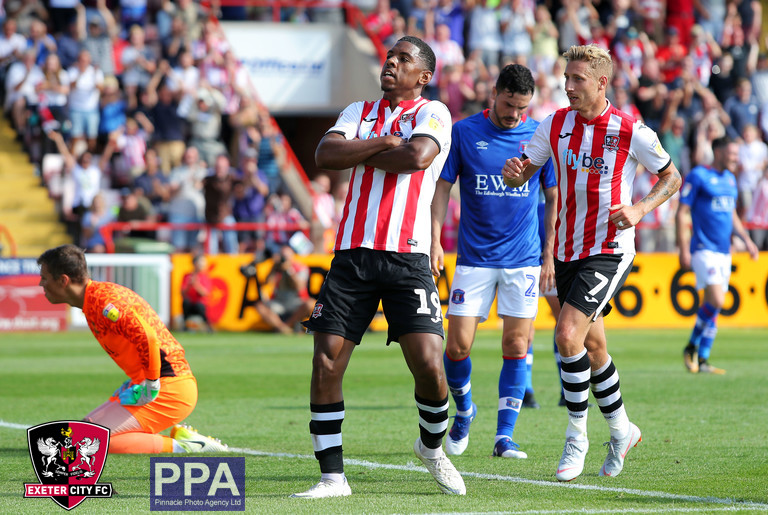 “I’m quite religious, I believe that all of my power comes through god, so if I talk to him then it instils more confidence in myself, and I believe through him then anything is possible.”

As with most young players form isn’t guaranteed, and neither is starting every week, and Tristan has had to work hard to keep pushing for minutes at St James Park, something the striker says he is relishing.

“I didn’t come here with an expectation to start every game, but I’m getting more and more minutes and I’m learning about how to hold the ball up, which is something I’m getting better at the more that I play. I’d like to add more goals to my game as I’m playing more now.”

Part of adapting to the Football League is dealing with the physical aspects of the game, and Tristan is experiencing that, none more so in recent weeks when he started against Northampton Town in what was a 2-2 draw. 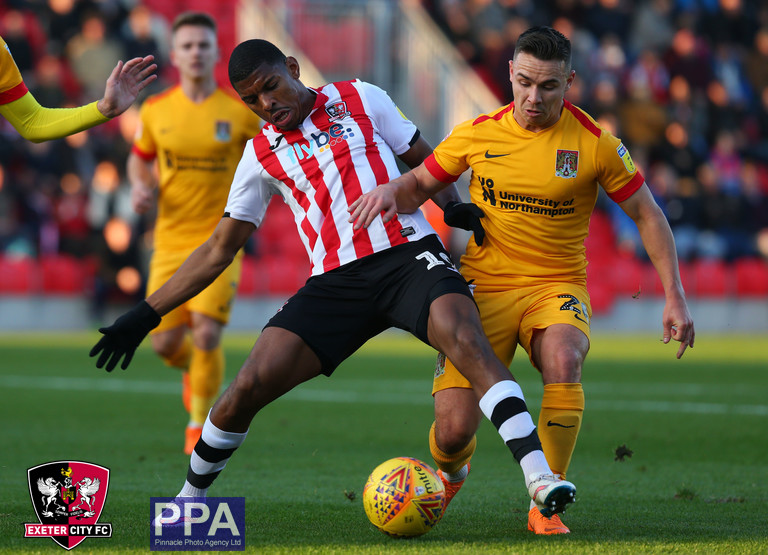 Tristan in action against Northampton Town

“I’m loving the physical side of the game because when you play in the under-23s it’s very tactical and there’s methods to everything. You’ve got to go more off your own ability in League Two.”

Tristan also believes he is benefiting from his loan deal in ways off the pitch. After moving to Devon away from friends and other influences outside of the game he believes he now has the best chance to focus on his game as he sets about forging himself a successful career.

“It’s very different from London but it’s nice. It’s very quiet but it will keep me focused and there aren’t many distractions down here. I’ve talked to older generations that I’ve had around me, and now I’m away from the partying and my friends, or any distractions really. I can go back home and sit down, watch my games, or sit and have a talk with Chio (Chiedozie Ogbene) about football. It’s very football full time and I’m enjoying it. I’m focused on the game and that’s all.” 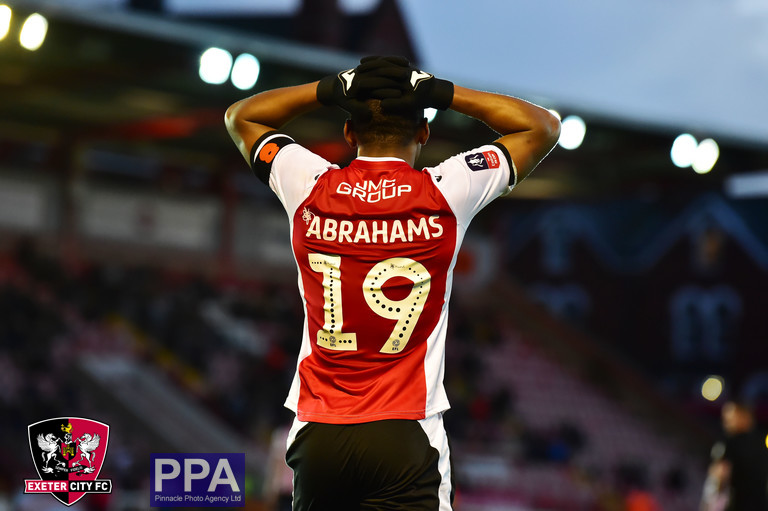 It’s clear that Tristan is taking his career seriously, as a young player it may be hard to keep your focus solely on football, but the striker says he owes a lot to his grounding at Leyton Orient, a club he will always keep an eye on.

“They gave me my chance, they allowed me to be who I am today, and I can only thank them for that. I enjoyed playing there, I was there from a very young age and to break through there is every young boy’s dream.”

So, it seems the Grecians have another loanee who has the ability to be added to the list of Jack, Kane and Kyle as a player who will always be remembered fondly at St James Park, and it’s clear that Tristan will be a player who is desperate to have a say on how the Grecians fare over the coming months.