Jayden Stockley’s instant reply to going 1-0 down at Colchester United on Saturday, ensured Exeter City claimed a point and maintained their place in the top seven.

The Grecians have drawn five of their last seven league games, and fine margins at the top mean they could still move into the top three when they host Macclesfield Town on Tuesday night.

Bottom-placed side Macclesfield picked up a much-needed win on Saturday, as they edged out Yeovil Town 1-0, though they are still seven points adrift of safety with plenty of work to do.

Here is everything you need to know about the Silkmen

Despite flirting with the Football League down the years, Macclesfield have primarily found themselves on the periphery, as their three Conference titles indicate.

The Silkmen have gained promotion to the third tier of English football on two occasions, but have found League Two a common playground tor the most part of their history.

One of their three Conference titles came last season, as the Cheshire-based side propelled up to League Two after a scintillating season that saw them claim 92 points and ten points clear of second-place Tranmere Rovers.

Macclesfield are in a stet of disarray following the sacking of Mark Yates last month. Danny Whitaker and Neil Howarth took duel responsibility of management proceedings since Yates’ dismissal, but now it is just the former that remains after Howarth also departed the club.

Whitaker - who came through the ranks at Manchester United – also plays in midfield, but the 38 year-old has also taken the managerial reigns, while the club look for a full-time successor to Yates.

Whitaker is something of a club legend having amassed nearly 400 appearances for the club, spanning two separate spells. It’s been a baptism of fire to management for the midfielder, but he can at least take solace in his first victory for the club on Saturday.

As one of the longest-serving stadiums in England’s professional league’s, Moss Rose not only holds historical importance for Macclesfield Town, but surprisingly, Exeter City also.

The Grecians won the first ever Football League match hosted at the ground in 1990, beating brief occupants Chester City 2-1 – who moved in for two seasons, as they awaited a move to new stadium, the Deva Stadium.

The Ghanaian-born Arthur might be diminutive at just 5’7, but he’s quickly growing in stature at the Moss Rose.

The 22 year-old came through the youth ranks of Birmingham City, before leaving St Andrews in 2017 and joining Macclesfield were he formed a part of the title-winning side.

In ten games this season, the winger has two goals to his name.

Macclesfield picked up a highly-sought victory on Saturday, following on from four successive league defeats that had the side firmly rooted to the bottom of the table.

In the midst of their league exertions, the Silkmen also suffered a humiliating FA Cup defeat at the hands of non-league Maidstone United, little over a fortnight ago.

A stuttering start to the league campaign meant Macclesfield accumulated just five points from five games after being routinely dismissed 3-0 by Gateshead.

While indifferent form followed their start to the season, the Silkmen went undefeated through November and December.

Come the end of December, Macclesfield were six points clear at the top of the table, though they soon came crashing down to Earth after being trashed 6-0 by AFC Fylde.

After setting the pace in the Conference for months, Macclesfield secured their well-deserved return to League Two with a 2-0 win at Eastleigh with two games to spare.

The win catapulted the Grecians back into the play-off zone with two goals in either half and completed a resounding 8-1 league double over the Silkmen.

A double from Adam Stansfield and a goal apiece from Ryan Harley and Matt Gil stunned an in-form Macclesfield side that had won their last three on the trot.

Tickets are on sale at advance prices until 5pm on Monday, November 26. Why not save money and time queuing by buying in advance? 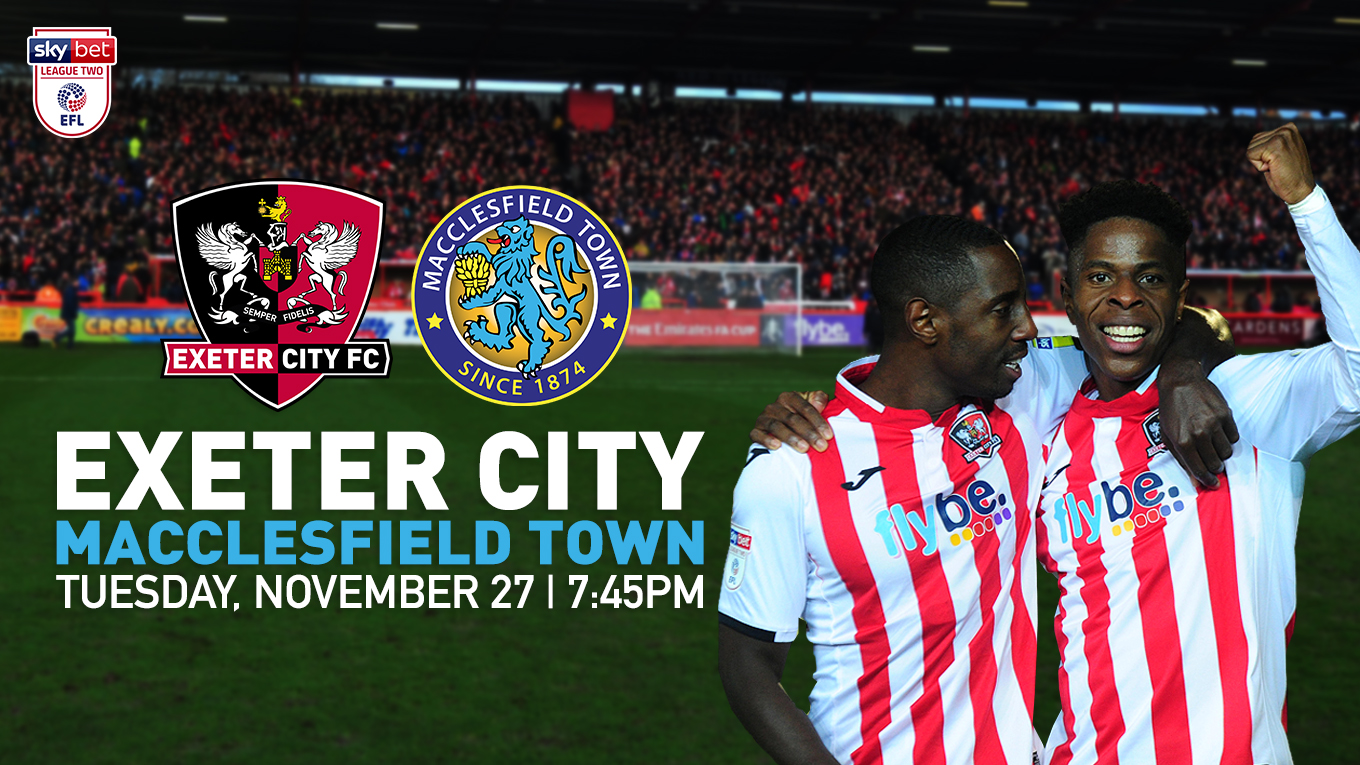