Having watched their side dismantle league rivals Keynsham Town Development in a second qualifying round tie of the SSE Women's FA Cup, management duo Abbie Britton and Clive Watts are asked what the aim is for the Exeter City Ladies this season.

The response is short and to the point…promotion.

It is a significant increase in aspiration from the last campaign, when in the midst of a rebuilding job, City finished fourth in the South West Women’s Football League Premier Division – 27 points behind league leaders Buckland Athletic.

However, this is a self-assured side; confident in the knowledge that a hard pre-season, coupled with an influx of younger players, have set them up for what could be a very good campaign.

That new-found belief was evident in the FA Cup tie, as hat-tricks for Sophie Gillies and Sian Chapman, along with a double for player-manager Abbie, saw the Grecians run their opponents ragged for almost the entirety of the match as they racked up an 8-1 scoreline.

“I think it just shows how far we have come,” smiled Clive, who knows that Keynsham are one of the stronger teams in their league having won their opening two matches and beaten City 3-0 in May. 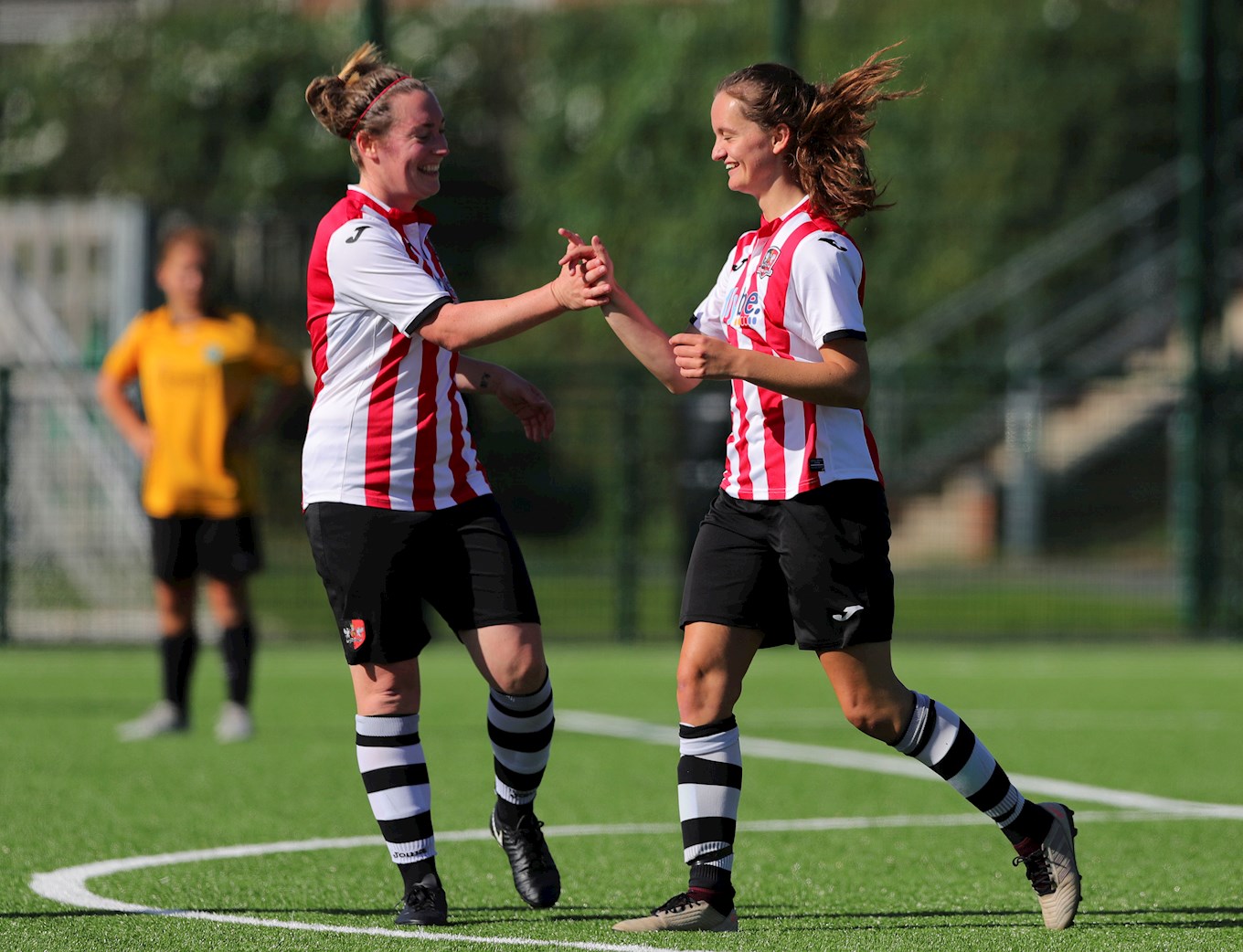 “There is a real difference in confidence levels and the way our players are adopting the style of football we want to play,” he added.

“The way they have bought into the system is remarkable and you can just tell they are loving it. They are enjoying their football, they are confident and they are willing to learn. It is a manager’s dream.”

That perfect scenario has been aided by the arrival of players, who have graduated from the girls’ development centre into the first-team squad.

The centre, which was set up 18 months ago, gives young girls the chance to get more football training, whilst still playing for their grassroots club, and learn the style and patterns of play which will be adopted by them should they move into Exeter City Ladies first team.

Against Keynsham Town, there were five players – Sophie Gillies, Georgie Barbour-Gresham, Carmen Morrison, Erin Romanowski and Ella Mae Miller – who played their part in the victory having only stepped up from the development centre in the summer and a sixth – Hanna Bennett – who has also recently taken a similar pathway into first team. 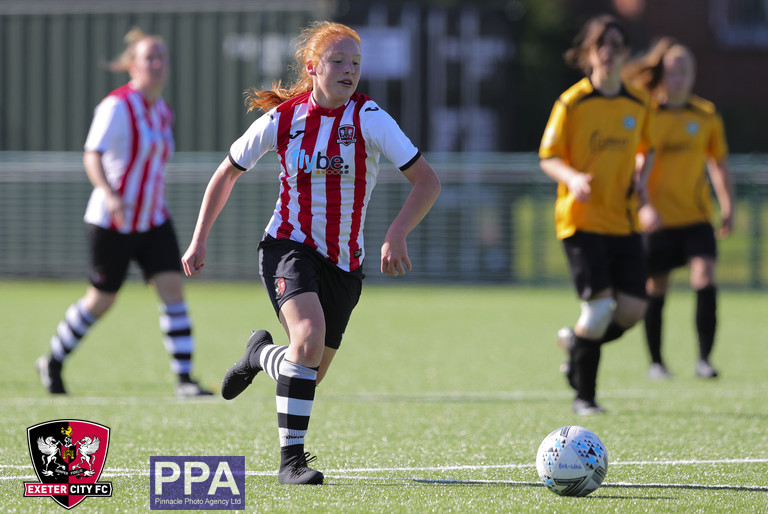 Carmen Morrison on the ball for Exeter City against Keynsham Town

Blooding that many youngsters into the side is not without its problems, and both Abbie and Clive have made sure that there are plenty of experienced players in the starting XI to help the new recruits adjust to what is a difficult and competitive division.

However, with Sophie clinical in front of goal against Keynsham and Ella Mae and Carmen playing a pivotal role in setting up two of the eight goals, it is clear the young players are excelling in their new surroundings.

“You wouldn’t know from the first five games who are the experienced players and who are the young ones,” said Clive.

“There is very little difference. The youngsters have just come in and slotted in well.”

Despite the contrast from this season to last, the 2017/18 campaign was, of course, by no means a failure. City almost folded in the summer of 2016 and having been relegated from the league above, Abbie and Clive came in as joint coaches and set about implementing a style of play that would get the club moving in the right direction again.

The team won 11 of their 22 matches last season and those sturdy foundations have helped the ladies team in moving forward this term. 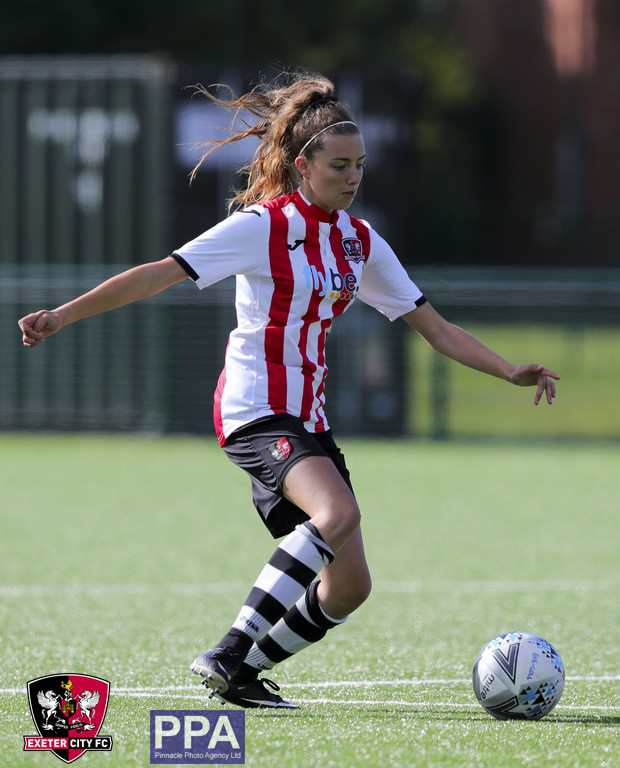 Erin Romanowski on the ball against Keynsham

“Last season we tried to build a stamp on how we played,” explained Abbie. “We didn’t mind losing last year as long as we played the right way and this pre-season we based things heavily around fitness.

“I would like to think we are one of the fittest teams in the league, if not the fittest, and that helps when you play the way we want to play. That has put us in good stead.

“We tried to play this way last season and it worked, but we needed to be fitter. So we worked on that, and now we have won six games on the bounce and we are scoring goals. Unfortunately, we have not managed to keep a clean sheet, but we will get there.”

The youngsters have also been helped by the senior players, with the backbone of the City team very strong.

“We have got experience throughout the spine of the side,” said Clive. “You have got Sian (Chapman) at the top end, Abbie (Britton) in midfield and Jazz (Hervin) at the back and that just helps in certain areas to pass that information on quick.

“We have never got a whole group of youngsters isolated in one area of the pitch. There is always that experience and advice that can be passed on to them quickly.”

“A lot of these players have played in this league before,” added Abbie. “It is a tough league. It is not the ‘big boys’ league that we want to be in, but it is a tough league to compete at because you have got players that have almost made it, and dropped down the leagues, and then some players who are good enough but just don’t want to commit. 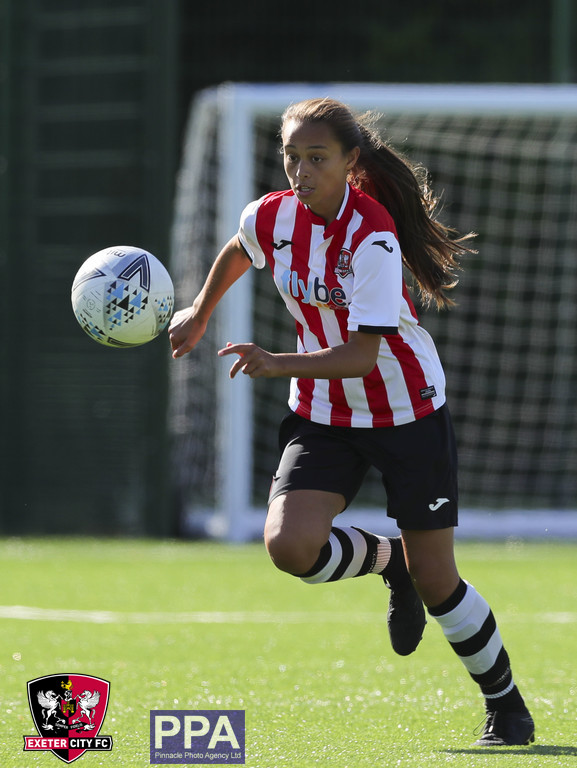 “So that experience that we have is only going to help the youngsters for when we do eventually get promoted and when we do play bigger and better teams.”

One of those bigger and better teams lurks just around the corner as, having got to the third qualifying round of the FA Cup, the Grecians now face National League side Cheltenham Town on Sunday, and they have won four of their first five games in the division above City.

However, it is clear from pre-season, that the ladies team are not scared of a challenge. Having taken inspiration from the first team, following a few chats with manager Matt Taylor, Abbie set the players daunting obstacles to overcome in the summer and the team responded with an enthusiasm and desire that warmed the hearts of the coaching team.

“I was lucky enough in pre-season that, when I arrived a bit early to training, I would bump into Matt (Taylor) and he would just explain to me what the men had done and I would just pick up ideas of that,” explained Abbie.

“I was not expecting the ladies to hit anywhere near what the men did, because the men train every day. However, it just added that bit of professionalism to our pre-season.

“If the guys can do it, why can’t the ladies? I just told our players to try their best and some girls really did push themselves. We had players throwing up after some of those training sessions. So they really, really did embrace it and it makes you proud now because you see can see their efforts are paying off.

“We trained twice a week. Once at the gym on a Tuesday, where we were put through our paces by a personal trainer, and the second session was then out at the Cliff Hill training ground, and I would try and mimic what the men’s first team were doing.

“We tested all the players at the end of pre-season and every single player got a lap or more. It really worked. The girls really bought into what we were doing and we had a nutritionist talks as well.

“Every bit that we can do, that we think will help just push us that bit further, we are going to utilize and it really helps when the club is backing us as well.” 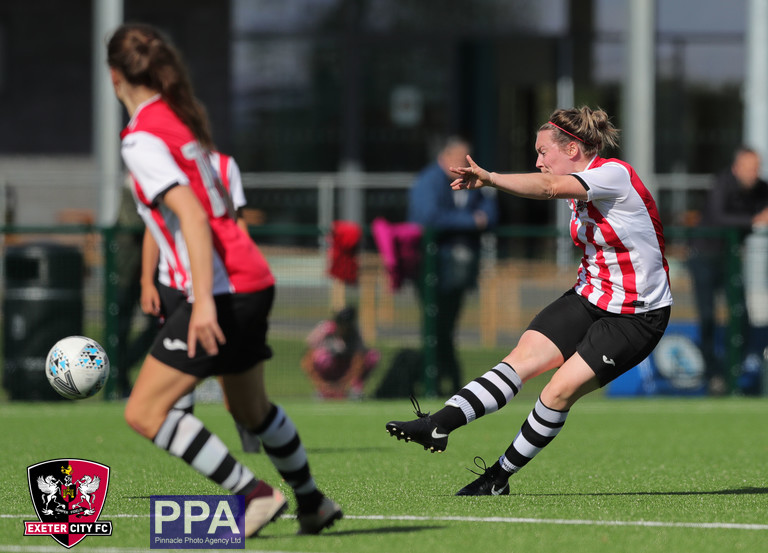 Abbie Britton fires a shot in from range against Keynsham Town

The team is also pleased with the backing they are getting from supporters and it is hoped, like the men, the players can become role models for those that turn up to watch them play.

“Absolutely, we would love more supporters to come along,” said Clive.

“There was a couple of Tweets we got last week from parents who brought their six-year-old girls to the game and they loved it.

“They said that they will be coming back because their girls loved the experience and loved how close they could get to the players. They feel a part of it and they want to come and be mascots.”

“And why not? The men do it,” added Abbie. “They have thousands of people watching them and have young mascots for their games and the girls are no different to them.

“They want to play at the highest level they can and we want things to be the same as the men’s team for that reason.

“So why not have a mascot at our game and give a six-year-old something to aspire to?

“The girls’ development centres are there now, the Wildcats sessions that CITY Community Trust run are aimed at five-year-olds.

“So any girl that wants to play football can play football at Exeter City and they can get on that pathway and who knows, we might have them turning out for the ladies’ team as the future star.

“That is the plan. It is all building. We are moving in the right direction and we would urge supporters, if you are free on a Sunday, to come and watch us play. It is only £1 to get in and it is a £1 well spent in my eyes.”

Exeter City face Cheltenham Town away this Sunday, before they return to league action at home to Downend Flyers at Cullompton FC on Sunday, October 14, at 2pm. You can find a list of all the ladies fixtures here and follow them on Twitter @ExeterCityLFC.