The Grecians will be looking to make it a dozen unbeaten as they host Forest Green Rovers on Saturday afternoon.

The Grecians have won their past four games at home in the league, while Forest Green arrive at St James Park following some indifferent form. However, the top of the table clash does pit third against six with Forest Green arriving off the back of a 3-1 win against fellow promotion hopefuls Tranmere Rovers.

Here’s everything you need to know about the weekend’s opponents:

Much like Crawley Town – Exeter City’s opponents on Tuesday night – Forest Green can pride themselves predominantly on their recent history, which continues to push boundaries for the club.

The 2016/17 season proved to be a pioneering first for the Rovers, as they were promoted to the Football League after beating Tranmere 3-1 in the National League play-off.

They followed up that promotion by retaining their League Two status when they finished 21st last season and this year they have proved they are capable of more as they keep up their push for promotion.

It is their efforts away from the pitch that are most notable though. Forest Green are the only ‘completely vegan’ club in world football and they continue to impress with their efforts on sustainability and the environment.

Something of a Football League veteran, Mark Cooper has worked his way around the leagues with managerial stints at the likes of Peterborough, Swindon and Notts County.

The diminutive midfielder became the boss at The New Lawn at the end of the 2016/17 season and salvaged their Football League status last year. The 49 year-old also made over forty appearances for Forest Green in his playing days.

The New Lawn stadium opened in 2006, replacing the aptly named The Lawn Ground which served Forest Green as tenants since 1890.

The New Lawn keeps in theme with the eco-friendly, sustainable concept implemented by chairman Dale Vince. A total of 25% of the stadium is powered by solar panels, while November 2014 hosted the first ever vegan match between Forest Green and Lincoln.

The highly-talented Forest Green stopper, joined from West Brom in the summer after making 15 appearances in Premier League 2 with seven clean sheers to his name.

He has made 12 appearances this season, having been on the losing side just once.

Forest Green’s form has been indifferent of late after going three games without victory, before Tuesday night’s 3-1 win against Tranmere.

That win lifted the Rovers into the play-off places, into 6th and above Tranmere on goal difference. The win proved a welcome relief for a side who have drawn their past two home games in the league.

Remarkably, they have only suffered one league defeat this season in fifteen games – a joint record with MK Dons. 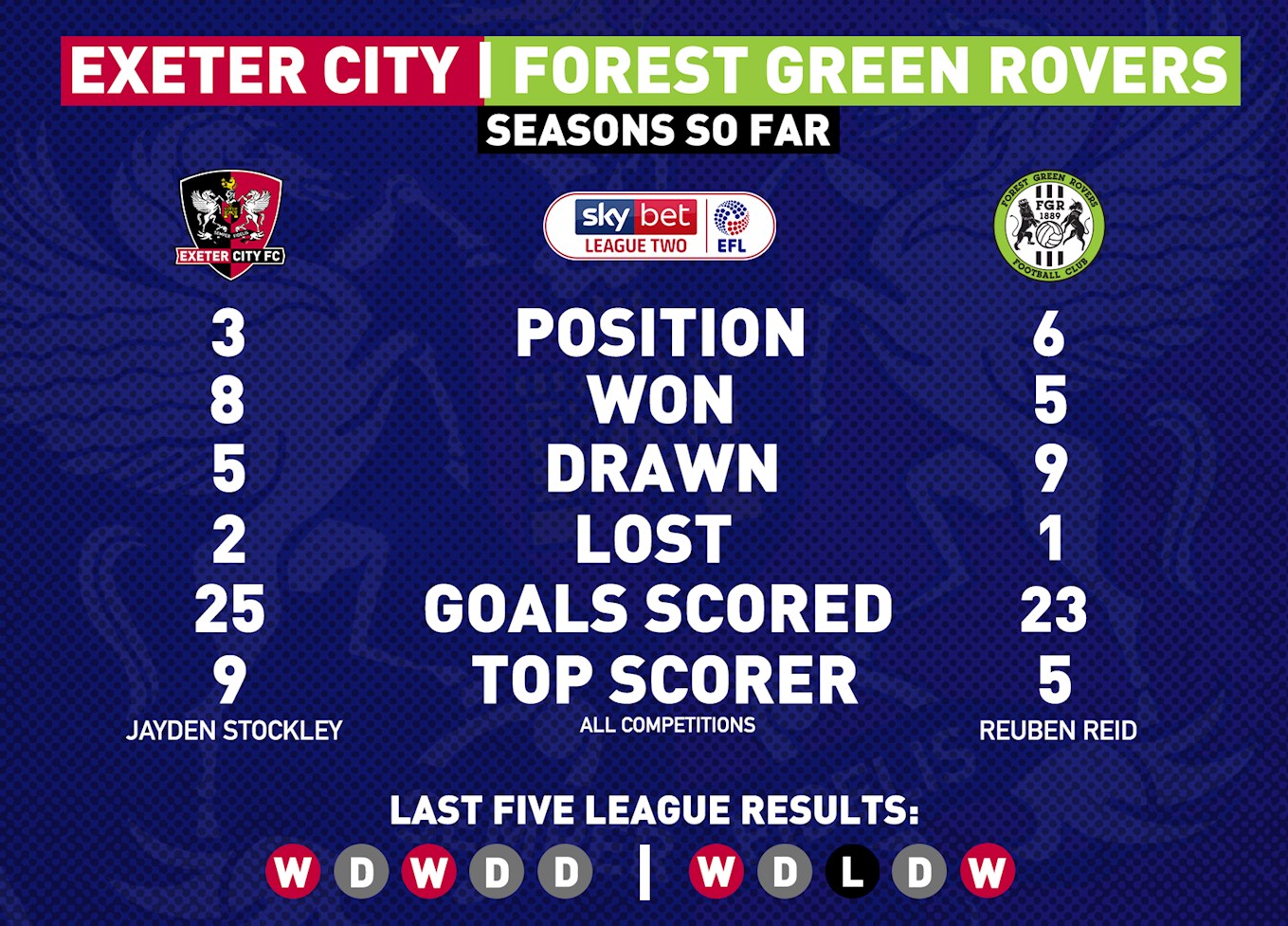 Come the New Year and Forest Green were staring down the bottom of the barrel, languishing in 23rd after suffering a demoralising fifth consecutive league defeat.

Fast forward just a month and the Rovers had propped themselves up to 19th and six points clear of the drop zone. Then a 0-0 draw at Yeovil Town with two league games remaining was enough to ensure an historic landmark for Cooper’s side as they retained their Football League status.

Going in goalless at the interval, Exeter came out in the second half with a point to prove as goals from Jayden Stockley and Pierce Sweeney’s penalty ensured the home side all three points.

Forest Green 1-3 Exeter City (09/09/17 - League Two)
Forest Green’s Football League baptism of fire continued as Exeter continued to set the pace at the top of the league. That was in stark contrast to the home side who stayed 22nd.

The League Two strugglers got off to a terrible start by conceding twice in the first twenty minutes, as Exeter took a comfortable 2-0 lead going into the break. Reuben Reid then added a third and his second, before Shamir Mullings provided a mere consolation.

Tickets are on sale at advance prices for Saturday's match until end of play on Friday, October 26. The seats in the new Stagecoach Adam Stansfield Stand have sold out, but there are a scattering availalbe in the IP Office Main Stand.

Book now to save time and money! Click here to find out more. 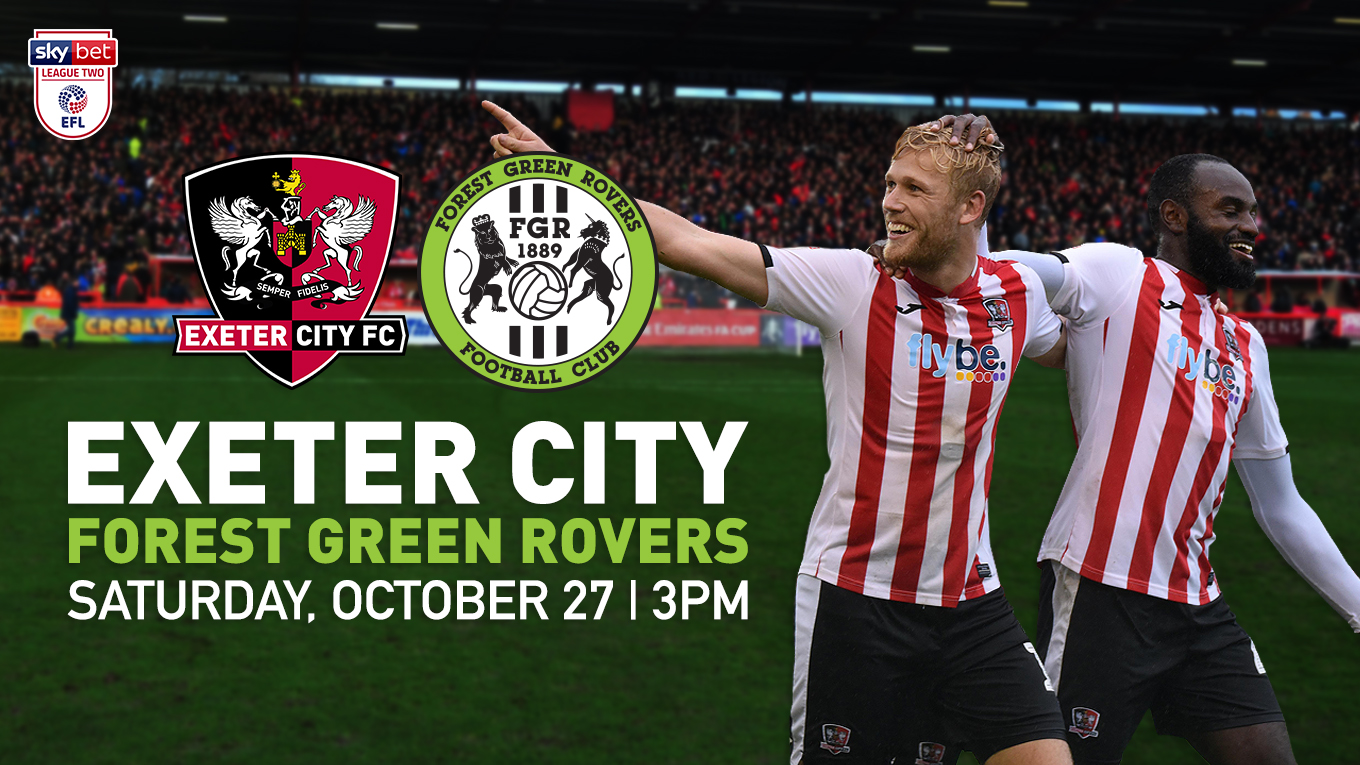