Brilliant and well worthy of the Exeter City goal of the season award, Hiram Boateng's recent strike against Port Vale made people stand up and take notice that Exeter City have the talent in their squad to compete at a higher level.

However, talent won’t get you there alone and in the aftermath of that goal, as Lee Holmes ended up somewhere in the middle of a pile of players on top of the goal scorer, he sensed another crucial ingredient that the Grecians need in their promotion push. It is something that smelt like team spirit.

“I think through this season, there have been celebrations that have happened where you can see what a tight-knit group we are,” said Lee. “Matt Jay’s goal at Crewe Alexandra was one of them. It was his first goal this season and you could see that everyone was buzzing for him.

“It was because we are so close on the training pitch that you are just happy for everyone to do well and get their moment to be a part of something special.

“H’s goal was the same, especially when you have been out for a long period of time – which obviously I know about. It is always nice to get back on the pitch and feel like you are doing well and playing to the level you know you can play.

Lee Holmes first joined City in March 2015, initially on loan from Preston North End before signing permanently in that summer, and it is a completely different club to any he has been at before.

However, that team spirit and togetherness has remained a constant and, despite the club missing out on promotion to League One on two occasions through the agony of a play-off final defeat, it has helped them regroup from those losses.

Players have also come and gone as well. In fact, only Craig Woodman, Christy Pym, James Hamon and Matt Jay remain from the original first team squad Lee joined four years ago. So why is the team spirit and togetherness at Exeter City always so strong? 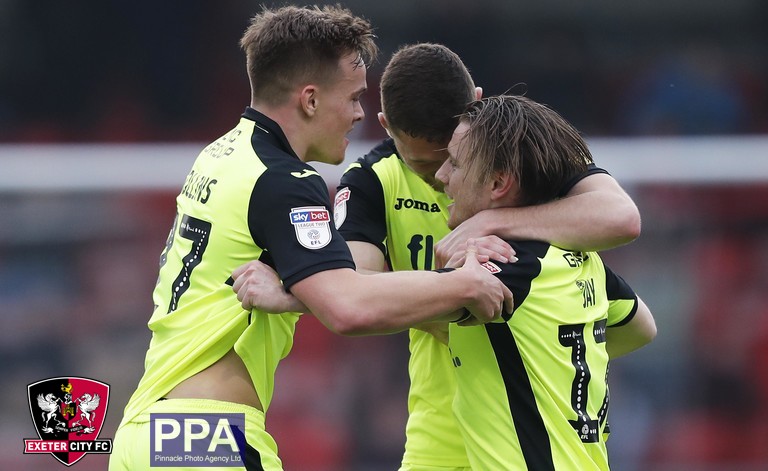 “It has never changed really,” said Lee. “We have always been a close-knit group. Whoever has come in has always fitted in really well with the group and I think we all know what each other needs to do.

“I think people let people know in training sometimes when things are not right, but we are a strong group and nobody takes anything personally. I think, because of that we have been able to have that consistency for the last three years and whoever comes to join the group they know what they are joining and it is easy for them to settle in.”

Lee adds that consistent characters, that have been here since he joined, and others such as captain Jake Taylor, have helped but the tone of the dressing room is set by the nature of the club not by the players inside it.

“This club is a unique club, which we all know,” said Lee. “And once you know that is the case everyone else gets to grips with that. You are able to show new players what it is like and the great points of the club.

“So the more experienced players who are here, who know and love how the club is run, the better it is because you can speak to the new players coming in and their transition to becoming the player they want to be while they are here is easier for them.” 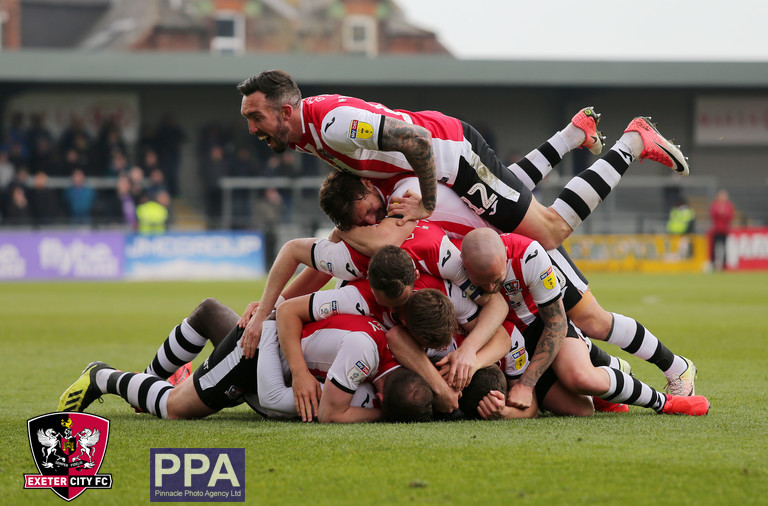 And it is not only in the dressing room that you will find that humble, close-knit, hard-working approach. City, as a supporter-owned club, arguably, has that ethos stretching far beyond the corridors below the IP Office Stand to a wider family incorporates an army of volunteers on the terraces who give their time and effort to push the club forward.

Exeter City Supporters’ Trust chairman Nick Hawker estimated that the effort, from the volunteers, amounted to more than £250,000 this season and is before you take into account the money the Trust members put forward as part of their annual fees.

“It is very endearing and that quickly rubs off on people,” said Lee, who only this year was given an eye-opening experience to just how big the Exeter City family is.

Following a 3-1 victory over MK Dons at St James Park, his daughter Lila was taken ill with pneumonia and was left fighting for her life at the Bramble Ward on Royal Exeter and Devon Hospital.

Thankfully she made a full recovery and when her brother Freddie asked to do a bucket collection at a match at St James Park to raise money for the doctors and nurses who helped her sister recover they raise £13,090. Lee received letters from City fans across Europe offering donations and their best wishes. 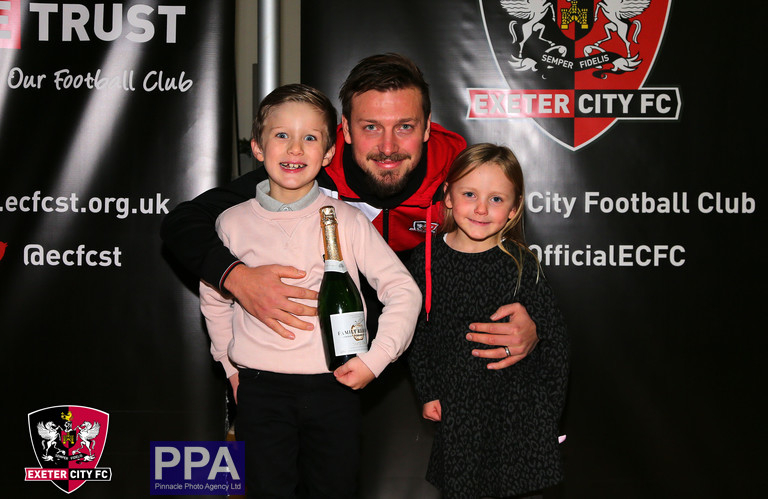 “The support I got was unbelievable,” said Lee. “Matt (Taylor), I have thanked him numerous times, but I can’t thank him enough for his empathy in the situation that we were going through as a family and he made things much easier for us to deal with.

“The lads, likewise, and I stretch that out to the fans as well because I can remember when the kids were doing the bucket collection for the Bramble Ward that numerous fans came up to me and one said: “I hope this shows to you that your family, is bigger than your family.”

“What he was trying to say was that it is not just your relations, your family stretches further than that and it stretches to the fans. I think that was a really nice thing that he was able to say, because I did feel that.

“I felt all the support that people were saying to me on social media, to me personally and to the family and that is why I say that this club is a special club because it is for moments like that.”

That togetherness on and off the pitch can take a team a long way and Lee is hoping that support can push them over the line this season and give his extended family the rewards their efforts have deserved during his time here.

“You can never say it enough,” he said. “I have spoken numerous times over the last three or four years about how amazing the ground is when it is bumping and the positivity that that brings. It will be no different (this Saturday) when the Big Bank is rocking and everyone is positive.

“It is a better atmosphere, it is a better game, the players thrive off it. And likewise when there is a bit of negativity, you can feel the nervous energy on the terraces and it naturally plays its part. So, I think, for us we have got to do our job and the fans they have got a part to play as well and the quicker that comes together in games the better really.”

“It would be massive if we could finally achieve promotion,” he added.  “We have been hunting for promotion since I have got here and obviously everyone knows that we have just fallen short a couple of times, which has been disappointing but each year there has always been a good reaction.

“It has been no different this year and we have been there or thereabouts and hopefully, with the situations we have been through in the previous years, it is going to stand us in good stead going forward.

“Obviously everyone would have loved to have been promoted automatically but in your career you can look back and there are not many opportunities where you really have a grasp of getting promoted.

“Getting promoted is probably the best thing that you can have in your career and to be given chances to do it is a privilege.

“So it doesn’t matter how those opportunities come about you have got to take it for what it is and to give your upmost because when you look back through your career and you look at wasted opportunities you don’t want to have too many of them.”