“It was November 25, 2017, against Accrington Stanley in the 14th minute,” says Troy Brown when asked to recall the challenge that led to an injury nightmare that would last for one year, three months and 26 days. “I can remember it like it was yesterday.”

To everyone else inside St James Park that afternoon it seemed like a rather innocuous and easily forgettable challenge, but the 6ft 1in defender knew different. 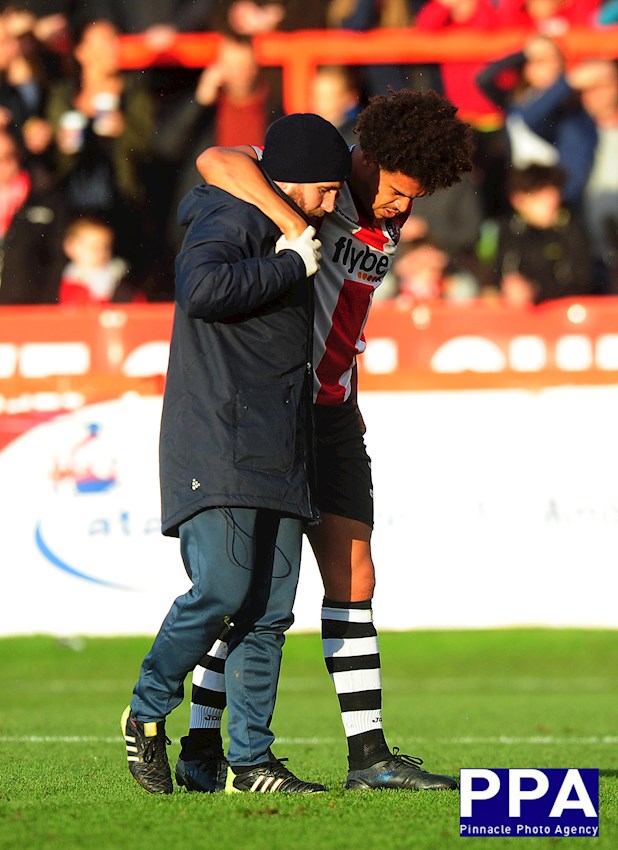 It had only been six months earlier that he had injured his right knee in the Sky Bet League Two play-off final against Blackpool – a ligament complaint that was made worse by the fact that he had to sit on the subs’ bench in physical and emotional pain as City, in his absence, crashed to a 2-1 defeat.

Now in November, laying on the St James Park turf, the torment had returned, because as he fell to the ground the opposition player’s boot had come crashing down on that same knee, leaving him rolling in agony.

“He certainly felt it,” said then manager Paul Tisdale after the match. “I’m not sure if it is the knee he hurt at Wembley in the play-off final, but it had similarities to that. We won’t know until we get it looked it at, but I’ll try to remain optimistic about it. Often you have to wait for 48 hours before you discover the extent of an injury.”

However, this wasn’t one of those often moment, and forty-eight hours would prove inconclusive. In fact, Troy, as he found out to his cost, would have to wait another year before the full extent of his injury had been revealed.

“From that day on, I was having a course of injections and rehab,” explained Troy. “I rehabed for 12 weeks, came back, played five games and broke down.

“I then had the carrot of last year’s play-off competition always there dangling, so I went down the rehab process again, got back into training again but it was far too late and the team were doing really well.

“I then came back into pre-season, got through that and then I said: ‘It feels a bit funny, something is not quite right’, and I went down an injection route once more and it was the magic number again, six. I got close to that sixth game and there was another breakdown.

“So, I went to see a specialist this time and it was an option of getting another course of injections – which had a 50/50 chance – or having an operation that would rule me out for a longer period of time.

“However, they said it would fix the problem and credit to the manager (Matt Taylor), he left the decision down to me. There was no pressure and I thank him for that and I haven’t looked back since.”

After two failed comebacks and the uncertainty that the course of injections and rehab had brought to his professional life, it was perhaps unsurprising that Troy then chose to take the longer, more assured route to recovery and he is glad he did.

“I am so thankful that I went down the operation route because the injury that I had was to a deep ligament which a scan will never pick up,” smiled Troy. “So that is the problem that I had. I was getting scans and it was showing micro tears and little tears to the superficial ligament, but it didn’t show the deep ligament.

“However, whilst I had been put to sleep, by the anesthetic, they opened me up when everything was relaxed and you could see what was going on and the ligament was in a bit of trouble. We have now rectified that though and I have had no issues whatsoever.” 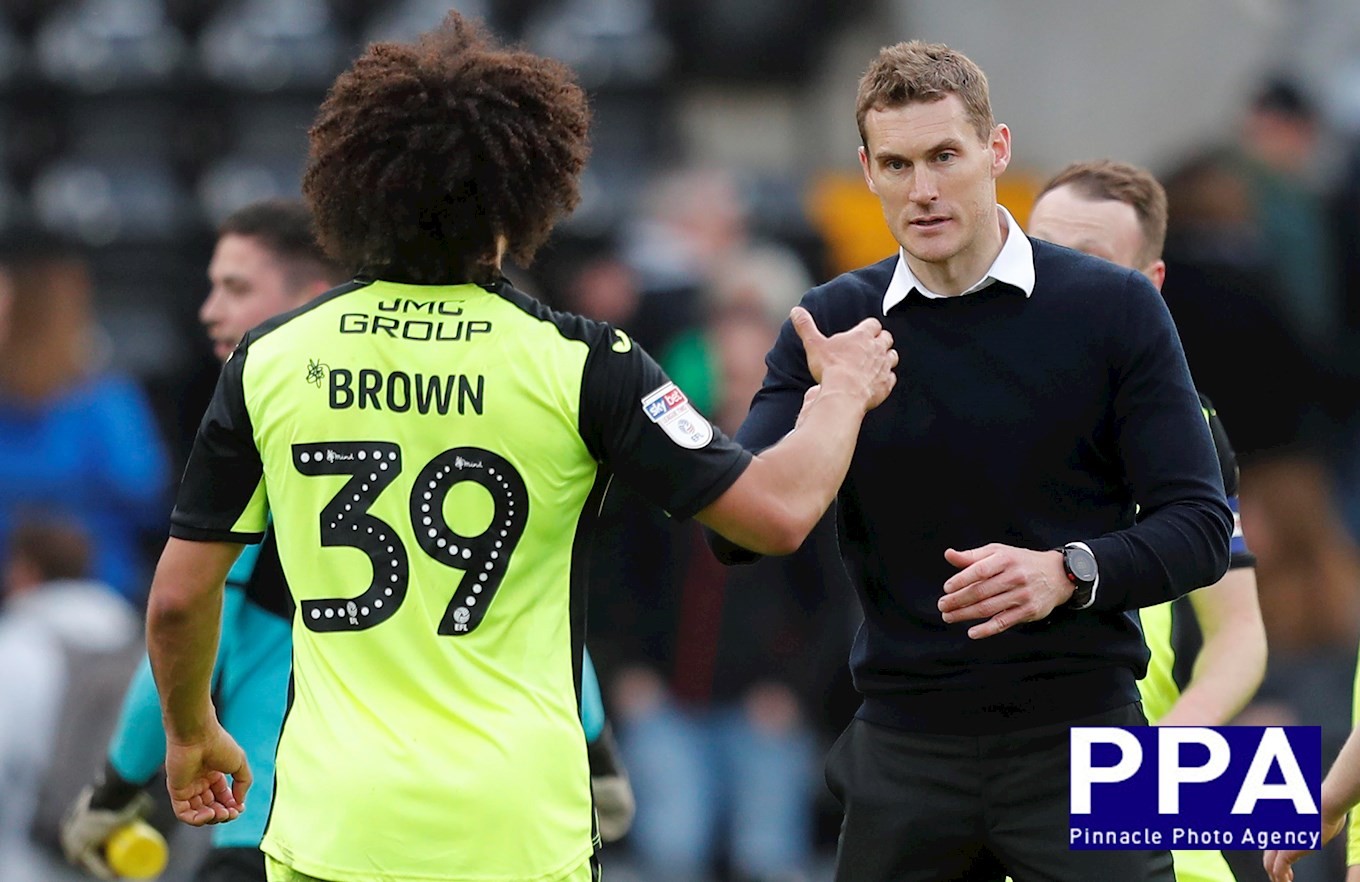 That was, perhaps, highlighted last Saturday when, making his first start since September 1, Troy completed a full 90 minutes of solid defensive work in a 1-0 win over Notts County at Meadow Lane, despite the medical and coaching staff only originally planning for him to play 60.

The next day he felt tired and exhausted as any player, who had spent the previous six months on the sidelines would, but on Monday morning he was back and raring to go for another full day’s training.

“I didn’t even know that was the plan to play 60 minutes,” said Troy. “I went into the game thinking it was going to be 90 minutes, so to get through that and get the points was brilliant.”

“I have had three weeks training with the team, which I have tried to push myself through,” added Troy. “And I played 65 minutes against Luton Town in a reserve match on March 19.

“So I am just building, building and building and hopefully I can contribute to the fantastic work the team has done whilst I have been out.”

That fantastic work, which has kept City in the play-off places and in touching distance of the automatic promotion spots, has been in part down to an excellent defensive record in 2019 that has seen the Grecians concede just nine goals in 13 matches.

Troy says, while the defensive line must take some credit for that, it is a team effort.

“We have had good defensive records before and I have always said it is defending as team, collectively from the front,” he said. “I think the manager has put a lot of thought and attention to that and we have done it well.” 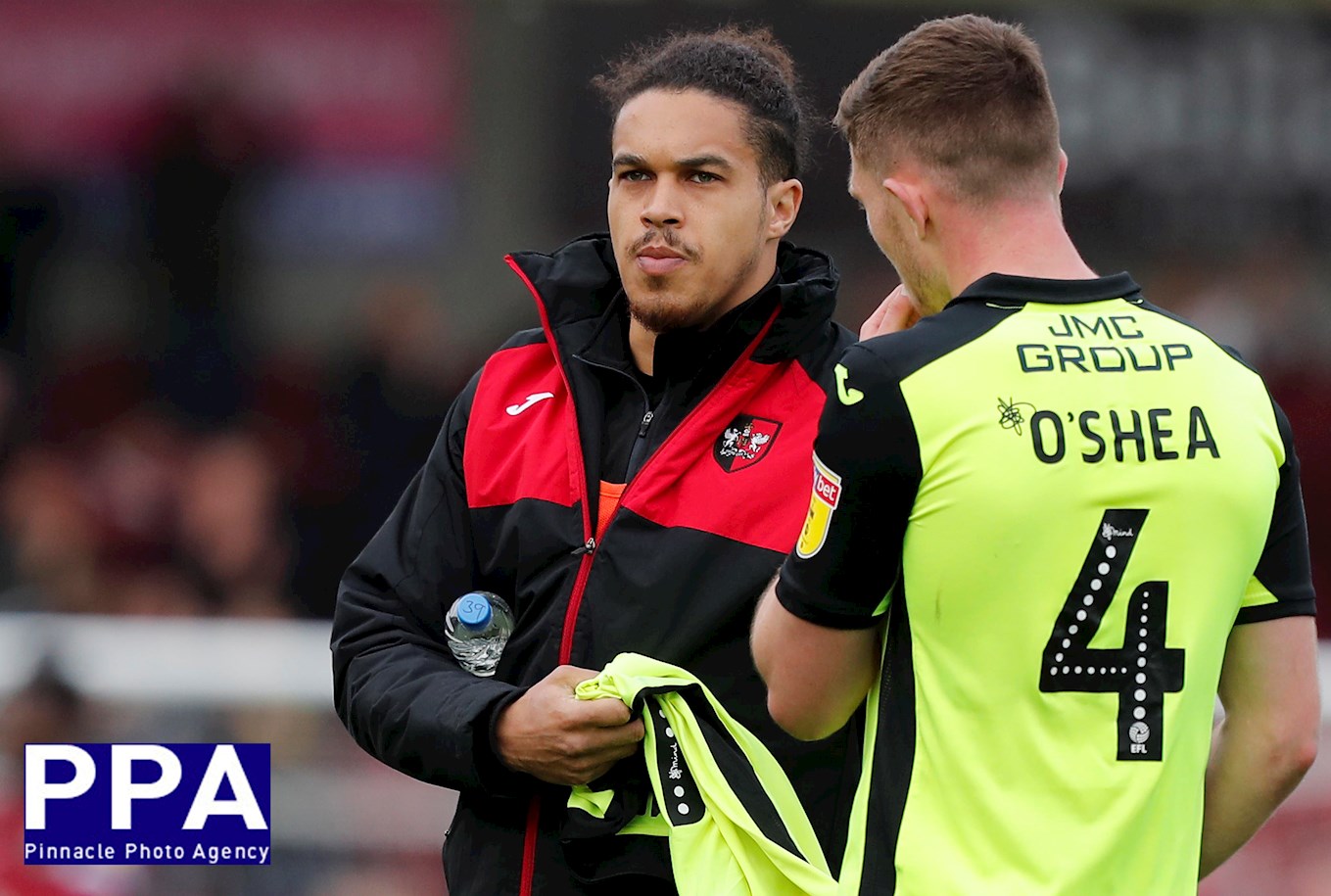 Matt Taylor, a centre-half in his playing days, has also put a lot of time and energy into teaching the young defenders at his disposal. Last season, when he was Under-23s coach, the City boss spent a lot of time with Jordan Storey who, under his guidance, played the final 16 games of the season, before earning a move to Preston North End in the Championship where he has continued to impress.

This season it is 20-year-old Dara O’Shea who has been the benefactor of Matt’s wisdom. The West Brom loanee came to City with no experience of playing in the Football League and was some way from the City starting XI at first.

However, last week he represented Republic of Ireland under-21s on the back of 27 impressive appearances in the Exeter City first team.

“It is great for the young players to have Matt,” said Troy. “You had Jordan Storey last year who, at a certain stage of the season, wasn’t anywhere near it and Matt (Taylor) was working with him one on one and his game improved.

“So it can only stand any defender in good stead. Dara O’Shea came in this year with no experience and he has done really well.

“I am not surprised how well Jordan has done in the Championship though, because he has got the physical attributes.

“At times, watching him train, he would do things and you would think ‘what are you doing?’ But that was down to his naivety because he was so young. So fair play to him. I hope he goes on to have a long, successful career because he is a good lad, Jordan.” 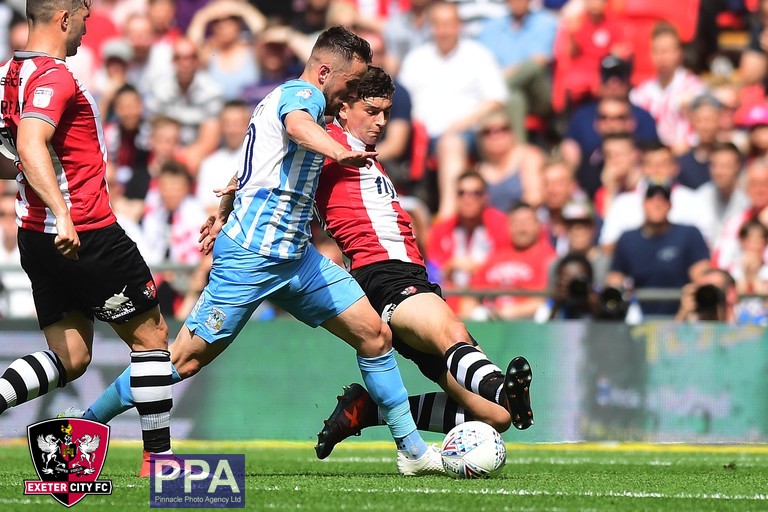 It seems hard to imagine that on November 25, 2017, Jordan Storey had just returned from a 13-game spell with Southern Premier League side Dorchester Town.

However, having been given his chance, in Troy’s absence, he helped City to Wembley for a second time in two seasons and never looked back.

Now Troy, having returned to the starting XI with the Grecians again in the hunt for promotion, Troy has the opportunity to do something similar and make the memories of Accrington – and the play-off final defeat to Blackpool – seem a little more distant in his mind than ‘yesterday’.

“I have said to my family and friends that I am just happy to be training every day, feeling like an athlete and being out there,” said Troy. “It is great to be back playing after what I can only describe as a long, tormenting six months and the fact that I know everything is A okay and that I can contribute to the fantastic work that the team has done already, is brilliant.”