Going out on loan can be tough for young footballers.

Stepping out into the unknown to surround yourself with new people, a new city- or in some cases a new language and culture.

But a number of young footballers opt to take the chance in order to give themselves the best possible opportunity of forging a career in the professional game.

Exeter City are a club that has benefited from the loan system a number of times over the years and it’s probably fair to say that those who have made the temporary switch to St James Park have embraced the club, and we’ve embraced them.

Think back to early last season, a raw Kane Wilson was introduced to League Two football and learned a great deal. In fact, the loan stint the first time around was so beneficial to the youngster that he came back for more this season under Matt Taylor, and he’s continuing to thrive.

The Grecians also welcomed another loanee into the St James Park dressing room in January in the form of Donovan Wilson from Wolverhampton Wanderers.

The youngster is no stranger to the west country though, having spent time with Bristol Rovers before being snapped up by Wolves after impressing.

He was then tested with a loan spell at Port Vale. He made eight appearances for the Valiants and scored once, before returning to Wolves in March 2018.

A culture-shock then followed when Donovan agreed a temporary switch to FC Jumilla in Spain, alongside some of his Wolves teammates for the first half of this season. And it’s fair to say that the learning experience has benefited him.

The youngster explained: “When you go on loan you may not know anyone and it’s a different area. You’re out of your comfort zone, but it’s good to adapt and see how you do in that circumstance. I went to a different country where they don’t speak a lot of English, because it’s not a touristy place. I learned a lot and had to be more independent and learn some of the language, and the food was different. It was a good experience.”

Rather than returning to the Wolves under-23 set-up, Donovan was keen to continue his learning by heading back out on loan, but this time to Exeter. Stepping out of your comfort zone and into the Football League is something the youngster values a great deal. Despite the benefits of playing in the academy and the opportunity to learn in a controlled environment, the forward feels going on loan can only benefit him and his career.

He continued: “In the under-23s there’s a lot more playing and in League Two it’s much more direct so it’s very different in that aspect. In the under-23s a striker would receive the ball and have a lot more touches, but here the striker may stay away from the play and try to win headers. 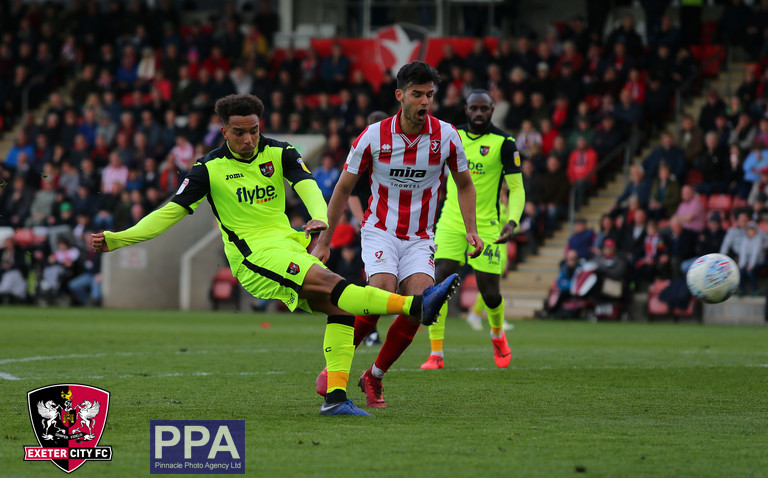 The youngster wants to help the Grecians to success this season

“Of course, the under-23s is a lot more friendly as well, so to come here it’s a lot more physical and nice crowds as well. I think the under-23s is good because you can gain confidence in playing and training every day. You can take the ball and keep trying things again and again, but you need to get out on loan as quick as possible so you can learn proper football in the league.

Donovan made his City debut in the narrow defeat to Bury at St James Park, and arguably, his finest moment in a City shirt so far came away from home at Notts County. With just seconds left to play, the youngster darted down the right before pulling of a fantastic bit of skill and crossing for Nicky Law to head home.

Reflecting on his time so far with City, the youngster gave an honest assessment of how he’s fared at St James Park.

“It’s been a bit up and down to be honest, said Donovan. “I haven’t played as much as I would’ve liked and had an injury which was annoying.

“But against Notts County, the last kick of the game with 10 men for 70 odd minutes, and to get the win with the last kick was an amazing experience and it felt so good.”

Including today the Grecians have just five matches remaining of their Sky Bet League Two fixture list. With City sitting in the play-off places before kick-off today, as well as continue his personal development, Donovan is keen to help the Grecians to success come the end of the 2018/19 campaign. 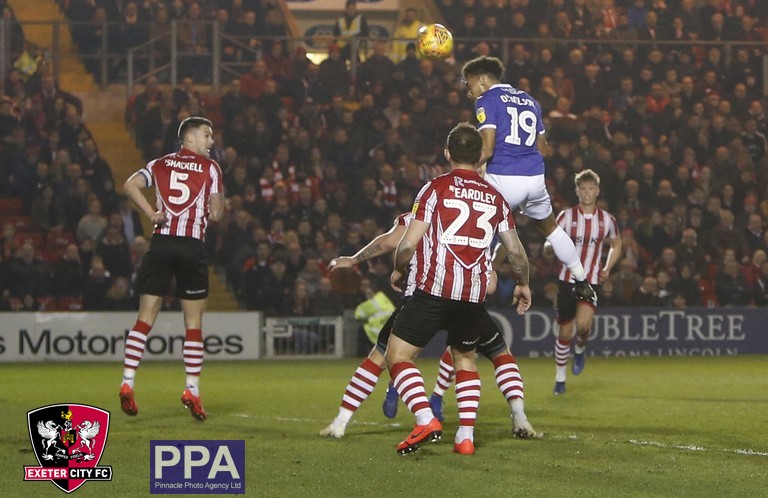 Donovan in action against Lincoln City

With the club in a positive position at the moment, the 22-year-old wants to make a contribution going into the remaining games.

“We’re in the play-offs so we’re hoping to stay there and kick on, explained Donovan. “The aim is to get promoted at the end of the day. The club has been unlucky over the last two years so hopefully we can put it right this year.”

The Grecians have a healthy mix of experience in the form of Dean Moxey, Craig Woodman and Jake Taylor, but added to that they also have the youth and exuberance of the likes of Donovan, Kane Wilson and Randell Williams. And when the moment comes, who’s to say it isn’t another loanee who writes his name into Exeter City history like a certain Jack Stacey a couple of years ago.