In this monthly column, written for the Express & Echo, he brings an exclusive look behind the scenes at St James Park.

As we move towards the end of the season, it’s a good time to reflect on what has been something of a rollercoaster of a year. At the beginning of the season, with a new first-time manager, I think many fans would have been happy with a mid-table position, laying the groundwork and preparing for the seasons ahead. But ‘Super Matty Taylor’ and his dream team, and the team behind them, gave us all something to dream about, in a way that only football can.

And going into our final two games we’re holding tightly, gripping even, onto that seventh spot…It will be great to see our fans throwing their support behind the team. Next up is Oldham at home on April 27; it would be fantastic to see the park filled for that match. That’s swiftly followed by Forest Green Rovers away on May 4, when we’ll know for sure where we’ll finish this year.

And if it is Wembley…again, then let’s hope it’s third time lucky. After the last two years I think the Sat Nav on the Range Rover will take me there on its own. 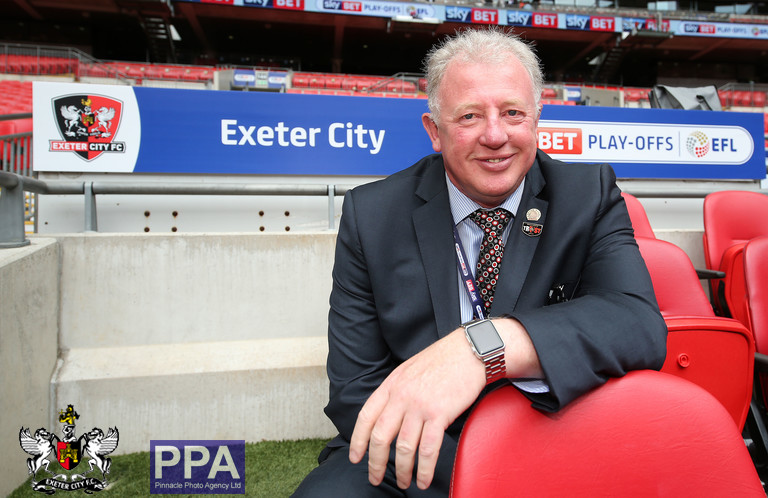 Julian Tagg at Wembley Stadium in 2017

The commercial team continue to ramp up their events, there’s a not-to-be-missed night of ABBA on the pitch, courtesy of the stars of the West End production of Mamma Mia! And then an evening with Harry Redknapp, which is guaranteed to sell like hotcakes, or should we say jam roly-poly…and the club awards night this Saturday, which takes place in the Uni’s Great Hall, when we celebrate all the great things about our club. More details about all those events here: https://www.exetercityfc.co.uk/news/upcoming-events/

Congratulations to Torquay, our good friends down the road. We’ll be playing them in a pre-season friendly at Plainmoor later on in the year. It’s worth knowing that when you buy your season ticket and you join the Supporters’ Trust at the same time, as an extra bonus you get a free ticket to a pre-season home match, so although it won’t be Torquay, there should be some good games to choose from. 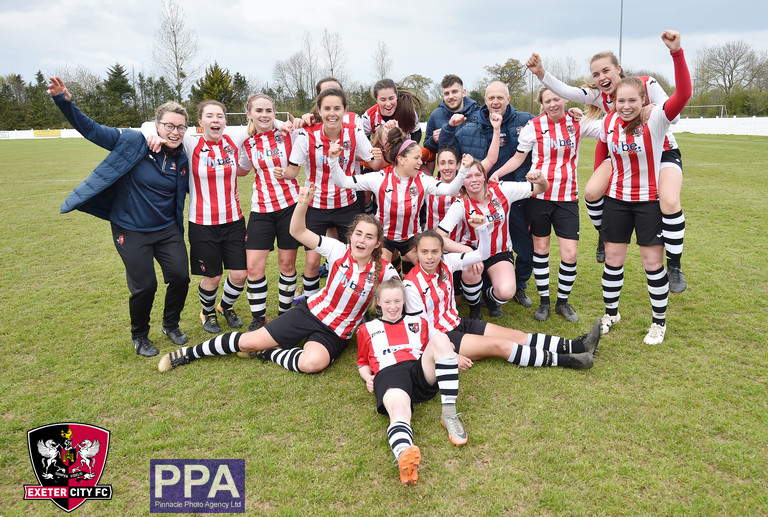 Talking of promotion, what a great result for our Exeter City Ladies’ team – who finished top of the league with a fantastic 3-1 win over Keynsham Town Development last week, meaning they are now promoted to the FA Women’s National League Division 1 South West.We now have a team of league-winning quality and a dedicated girls’ and women’s football pathway at Exeter City. Next steps are to launch a development squad to feed into the first team and to grow the women’s academy into something as successful as our youth academy, which may take some time, but certainly is our goal. Pun intended.

Of course, it is about football, but it’s so much more than that, it’s people, it’s family, it’s community. And one place that is truly demonstrated is through the work of the club’s partner charity CITY Community Trust, whose work has been in the news a lot lately.

We’ve seen the two amazing teenagers, Jess and Izzy, who delivered a TEDxExeter talk about a project they worked on which helped increase donations to foodbanks across the country. That project was part of the National Citizen Service, a brilliant programme which is delivered by CITY Community Trust to more than 600 young people every year. And then there was the Down’s syndrome team who were featured in BBC’s Spotlight talking about how much they love playing football. If those kinds of stories don’t warm your heart and support a community club like ours, then nothing will.