Following the end of the 2018/19 season, naturally there was a disappointment that the Grecians' season had ended earlier than they'd hoped.

But amongst that frustration there was one major positive aspect of City’s end of season run in. The goal scoring form of Ryan Bowman.

City fans had been made to wait to see their new forward hit the net, but when he did, the goals simply kept on coming.

That’s not to say that when those goals weren’t flying in that Ryan’s performances didn’t warrant a goal. His tenacious running, a physical approach, and his ability to bring his team mates into play were all attributes that earned him a great deal of respect from supporters. And then came the goals.

After what you may call an unlucky streak that elusive goal came, ironically, on his 13th City appearance.

After wonderful wing-play from Lee Martin, the midfielder sent in a teasing cross which begged to be finished off, and Ryan duly obliged.

It took just seven minutes for the City striker to net his second for the club and he scored three more times in the final five matches of the season leaving supporters excited about what Ryan can produce in the 2019/20 season.

The newly-married forward has settled well in Devon and is looking forward to what the new season will bring as he aims to help the Grecians to success.

“I can’t wait to get started,” said Ryan. “It’s been a tough pre-season, but a positive one for us. Personally, I’ve got a couple of goals and hopefully I can start the season as I ended last season with the goals. I’m really looking forward to it.

“I got married in the summer, it was a brilliant day. My partner and her family are from this way and it’s good to be back here.

“We’ve had a busy summer getting married and then going away on holiday. I went up north to see my daughter as well. We go into Exeter and it’s a lovely town and a lovely place to live.” 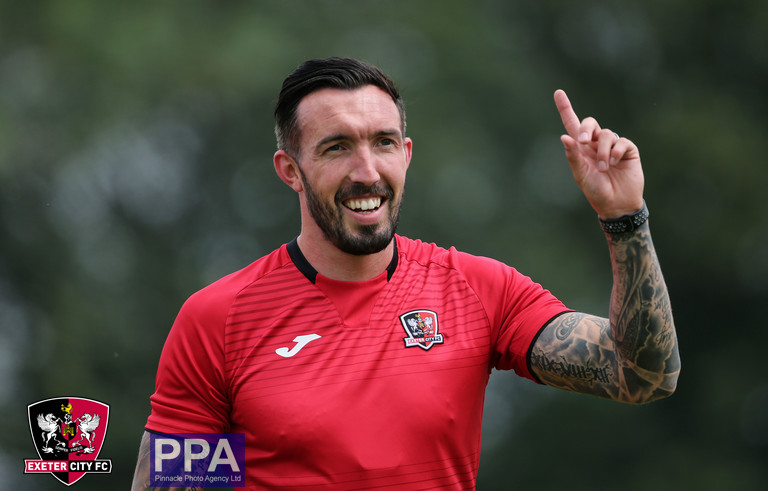 Ryan has settled well to live with the Grecians

There’s no doubt it can be tough to hit the ground running at a new club, especially when you arrive in the January transfer window into a majorly settled squad. Not to mention, be the man charged with replacing a goal scorer as prolific as Jayden Stockley, who secured a move to Championship side Preston North End last season.

Though different players, Ryan admitted that the comparisons could well have added extra pressure on the forward’s shoulders upon his arrival.

He continued: “I read things about being Stockley’s replacement which added a bit more pressure.

“Joining in January is tough because the core of the team has been together since pre-season so it’s difficult to come in and try to cement your place in there.

“I knew I had to come in and score goals, that’s what he (Stockley) did and why he got his move. I came in and hoped to do the same thing, I didn’t score in the first handful of games and that can put a bit of pressure on your shoulders. Obviously, you’re a striker and you’ve been brought to the club to score goals, but I ended the season really well so hopefully I can carry that on.”

Having found his scoring form, the striker grew in confidence and thrived towards the end of the season, and that’s something Ryan is keen to continue for the Grecians.

“I’ve scored goals wherever I’ve been so I knew I could do that,” explained Ryan. “It’s a case of scoring your first goal, however easy it may be, and luckily Lee Martin put it on a plate for me, but I knew that once I got one, the rest would follow.

“It adds pressure on your shoulders if you don’t score, and once I got the first goal, I got the second within 10 minutes. I hadn’t scored in five months and then got two in 10 minutes, that’s how it works, but then I went on to score a few more goals after that. Unfortunately, we didn’t get into the play-offs but that’s got to be something we will look towards this season.

Ryan picked up from where he left off as he netted against Jersey FA, Bath City and Weston-Super-Mare in pre-season, a period where the Grecians have been hard at work to prepare for the League Two season.

“It’s been tough, we went to Jersey and did some naughty runs over there!” laughed Ryan. “We played against Jersey FA and I got a couple of goals. As a striker you thrive off goals and you want to score every time you go on the pitch and, hopefully, I can start that on Saturday. We’ve worked on more shape than I’ve ever worked on before at any other club, which is good. Everyone knows what they’re supposed to be doing and what the manager wants from them. We’re raring to go.”

Part of manager Matt Taylor’s recruitment has seen him bring in Nicky Ajose to line up alongside Ryan. The two have already shown flashes of what could be a dangerous partnership for City, and the forward is excited about playing alongside the former Charlton Athletic man, as well as the new faces within the City dressing room.

As an experienced member of the squad, Ryan has also been impressed with youngster Ben Seymour and is looking forward to watching him develop over the coming season.

“You come in and see new faces and straight away it gives you a lift,” explained the City number 12. “I know a couple from playing with them previously so that’s another boost. It keeps you on your toes and there’s competition for places, especially up front.

“You can tell in training that Nicky’s got so much quality and that he’s played at a higher level. We’ve played together a couple of times in pre-season and I’m looking forward to playing alongside him this season. 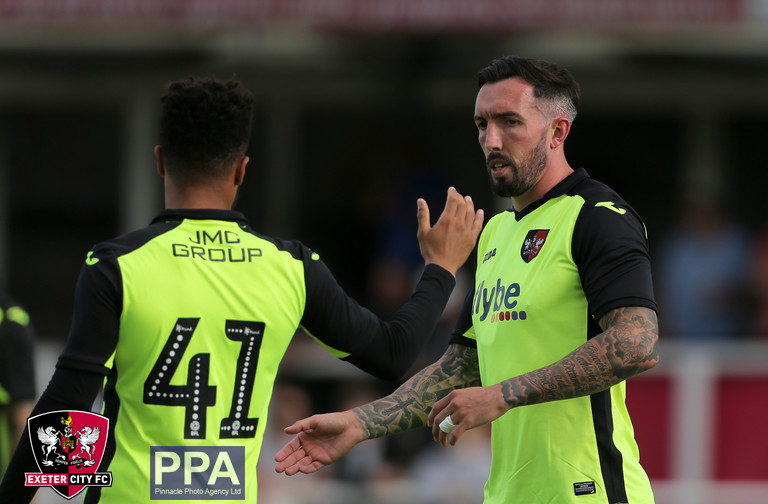 “Ben’s been one of our best players in pre-season. I didn’t see much of him last season as he didn’t really get in and around the team, he was training with us and you could tell he had quality, but this pre-season I’ve been really pleased with him. I’d be delighted to play with him if I get a chance.”

With acquisitions of quality and experience, in the likes of Nicky Ajose, Tom Parkes and Alex Fisher, to name just a few, where does Ryan feel City can finish up come the end of the 2019/20 season?

“With the squad we’ve got and the ability we’ve got then there’s no reason why we can’t get into a top three place come the end of the season,” said the forward. “That’s something we’re running for, definitely. There will be a lot of tough games, we know that, and there are a lot of tough teams in the league but with the players we’ve got we should be pushing towards the top.

“We’ve got a really good squad in terms of depth. We’ve got seven or eight boys on the bench that could easily make the starting 11. No one knows who is going to be in the starting 11 yet. There’s a lot of competition for places so we need to make sure we’re right in training and if you start on Saturday then you start and give 100%, but if you’re not then you come off the bench and you do what you can.”

The Grecians are about to embark on another competitive League Two campaign. Throughout the league there are difficult opponents who will back themselves, like the Grecians, to be competing towards the top of the table. But with a fit and firing Ryan Bowman, added to the rest of the City squad, they are sure to be a handful for most opponents in the 2019/20 campaign.