It had all come down to the final day of the season, with the Grecians requring a win to secure their League One status. The visitors that day were Huddersfield Town and St James Park was full to bursting!

City would get off to the worst start possible, going behind in the second minute as a defensive error let in Gary Roberts, his neat turn and low shot from the edge of the area beat Paul Jones in the Exeter goal.

City would only trail for 20 minutes, as Matt Taylor powered home a trademark header from a Ryan Harley corner. The game remained on a knife-edge for the next sixty minutes, as some inspired keeping by Paul Jones kept the scores level.

With eight minutes to go, Paul Jones’ long kick forward was flicked on towards George Friend, who had returned on loan from Wolves. Friend’s outstretched left leg cushioned the ball into the path of Harley who hit a sublime right-foot volley low past Alex Smithies and into the Huddersfield net. City won 2-1 and remained in League One for a further two seasons. 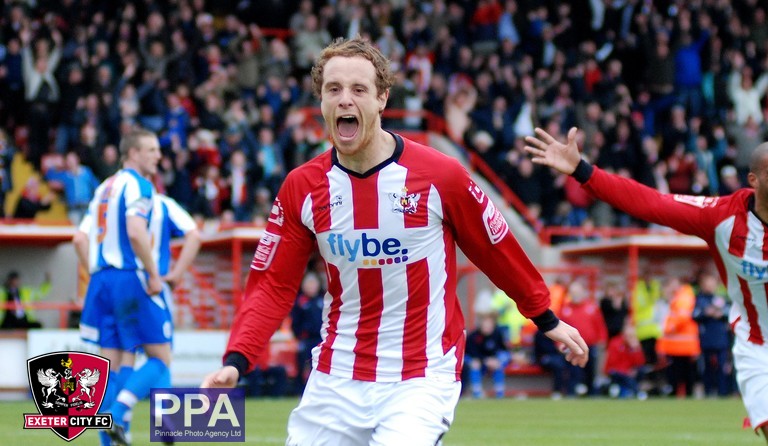 Manager Paul Tisdale told BBC Radio Devon at full time: "It's a relief and to leave it late on the last day of the season is a little too close for comfort but we made it.

"We've had a great season, and I can now look back on it and enjoy every minute.

"It's been a great experience and we've achieved today what we achieved on the last day of last year which is League One status."