On day 10 we only have to head back a couple of months for a day to remember as rivals Plymouth Argyle visited the Park.

In what was the first league meeting between the two sides in three seasons, a second-half onslaught from City gave the Grecians a famous 4-0 victory over Plymouth Argyle, in what was a breathtaking Devon Derby at a sold-out St James Park.

The Grecians ended the first-half well, and were rewarded for their efforts in the 41st-miunte as they had a penalty as Josh Grant pulled the back of Lee Martin who was racing through on goal.

Nicky Law stepped up and left Plymouth keeper Alex Palmer helpless in goal as the No. 8 slotted the ball comfortably to the right-side of the goal in front of the Plymouth faithful.

The second half began with Williams crossing for Tom Parkes to glance a header into the roof of the net. And, although Aaron Martin had to put in a crucial sliding challenge to deny Joel Grant from pulling a goal back almost immediately, City took control of the match from that point on.

The third goal was a move of real beauty as Jake Taylor, Nicky Law and Archie Collins passed the ball around well in midfield before sliding in Williams who dinked a shot over Palmer to send the Thatchers Big Bank in to raptures. 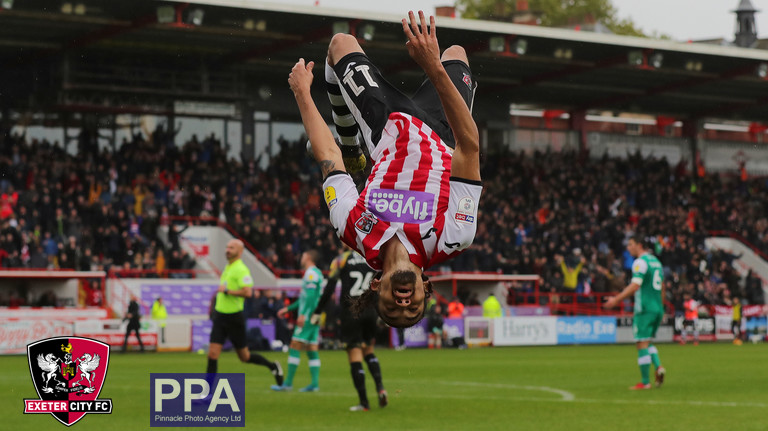 City smelt blood and Bowman’s blocked effort a minute later was one of many before the Grecians added a fourth in the 84th minutes.

Jake Taylor was the provider as he curled a great shot off the inside of the post from 25 yards. The ball rebounded out into the area where Law was left with a simple tap-in to complete a memorable afternoon for the Grecians.

After the match, Manager Matt Taylor said: "We were relentless; it was every single player and the substitutes and the crowd and time and time again, it was us today – first to the ball, incredible in terms of our press and our attack, our forward intent, and we were strong when we needed to be in the big moments at the back.”