On day 9, we head back to St James Park on Thursday, May 17 and the play-off semi-final against Lincoln City.

The first leg at Sincil Bank was a very even 0-0 and set up a winner-takes-all clash at the Park with City having eyes on making Wembley for a second season in a row...

Both sides looked to make a quick start, but it was City who would strike first through Jayden Stockley in the 26th minute. Jordan Moore-Taylor’s long ball was knocked forward to Pierce Sweeney and the defender calmly nodded the ball to his right, and into the path of the oncoming Stockley. City’s top scorer was first to the loose ball and he then rifled the ball home from a tight angle to send the Big Bank into raptures.

Seconds after half-time, the tie was lit up by a moment of genius as Boateng doubled City’s lead in style. Having picked up the ball 10 yards inside his own half, there appeared to be little danger for Lincoln City as Hiram Boateng charged forward.

The shot was inch perfect as he crashed off the inside of the post and into the back of the net to give the Grecians a 2-0 lead in the match. 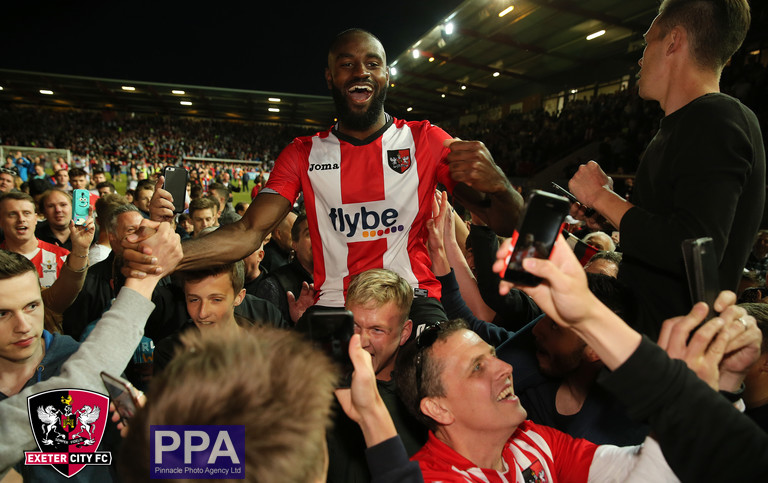 In the 70th minute Ryan Harley produced a moment of magic to make it 3-0. Sweeney picked out the midfielder from a throw-in and then it was all Harley as he pummelled a sublime half-volley from 30 yards out. The ball sailed in to the top corner to hand City a three-goal cushion in remarkable fashion.

Minutes later, Lincoln struck back as Matt Green gave the visitors a glimmer of hope with 10 minutes remaining. Green pounced on to Rhead’s flick-on and then dinked the ball past Pym.

City’s defence held firm to ensure the Grecians booked their place at Wembley for a second consecutive season.

Speaking after the match, Manager Paul Tisdale said: "I'm delighted with the performance. It doesn't always get the result you think it deserves, but today it did.

"Three goals, some really offensive, attacking, purposeful play and some great defending at the end. I'm just really proud of the way the players took all the direction we gave them."