He has made the gap from youth and under-23s football to the rough and physical nature of Sky Bet League Two look jumpable, even though the comparison between the two is very wide.

Following his appearance at St Andrews, against Coventry City, the 20-year-old striker has made 14 more appearances for the Grecians, causing a nuisance to defenders with a lot more experience and strength than him, and won an injury-time penalty against Leyton Orient having produced a sharp turn in the box only to be hauled down by Josh Coulson.

It is that willingness to battle, along with his constant chasing down of opponents, that has arguably been the most impressive thing about Ben’s game as he has come into the first team. However, he admits he had to get used to the physicality of men’s football and that is where a couple of loan spells – at Bideford and Dorchester – really helped him out.

“There is a massive comparison between the physicality of play when I have been out on loan to League Two and it has definitely shown,” said Ben. “I just have to get around the defenders. They might be big, but hopefully I can be just a little bit sharper than them and then that will bring me joy.”

He certainly got plenty of joy at Bideford. A record of 21 goals in 33 games for the Southern League club, certainly put him into the first team reckoning and when he added that with a spell of 14 goals in 26 games for Dorchester United, manager Matt Taylor told the press in the summer that Ben would be involved in the matchday squads this season rather than being loaned out again.

“The spell at Bideford was great,” recalled Ben. “It came off the back of a Weston-super-Mare loan where maybe I wasn’t quite ready and so my confidence was down, but Bideford brought me in, and I was scoring goals and really enjoying my football and getting back to where I needed to be. 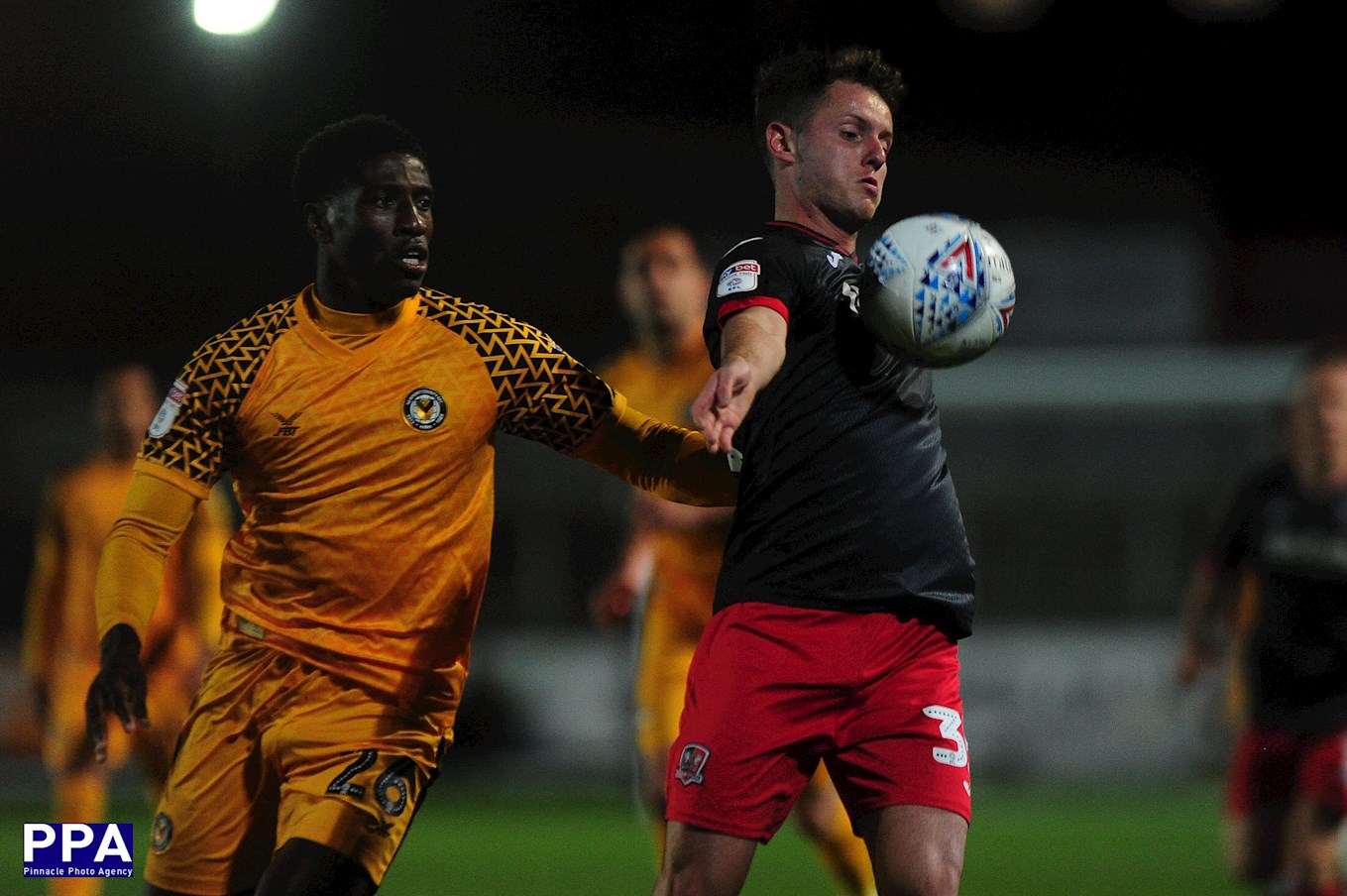 Ben in action in the Leasing.com Trophy against Newport County AFC

“I think it is just the confidence I got from those two loans spells that helped the most as well. It is about getting the confidence of putting the ball in the back of the net most weeks and just playing. Playing is everything in football and I just feel if you are not playing, you are not getting match sharp and then you are not ready to play on the Saturday, so I think loan moves have been a massive part of my development.”

Ben also has a lot to thank Exeter City Academy for. He joined the set up at under-9s, before leaving for a few years on the wishes of his parents, and then returning at under-14 level. Exeter City’s Academy has a growing reputation as one of the best in the country for producing young players, with the likes of Ollie Watkins, Ethan Ampadu and Matt Grimes all recently graduating from the youth system at the Cliff Hill training ground. And then you have got nine players, who have all come from through the youth set up at City, who have represented the first team this campaign.

However, it is not just on the football side of things where Ben praises the academy, he says off the field they have made him into the person he is as well.

“I owe a lot to the academy,” he said. “They have brought me up to who I am today, both on the pitch and off the pitch, and they are great. They give you great advice and make you into a well-rounded person.

“The best piece of advice I have been given from the academy is just about keeping your head down and keep grafting, really. That will get you a very long way in football. You have to never become complacent, even if you have got your spot in the team. You should always work hard because working hard is just the foundation of doing well.”

That lesson is something Ben has taken into training as well. Ben says working hard there is the basis of getting picked in the team and performing to the best of your ability on a s Saturday.

“I would say training has a huge part to say in whether you play games or not,” he said. “It is just the start of doing everything you can for the team and then we go out week in, week out, trying to win the game and we go into the game thinking that we can win. It is just building our confidence and our form has shown that.” 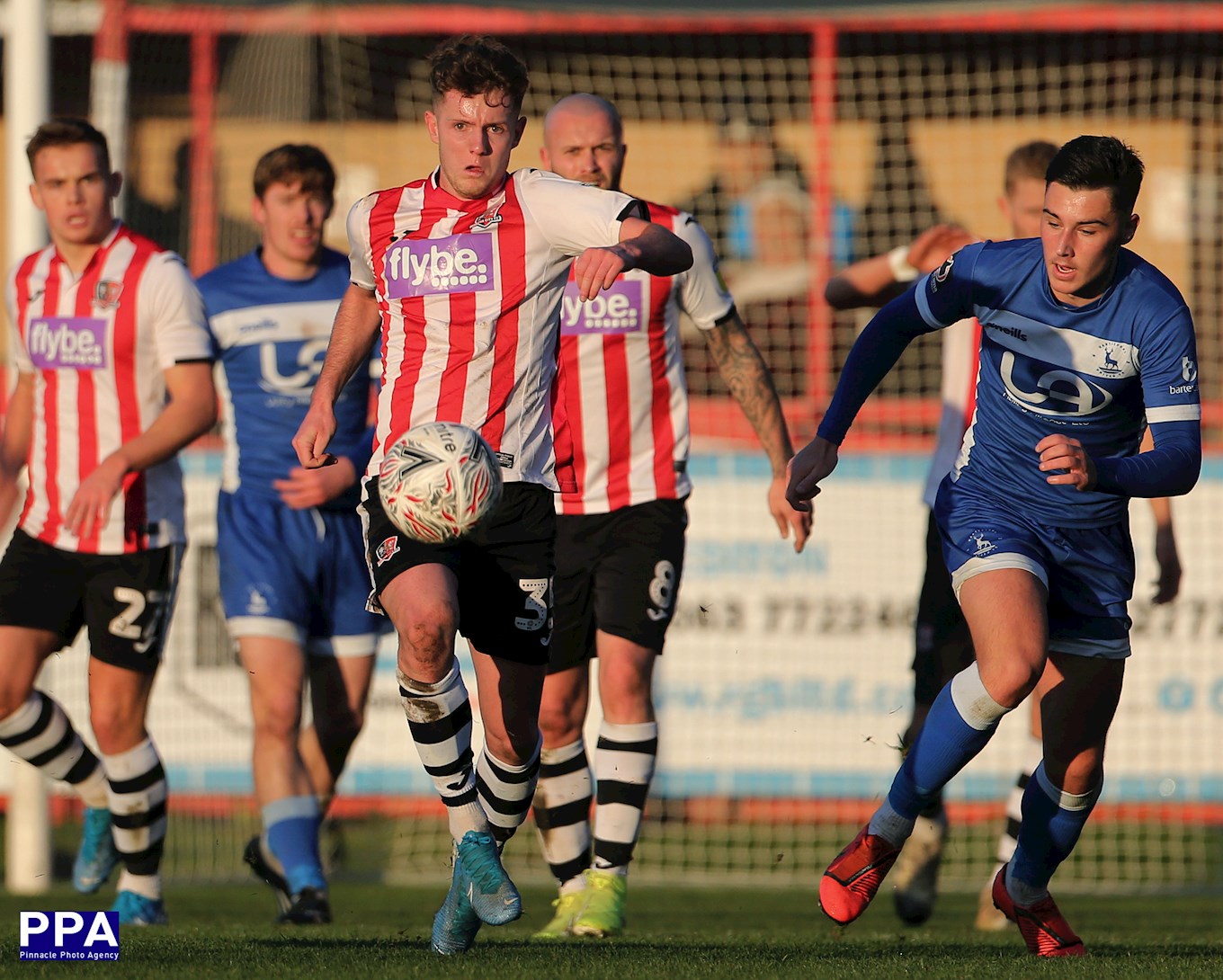 Ben has also played in all three Emirates FA Cup matches the Grecians have had this campaign, including starting the last match at home to Hartlepool. The Grecians still need to beat the Pools on Tuesday, in a second-round replay at Victoria Park, to book their place in the third round of the competition, but Ben says it is a competition he is enjoying being part of because of its importance within the English game.

“Growing up you always see the magic of the FA Cup and how good it is for everyone to watch,” he said. “Prior to this season I had never been in the first round proper onwards, so it was a bit of an achievement to play in those rounds.

“It is always pleasing to get game time. It shows that the manager believes in me and hopefully I can start giving back like I did against Leyton Orient with the assist, but one target of mine is to put the ball in the back of the net and that is something that I am working on day in, day out, and hopefully I can achieve it soon.”

It is perhaps not surprising that a striker, who has been so prolific during his loan spells, is keen to get that rush of emotions on scoring his first goal in City colours. However, the feeling of winning that last-minute penalty came pretty close. 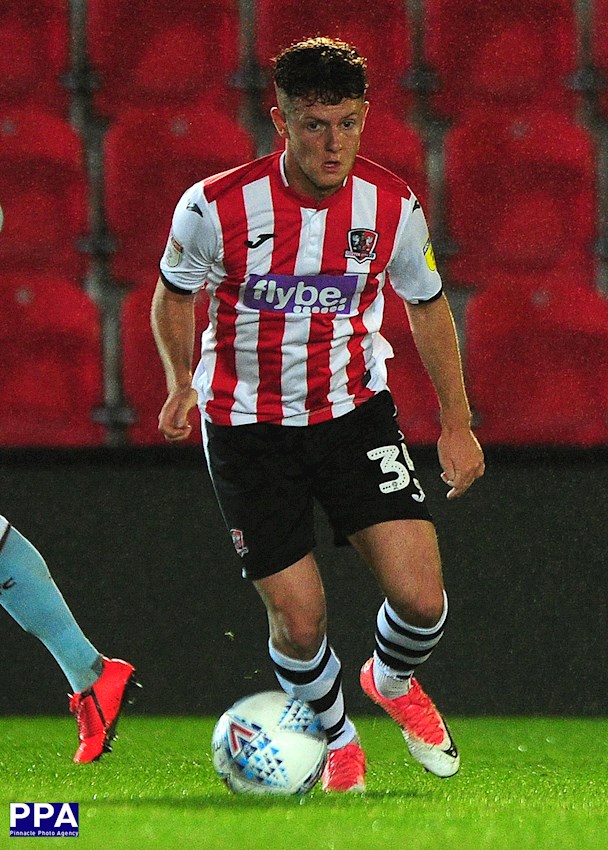 “It was crazy to be fair,” said Ben. “I came on and we were losing at the time and we were just pushing everyone forward and then their defender has brought me down, at first I didn’t even hear the whistle go because the crowd was so loud. However, it was a great feeling winning the penalty and we went on to get a point out of that game and on another day, we could have potentially gone on to win it.”

Indeed, City could have, with Ben going close again, along with fellow academy graduate Jack Sparkes. However, it was – at the time – a point that kept The Grecians at the top of the Sky Bet League Two table. They have fallen to fourth since, but the aim from Ben and the rest of his squad his clear.

“As a team we want to get promoted,” he said. “And we go into every game thinking we can win.”