It’s a return to League Two football for the Grecians on Saturday, as they face fellow promotion hunting Northampton Town at St James Park.

Founded in 1897, The Cobblers didn’t join The Football League until their election all the way back in 1920. After playing their football in the Southern League, they joined the Division Three (South), which was paired with the Division Three (North).

After floating between Divisions 4 and 2, the club managed to break into Division One in 1965 following a second placed finish, as well as Quarter Finals in the League Cup. Ultimately though, this led to back to back relegations and Northampton floating between the bottom Divisions again.

After the reformation of the Football League in 2004, The Cobblers found themselves in League Two, where they achieved promotion in 2006 following a second placed finish. After relegation back to League Two in 2009, they would finally win another league title after securing League Two in 2016 on an impressive 99 points. Since returning to League Two in 2018, the club achieved a fairly underwhelming 15th placed finish in their first season back, which already looking to be bettered this season.

This will be Exeter City’s 116th meeting with Northampton in all competitions, with their biggest win against The Cobblers in 1930, where they won 6-4. It is Northampton however, who hold the biggest win between the sides, as in 1958, Northampton ran out 9-0 winners in Division Three (South).

Born in Bristol on the 14th November 1963, Keith Curle made an impressive 708 appearances during his lengthy playing career. Starting off in his native Bristol for Bristol Rovers, he played for clubs such as Manchester City, Wolverhampton Wanderers and controversially Bristol City.

His first job in management would be in a player-manager role, where he played for and managed Mansfield Town. He would go on to manage clubs such as Chester City, Torquay United, Notts County and Carlisle United, before ultimately taking the Northampton job in October 2018 after the sacking of Dean Austin.

Northampton Town have been playing at Sixfields since 1994, following a spell at the County Cricket Ground alongside the Northamptonshire County Cricket Club. Due to the size of the cricket pitch, Northampton Town were not able to construct stands on every side, meaning that they had to decide whether to stay there or construct a more suitable ground. In the end, they chose to create a new ground that is more suitable for footballing conditions.

With a brand new ground available in the region and nearby Coventry City having issues with the landlord at the Ricoh Arena, The Cobblers and The Sky Blues came to an agreement that both teams would play their football at Sixfields for the 2013-14 season. In terms of attendance, the record attendance at the stadium was to capacity, as Northampton hosted Premier League side Manchester United in the EFL Cup Third Round.

Andy Williams may be a familiar name to City fans, following his last minute equaliser against The Grecians at home last season. Despite being 33 years of age now, the Hereford born striker has continued to demonstrate his goal scoring ability, by topping the charts of Northampton’s goal scorers this season.

Starting his career at his local side Hereford, the striker spent the first part of his career in the West Country, at clubs such as Yeovil, Bristol Rovers and Swindon. However, in 2015, Williams moved up north to join Doncaster Rovers, where he scored 23 goals in 92 games. He joined current club Northampton in 2018 and has thus far scored 18 goals in 57 games.

Take a look at both sides seasons so far... 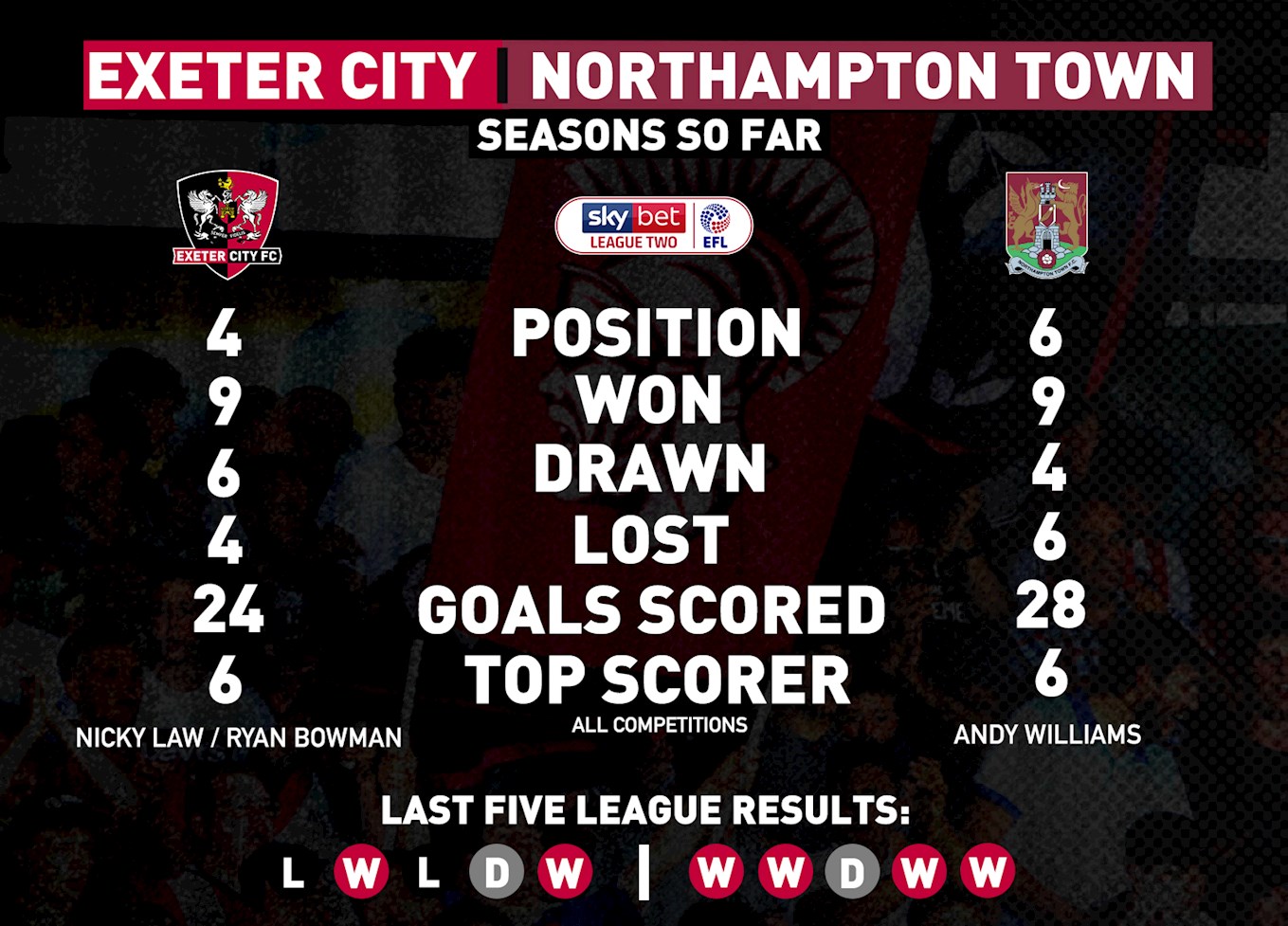 Goals from Aaron Pierre and Andy Williams gave mid table Northampton a victory over the playoff chasing Grecians, despite a 61st minute goal from Aaron Martin.

After leading in the game twice, City were unable to hold onto the lead, as Northampton score a 90th minute equaliser at the death. Jake Taylor and Jayden Stockley were on target for The Grecians.

5,077 people watched, as Northampton clinched the League Two title at St James Park, following a goalless draw between The Grecians and The Cobblers.