In recent seasons it's fair to say that Exeter City have benefited from the loan market.

The opportunity to take young players temporarily from clubs and give them the chance to play regularly and develop.

One thing that must be of note about the recent temporary signings that the Grecians have made is that they have all fully immersed themselves within the club and all learned what it means to be a part of it.

Jack Stacey, probably the most famous of all as he confirmed his place in Exeter City history back in the 2016/17 season for that goal against Carlisle United. Luke Croll too, who made his stint permanent and is now in his third year at City.

Last season, the dynamic duo of Kane Wilson and Kyle Edwards provided not only entertainment but fantastic ability on the field of which has seen the latter challenge for a place in the first team at West Bromwich Albion. The former has come back for another bite at the cherry to a place where he is clearly comfortable and a place where he will be developed even further.

This season we’ve also welcomed Tristan Abrahams who is enjoying his learning stint in Devon, as well as Chiedozie Ogbene who is now fighting to be a part of Brentford’s first team plans. And let’s hope young Jaden Brown can follow in the footsteps of those before him and become a favourite at St James Park in the remaining months of the season.

But if there’s one player who is thriving from his loan spell and the opportunity of playing in the Football League then it’s Dara O’Shea.

Having joined on an initial loan until January, that was then extended until the end of the 2018/19 campaign and for good reason having impressed during his time in Devon.

“I’m loving it here,” smiled Dara. “It’s a great club, all the lads are good, Matty (Matt Taylor) is good and so are the coaches. The fans are excellent as well and I’m enjoying my time here.” 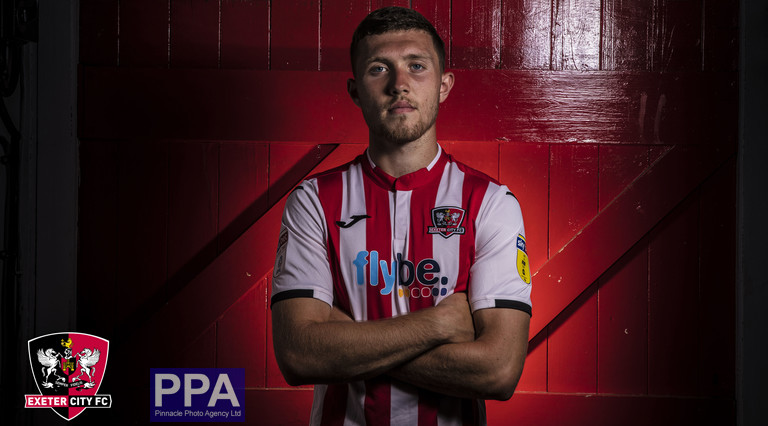 Dara says he is enjoying life at St James Park

Dara has good reason for enjoying himself. The 19-year-old has turned out 19 times so far this season and is progressing all the time with his assurance on the ball as well as the ability to challenge in the air. He’s also been part of what’s been a good run defensively for City who have kept three clean sheets from their last four matches.

“It’s what defenders are there for, to keep clean sheets,” said Dara. “I think three out of the last four games is good and we need to keep it coming. Everyone knows their roles, everyone is willing to work hard and fight for each other. Everyone is on the same page and it’s coming off as a back five.”

There’s no doubt that Dara deserves a great deal of credit for his impressive performances so far, but the youngster was also keen to praise the experience around him as they help him to learn and develop with the aim of going back to West Brom ready to battle for a first team start in the coming seasons.

“Deano (Dean Moxey) is good to play alongside. He’s played at a higher level, he has that experience and I’m learning from seeing what he does and mirroring that. I tried to take tips last year at Hereford and I do it at West Brom all the time as well. It’s about taking tips off the older pros and seeing what they do. Deano is a great example to play alongside and so is Woody (Craig Woodman.) 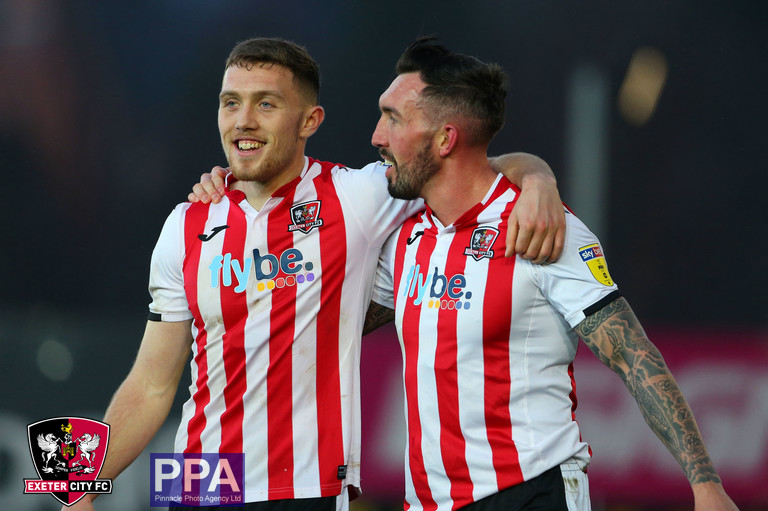 Dara says he is enjoying life at St James Park

It wasn’t always going to be plain sailing for the youngster who has had to wait for his chance in the centre of defence. His first match for the Grecians came in the EFL Cup away at Fulham at the end of August and he didn’t feature in a league match until he was an 89th minute substitute away at Port Vale on September 29, 2018. But following that, he has been able to establish himself as an excellent defender in the Grecians’ back line.

Dara in action for the Grecians

“I take each game as it comes and don’t want to look too much ahead but I want to keep enjoying my football.”

All of this wouldn’t be possible, though, without the support of his parent club West Bromwich Albion, a club that the Grecians seem to have struck a positive relationship with regarding loaning players.

Dara praised the setup at the Baggies for allowing him the opportunity to step into League Two to play regularly for the Grecians.

He explained: “The good thing about West Brom is that they let us go on loan and get experience that way and then hopefully come back ready for the first team. West Brom have been great, Kane is here now, it’s been good, he and I are sharing (accommodation) and he’s a good lad and we get on well. I’ve played with him a lot back at West Brom, in the under-23s and through the under-18s as well.”

The notable thing about Dara is a focus and determination to not just better himself but help the club to success, another example of a loan player endearing themselves to the City faithful. A player who understands that with hard work his time may come at West Brom, but for now, he’s doing his best to help the Grecians.

“As soon as I got here really, I knew I wanted to be here until the end of the season,” said Dara. “To try and get promoted. I’ve loved it here, everyone has been good to me. I’ve matured a bit in my game, and I’ve learned a lot and I’m taking bits from Matty because he helps me a lot with my positional sense and knowing what to do at the right time. I’ve grown a bit physically as well, but the main thing is that I’m learning.”

Having tasted promotion last season with Hereford as they were crowned Southern League Premier Champions, which proved another fantastic learning curve for the Irishman, it’s clear he wants to claim a second one but this time with the Grecians. And with the season moving into the latter months Dara says he and his team mates will be taking each game as it comes.

He continued: “I think we’re all on the same page and it’s great to work hard. We have to focus on ourselves really and forget about everyone else, just try to get the three points every game.

“They’re huge games but we’ll take each one as it comes and look forward to the next and not look too far ahead. We want to be in and around it and we want to get promoted. The boys have been talking about last year in the play-offs but hopefully we can push on and get into the automatic places.”

If Dara can in fact ensure the Grecians secure themselves a spot in League One next season under Matt Taylor then there’s no doubt his name will sit with some of the top names of players who have come on loan to the club, and there’s no doubt with a player of Dara’s character, City will be more than battling for it as they hope to achieve success at the end of the season.