On this day, one hundred years ago, 2nd February 1919, the City lost another of their former players. Billy Stoneman’s death in France was the club’s thirteenth known fatality of WW1.

Just days after the news of Stoneman’s death, the Echo’s chief football correspondent “Rover” caught up with Arthur Chadwick, who’d just been reappointed City manager. When asked what the future held for Exeter City, Chadwick was understandably guarded:

“Exeter, you know, has fared badly with its players in the war. Poor Arthur Evans and Gus Harding, to mention only the first eleven, have been killed. Smith has lost a leg, and Marshall, I gather from a letter of his which I have seen, has finished with football. These are serious losses.”

Chadwick was referring to pros on the books. Harding, it turned out, had survived the war. Another, Fred Goodwin, was so badly wounded he wouldn’t play again. Besides Evans, there were three former City pros who’d been killed: Spencer Bassett, William Kirby and Joe Bulcock.

Of the City amateurs who lost their lives, Billy Stoneman was one of the ones who’d turned out for the Reserves in the months leading up to the war. The others were George White, John Webb, Fred Bailey, Edwin Clark and Fred Hunt. Three other fatalities had played for the club before it went pro in 1908: Evelyn Lintott, Len Turner and Percy Worner.

As with a number of these amateurs, Stoneman was born and bred in Exeter. He’d grown up in St Leonard’s, and before the war had been living in Old Tiverton Road, a draper’s traveller by trade.

At centre-forward, as well as getting games for the City Reserves, he did make one first team appearance – towards the end of the 1907-08 season, the club’s last as an amateur organisation. He also starred for the successful St Leonard’s XI in 1912.

Billy had served as a private with a territorial force, the Duke of Cornwall’s Light Infantry 1/4th Battalion. On his way back to Devon from Palestine he contracted influenza, and died at a British Military Hospital near Lyon.

He’s commemorated at the St Germain-au-Mont-d’Or British Military Cemetery, and on a plaque in the Garden of Remembrance at St James Park.

Exeter City historian, Aidan Hamilton, travelled to the military cemetery at St Germain au Mont d’Or near Lyons to lay a wreath on the grave of Billy Stoneman on the exact centenary of his death on 2 February 1919. He was the last of 13 known City players to die while serving in the First World War. Aidan also visited the nearby building which was the hospital where Stoneman died. 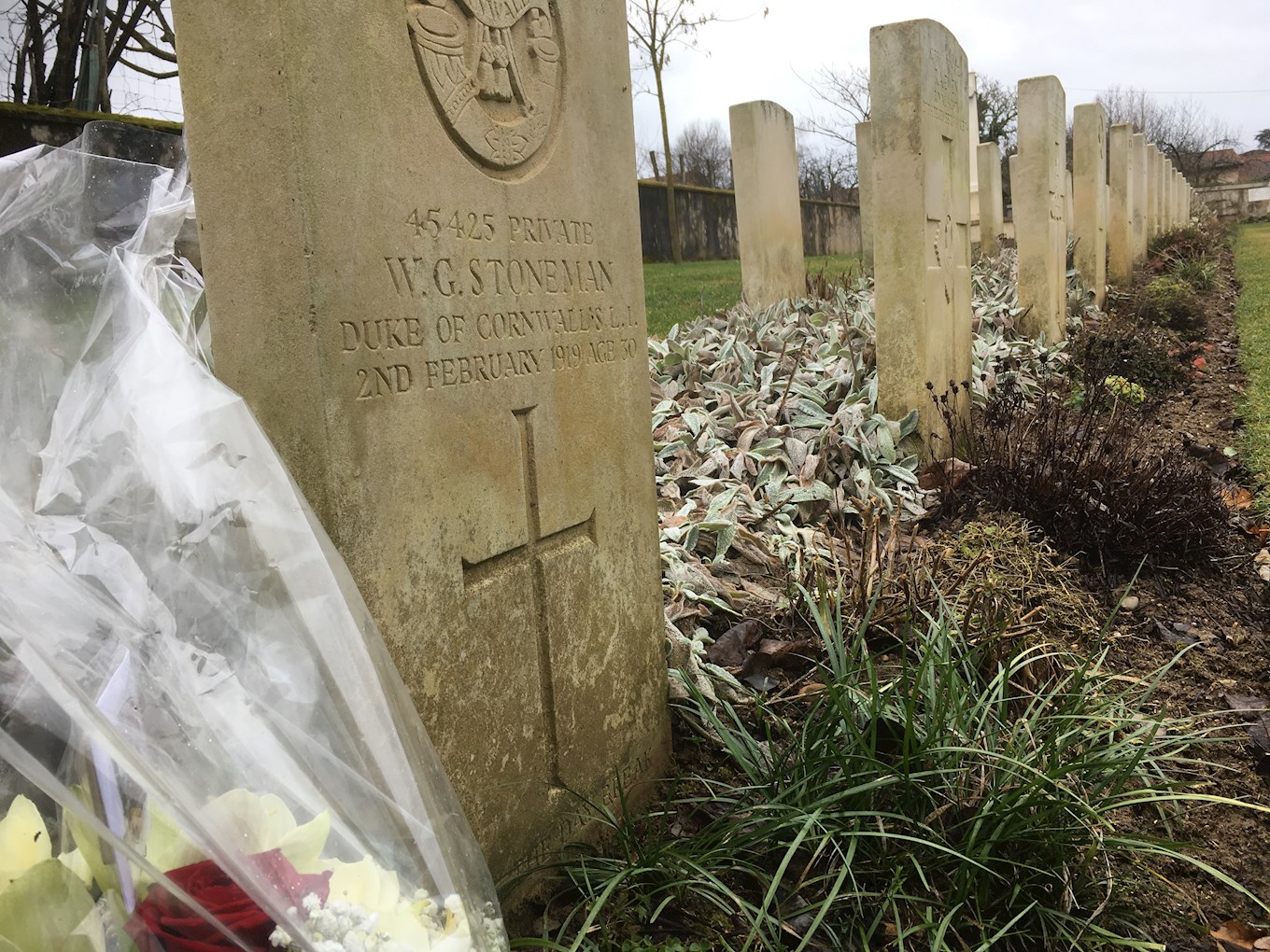