Matt Taylor is calling for a wall of red noise to hit his players when they step out onto the St James Park on Saturday to face Tranmere Rovers.

The Grecians, on the back of two tough away games at Crewe Alexandra and Lincoln City in the past seven games, head into this weekend’s fixture slightly fatigued which was not helped by the fact that they conceded a 96th-minute equaliser at Sincil Bank at the end of a superb, energetic performance against the League Two leaders.

However, that is where Matt thinks the City fans can play their part

“We are on the back of a heartbreaking moment in terms of a 96th-minute equaliser on Tuesday night, but it was two good performances against two good teams (Crewe and Lincoln) and we face another in-form team and another candidate for those play-off places at the moment. 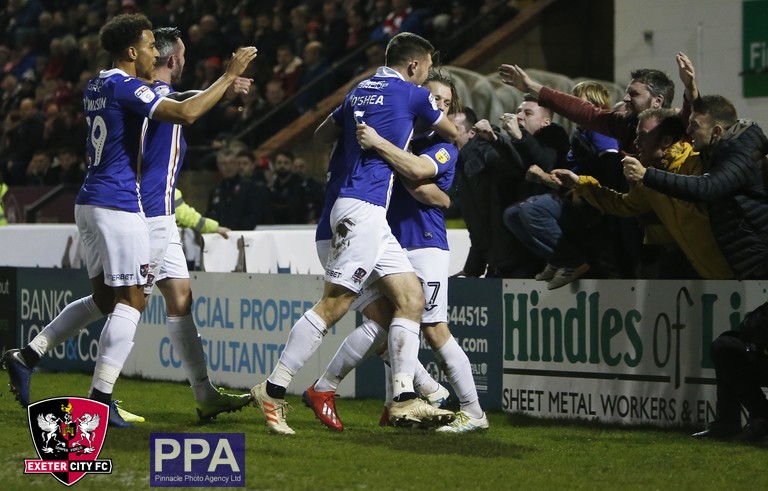 “We know what a tough task Tranmere will be at any stage of the season, but on the back of two difficult away fixtures and with the squad the way it is at the moment this is going to be a severe test for our durability, to somehow put in another performance that backs up the last two and get a result of the back of it.

“I have got to be honest with you, the lads are at a physically at a low so if there is ever a day where we need the home fans more than ever, it is this weekend.

“Hopefully, they have read or heard about our last two performances and that has given them a bit of belief in terms of this squad, but we will need them to get us going this weekend. We need all the energy we can possibly get and the fans will play a vital part for us.”

City do have many injury concerns going into the match, with those players missing from the match away at Lincoln unlikely to return. However, even with the strength in depth tested, City’s squad has managed to perform well – highlighted by the fact that the City fans that travelled to Lincoln gave them a standing ovation at the full-time whistle.

“Hopefully we are putting out a team that they (the fans) can be proud of at the moment,” said Matt. “I have got a group of players who are giving everything they possibly can for that shirt and we need the fans to do the same this weekend – like they have done the majority of this season.

“You can just sense on the back of two good away performances, against two good teams, that we are going to come home to the Park at the weekend and, there won’t be any expectation there but there will always be pressure on the home team.

“We are struggling injury-wise, we are struggling fatigue wise so we need everyone to pick each other up. I will do my best possible job in terms of the players but if they walk out on Saturday and see a red wall of noise, it is going to help them.”