Exeter City supporters are being urged to turn up to St James Park this evening as the Grecians under-23s team take on Nottingham Forest in the Premier League Cup.

City currently sit third in Group D, with three games remaining. They are just two-points off second-placed Leicester, who they drew away at last Wednesday, and need to finish in first or second to qualify for the knockout stages of the competition.

However, City’s under-23s coach Dan Green says the competition is about improving and developing their young players and the fans can play a big part in that by coming to support the team at St James Park this evening.

Asked about their chances of qualifying from the group, with two of the remaining three games at home, Dan said:  “We will take each game as it comes. Our focus is about getting better and better each game and, hopefully, that will take us where we want to get to. 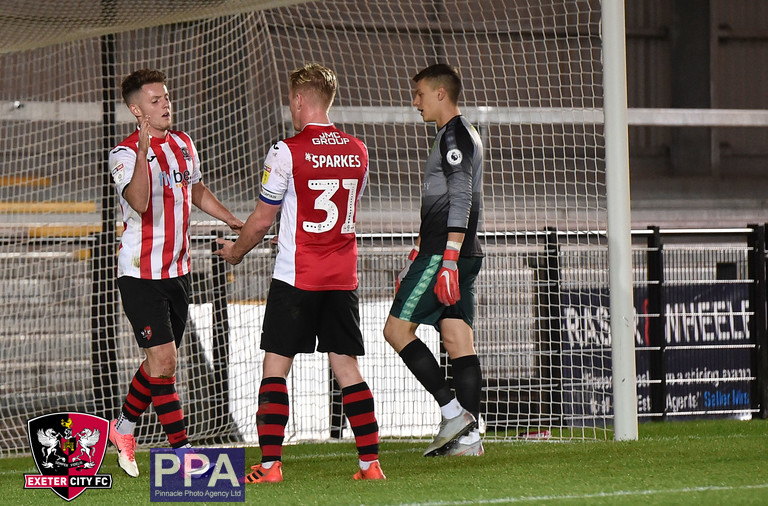 "The fans are so important to the players’ development and we really appreciate when they do turn up.

“It was the same when we played against Norwich at St James Park. To come from 1-0 down to get a draw in that match, the fans were important. It will be the same each time. The whole part of the players’ development is playing in front of the fans and learning to deal with that.”

City began their Premier League Cup campaign away at Nottingham Forest in October. It was a game where they created numerous chances but got hit on the counter-attack a number of times to fall to a 3-1 loss. However, since then the Grecians have backed that performance up with draws against both Norwich City and Leicester and Dan is pleased with how his players are progressing.

“I said to the boys that the Leicester game was a really good step forward,” he said. “We are three games into the competition now and we have probably not got the points on the board that we would have wanted but the performances have got better each game. So, it is moving in the right direction.”

Asked what the difference was between the performance away at Leicester and the previous away match against Forest, Dan added: “I thought the way the boys were disciplined when they were out of possession gave us a platform to build on.

“It was a performance that had more maturity in it and a willingness to do both sides of the game. That was encapsulated by the way the front boys went about their jobs. They terrorized them for moments in the game and really dragged us up the pitch.

“The goal came from that. It wasn’t sexy play that got Ben (Seymour) in, it was his work rate and his endeavor to turn and average ball into something good and he won a penalty of the back of it.”

The IP Office Main Stand will once again be the only stand open on the night, with individual match tickets available on the night, cash-only. Turnstiles will open at 6.15pm.