Exeter City have linked up with Exeter City Council to show support for those who serve in the armed forces.

Both have backed Exeter’s Armed Forces Covenant, recognising the fantastic job that service personnel do and acknowledging their hard work and bravery.

The Armed Forces Covenant is a promise from the nation ensuring that those who serve or who have served in the Armed Forces, and their families, are treated fairly. 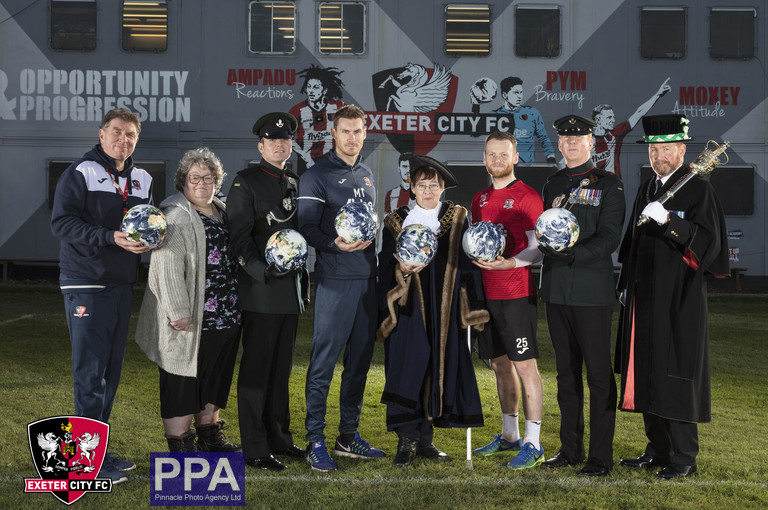 In Exeter, a number of businesses have signed up to the covenant and pledged discounts to service personnel and their families.

Exeter City and the City Council came together this week in a visual display of support for our military and to back the One World initiative, which commemorates 100 years since the First World War.

City captain Jake Taylor was able to get his hands on one of the One World footballs at the club’s Cliff Hill training ground, along with Exeter’s deputy Lord Mayor, Cllr Rachel Lyons, and 6 RIFLES Commanding Officer, Lt Col Jonathan Penhale.

The One World footballs have been created by acclaimed artist Mark Wallinger, who transformed the football into a globe of the world, taking his inspiration from the Apollo 8 lunar orbit on 24 December 1968. Captured at the moment of earthrise, it is an image of enduring beauty, depicting a peaceful planet floating in the vastness of space.

The One World project is part of the WW1 centenary Art Commissions and is inspired by the famous Christmas truce of 1914, when soldiers from both sides met in ‘No Man’s Land’ to exchange gifts and play football.

Deputy Lord Mayor, Cllr Rachel Lyons, said: “We are indebted to the Armed Forces, not only for their unwavering service to protect our country and its citizens but also for their close connection to our city.

“Six Armed Forces Regiments hold the Freedom of the City and three of those are based in very close proximity to the city.”

The Covenant recognises that life in the military differs greatly from civilian life, and marks a voluntary commitment between the civilian and Armed Forces communities in Exeter, ensuring that members if the military have fair treatment.

Lt Col Jonathan Penhale, said: “As the Commanding Officer of 6 RIFLES I am hugely grateful for the close relationship and support shown to the Armed Forces in Exeter by those who have signed the Armed Forces Covenant. 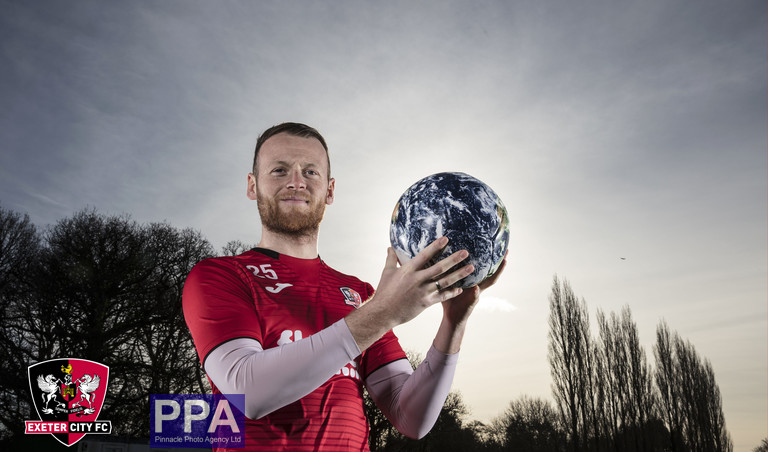 “Exeter City Council and Exeter City have pledged their support for the armed forces community, for which I am very grateful and look forward to continuing to work with both organisations to promote the AF Covenant, its aims and those of both the City Council and Football Club as they strive for promotion.”

Exeter City partner charity CITY Community Trust is also backing the initiative. The charity delivers a huge range of health and wellbeing activities across the Greater Exeter area, a number of which are designed to help and support former military personnel.

Jamie Vittles, head of community at CITY Community Trust, said: “Both the charity and the  Football Club are proud to support the Armed Forces Covenant and recognise the contribution that military personnel play in Exeter’s society.

“At CITY Community Trust we have developed a number of initiatives designed to support service veterans, including walking football and a Sporting Memories group and we continue to work hard to reach out and provide the type of support which is required.”

The City Council will be looking to give away a number of the limited edition footballs to deserving groups or individuals within the community who face some of the greatest challenges.