Exeter City defender Pierce Sweeney is expecting yet another difficult encounter when the Grecians welcome Cambridge United to St James Park this weekend.

The Grecians come up against an in-form Cambridge side who have picked up three consecutive wins and will be looking to climb further up the Sky Bet League Two table.

Ahead of the visit of Colin Calderwood’s side, Pierce said: “It will be a tough game, they’re on a nice little run and they’ve got attacking strengths and players up the top end of the pitch that will be looking to dominate. Every game in this league is tough, we keep saying every week, we have to do our job and stop their strengths for us to get the three points.

“We won against them this year we’ll be looking to take that into our mindset and then hopefully pick up the points that we need. I think at this stage it’s very tight from second to around ninth, it’s all within touching distance so every three points we can get is vital at this stage of the season. It doesn’t really matter who we’re playing, you could see that against Morecambe and Grimsby, ideally, they’re teams that we should beat on paper, but no game is easy.”

Despite the Grecians falling to defeat away at Newport County AFC last weekend, their defensive record has been positive in recent weeks with clean sheets picked up at Swindon Town and against Morecambe. 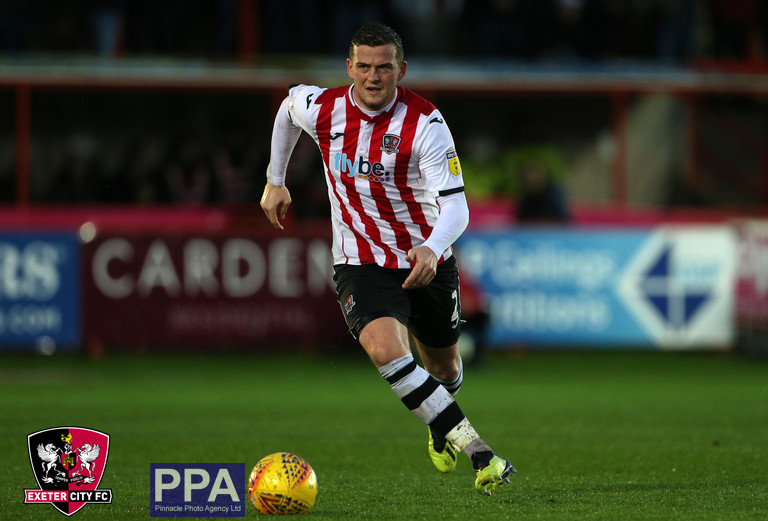 Pierce explained: “Training has been good, it’s been positive. I felt like we deserved something out of that game (v Newport) and it was a cheap goal to give away. We were defensively strong for most of the game apart from that set piece. Ryan (Bowman) smashed the bar, but it’s one game so we move on to Saturday.

“We’ve had a couple of clean sheets and we’ve looked more assured as a back five, so we’ll take the positives from recent weeks.”

Pierce also revealed that new signings Randell Williams, Jaden Brown and Ryan Bowman have settled into life well at Exeter City so far and believes all will be pushing for spots in the starting 11. The full back was also pleased to see Kane Wilson make his return to the club on loan from West Bromwich Albion.

He said: “They’ve been decent, a couple of young lads and Ryan who is a little bit older, but they’ve settled in well and they know a few of the lads already so it helps quite a bit. They will be looking to get involved in the match day squad a bit more and they look good.

“He’s a lively character (Kane.) A good lad, who was here last season. He did really well and his game flourished last year which is what he wanted to do. It’s good to have him back.”