On a cold January afternoon in South Wales Craig Woodman reached a milestone by making his 250th appearance in City colours.

It was a bit of a drab affair as the Grecians, on a difficult surface, against an uncompromising Newport County side, battled hard but an unfortunate bounce of the ball in the area saw Jamille Matt fire home from close-range strike to give Michael Flynn’s side the win.

It made sure that Craig’s achievement passed without even the hint of a celebration, but you get the feeling that there wouldn’t have been one regardless of the result. 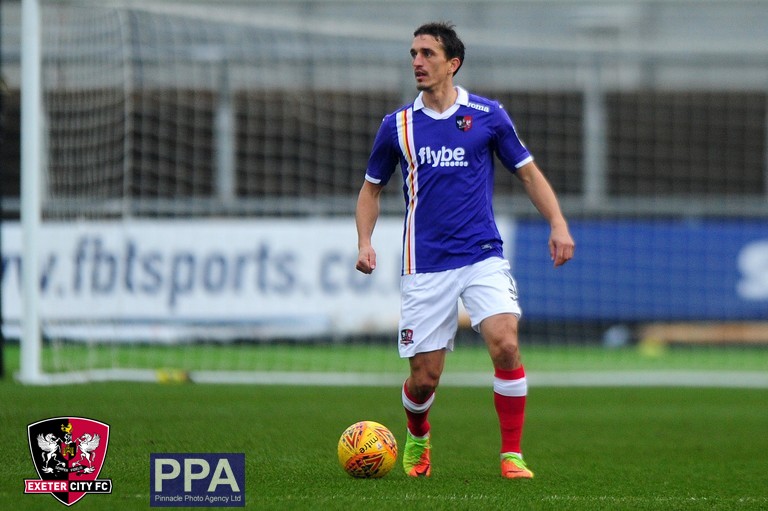 This is because in a football world gone mad in a clambering for attention – as endless Instagram and Twitter posts get liked, shared and made into news stories – Craig is a bit of an anomaly.

He has no social media presence and is about as unlikely a person to come out with a Zlatan Ibrahimovic-style quote as you could find. He is also not a player who counts the amount of competitive appearances he has made.

“I’ll leave that to you,” he smiled, when quizzed about reaching another milestone. “Before you told me, I didn’t have a clue I had reached 250.

“I think, I reached 500 appearances in total a few seasons ago but you don’t want to settle on that. I want to keep playing and see where it takes me.” 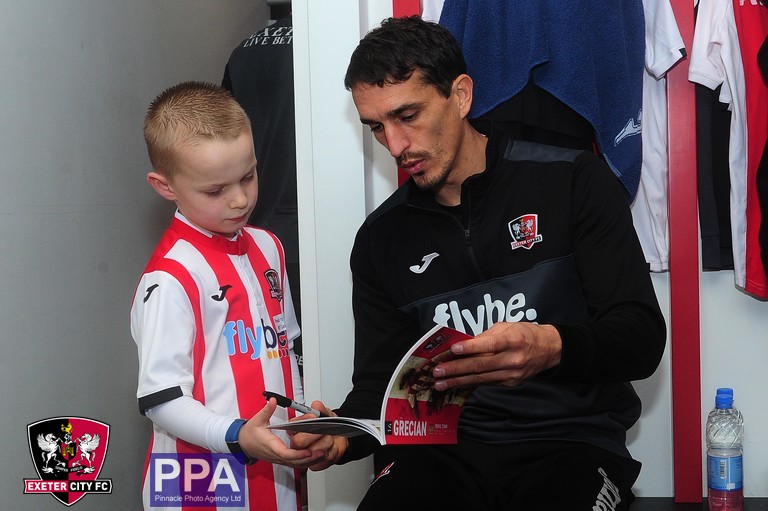 Craig signing an autograph for a young supporter

So far his time at Exeter, which stretches from August 2012 to the present day, hasn’t managed to take him back to League One which is a cause of frustration for him and the team.

However, it has been a largely successful spell for the club as they have, for the most part, battled at the top end of League Two. It has also seen some moments of magic from Craig that has thrust him into a spotlight he would probably rather not be in.

Who can forget his wonderful 40-yard pass to David Wheeler in the 2016/17 play-off final that helped set up an equalizing goal or his string of fine performance in the autumn of that same season that led then manager Paul Tisdale to compare his form to that of German defensive legend Franz Beckenbaur.

However, if you ask City fans to recall a moment from Craig’s time at the club which they look back at with most fondness, then it will be his one and only goal for Exeter, which came in his second season at St James Park. 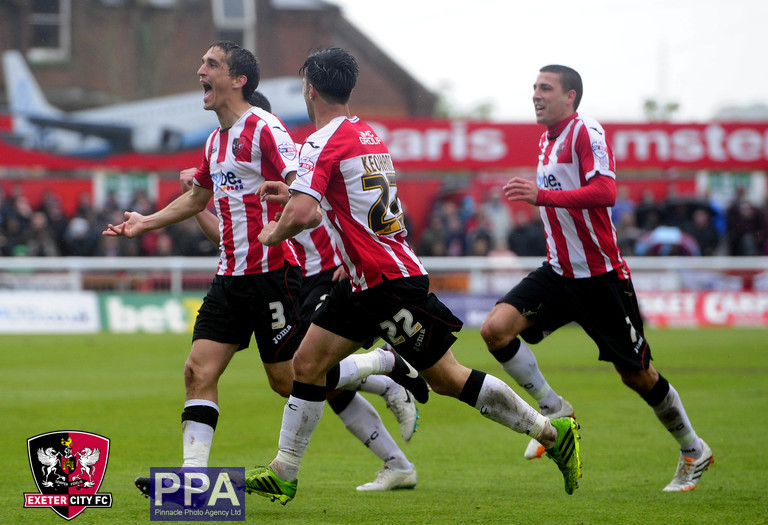 Craig celebrates his one and only goal for Exeter

Going into the penultimate game of the campaign, and needing a victory to secure City’s Football League status, Craig hit a 25-yard shot into the top corner of the net, in front of the Thatchers’ Big Bank, to give the Grecians a priceless victory against a Scunthorpe side who were 28-games unbeaten going into the match.

It is a sparkling moment and one that often gets mentioned when fans chat to Craig.

“That is the only goal I have scored, so that is the only one they can talk about I guess,” said Craig. “I probably have to score another one for them to talk about that instead. It was a nice moment, but it doesn’t matter who scores the goals really as long as we score them. And to keep us up, during that season, was an achievement in itself. It is not where we want to be though.”

No, City want to be challenging towards the top of League Two and, while his second season saw the club flirt with relegation, they have for the large part done that during Craig’s time at Exeter. His first season (2012/13) saw the Grecians narrowly miss out on a play-off spot having gone into the Easter period in the automatic promotion places and the last two seasons have seen City qualify for the League Two play-off final only to fall at the final hurdle.

“It has been nearly there, hasn’t it?” said Craig when asked to describe his time at City so far. “We have reached the play-offs twice and we just need to get to that next stage really and then I feel I would have achieved something with the club. I think that is the same with everyone here really. We are just trying to get to that next stage and then move forward hopefully.

“The last couple of years have been that little bit closer than in the previous seasons, but we have just not quite got there so to actually get there would be the achievement we are all after.” 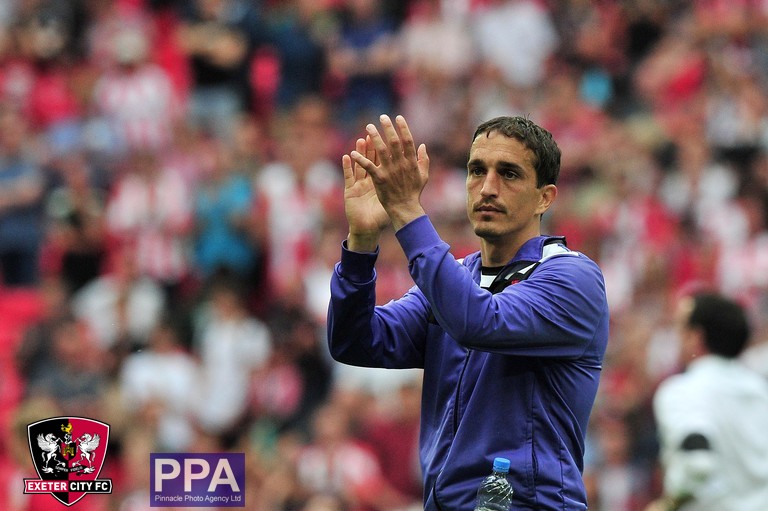 Craig applauds the City supporters after defeat at Wembley in 2017

That goal looks in reach this season as City go into today’s game two points outside the play-off places. However, with only seven points separating the Grecians with third-placed Mansfield, Craig is looking up to the automatic promotion places rather than the top seven.

“I think it will be a case of just stringing a little run together,” he said. “You will see a big difference then, because there are always two or three teams losing and one or two winning each week. So, if you can put those string of results together then you can jump up quite a bit.

“If we win three or four on the spin, then I think we will be up in the automatics. So it is about staying focused and taking each game as it comes.”

It is perhaps that strong focus on what is in front of him and a striving to aim high, rather than rest on an 18-season career, that has seen Craig continue to play regularly for City into his late 30s. Last season he made 38 appearances and this campaign he has already turned out 19 times, ably stepping into his usual left-back role vacated when another seasoned-pro in Dean Moxey started to impress in central defence.

Craig does face renewed competition for places in the coming months as four new faces, including left back Jaden Brown, have joined the club. However, he is pleased to see the additions of Ryan Bowman, Kane Wilson, Randell Williams and Jaden as is looking forward to passing on any knowledge to them should they come and ask. 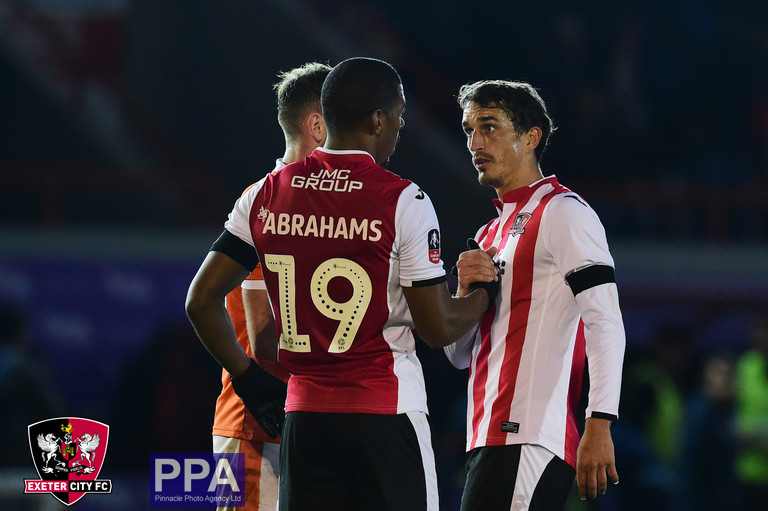 “I am always there if they want to ask me any questions or see what I think about things,” he said. “I am there to support them and they are all attacking players coming in. Even though Jaden is a left back, he looks very attacking. I think the manager is keen to keep driving us forward and to take the game to the opposition.”

One of the new signings, Kane Wilson, has already benefitted from Craig’s experience having been on loan at City last season. The young West Brom right-back even name-checked Craig as a player he learnt a lot from in his last spell at the club.

“He is a bubbly character,” said Craig. “He has always got a spring in his step and he is a danger when he is on the ball, so hopefully we can get him on the ball in attacking areas and see what he can produce for us.”

So as well as teaching the young players coming in, Craig also as a senior pro sets an example for the others to follow, which has also helped him to continue his playing days at the club.

“I just try and do things right really,” he said. “You have got to be professional as you can be and if that sets the standard for everybody else then I am happy to do that." 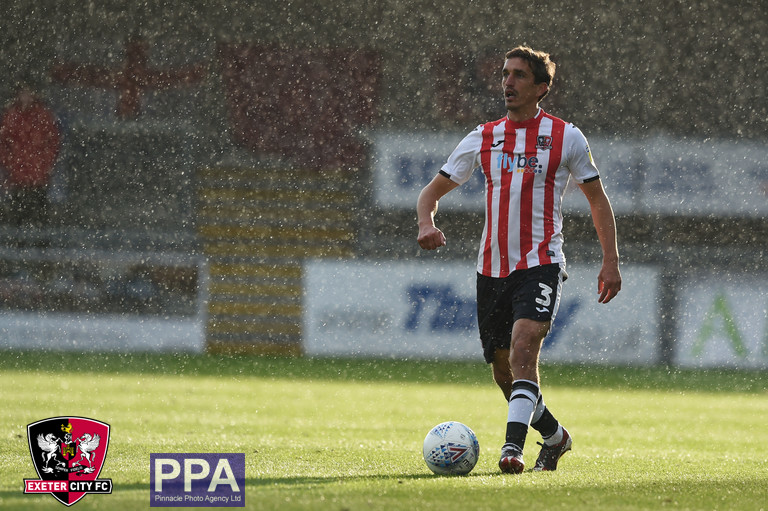 “The older I get, means I am looking after my body more,” he added. “That is a bit of extra gym work and we are bringing a few in with us – doing our little sessions after training.

“However, I think there is a lot of luck along the way and a lot of people are unlucky with injuries as well because a lot of injuries mean that you are out for three or four weeks which is a big part of the season. So to avoid any injuries you have got to be doing things reasonably good with everything.”

Craig has also never been suspended for a game during his time at City and only has one red card to his name, picked up at Wycombe for a last man foul during a 4-4 draw with Brighton in November 2009.

“I am not sure it was a straight red,” explained Craig. “I think I was nearly the last man and it was a good dive and he got me sent-off. It is just the one red card though. I have done well I guess not to receive too many more.

“This day and age cards are flying around everywhere so it would have been nice not to have had that sending off but it happened and it is part and parcel of the game now.

“I guess, over the years, I have been slightly lucky with some decisions and slightly unlucky with others. It depends on the official on the day really.”

So whether it is avoiding the attentions of the referee or avoiding the media, Craig has managed to quietly chalk up an impressive 604 competitive games in the Football League and 250 matches for City.

And, if City, do manage to achieve his and the club’s goal this season of making it back to League One the spotlight will be thrust back on the club just as it has been the past two play-off campaigns. You get the feeling though Craig will be happily stood just off to one side as someone else shimmers in the brightness.