Matt Taylor says Nicky Ajose is the centre forward the club has been looking for after signing the former Swindon Town and Charlton Athletic striker.

Nicky, who has been a prolific goalscorer at League One level, joins the club having helped get Charlton Athletic promoted to the Championship last season as well as helped Mansfield Town to the League Two play-offs following a spell on loan at Field Mill.

“I am, obviously, very pleased,” said Matt Taylor. “I have been working on it a while now. He is the profile of the centre forward we have been looking for a number of weeks, if not a number of months, at this football club.

“I am delighted it is done and secured and, hopefully, he can get down to some hard work over the next couple of weeks and bed into the team. We have got to supply him with a good service and that is up to myself, my coaching staff and the rest of the group to do that. I am sure that if we do that, he will score goals.”

Matt thanked the Exeter City board for backing him with the transfer, with a couple of League One clubs also interested in signing the striker.

“He will be honest enough to work hard, in and out of possession, but he will be judged on that goalscoring record. We are not going to put a whole load of pressure on him. I hope he enjoys his time here and really buys into what we are trying to do. We have got a good group of people, good group of players and we have been backed strongly by the board. I am grateful for that and now it is about that opportunity to put a good team on the pitch.” 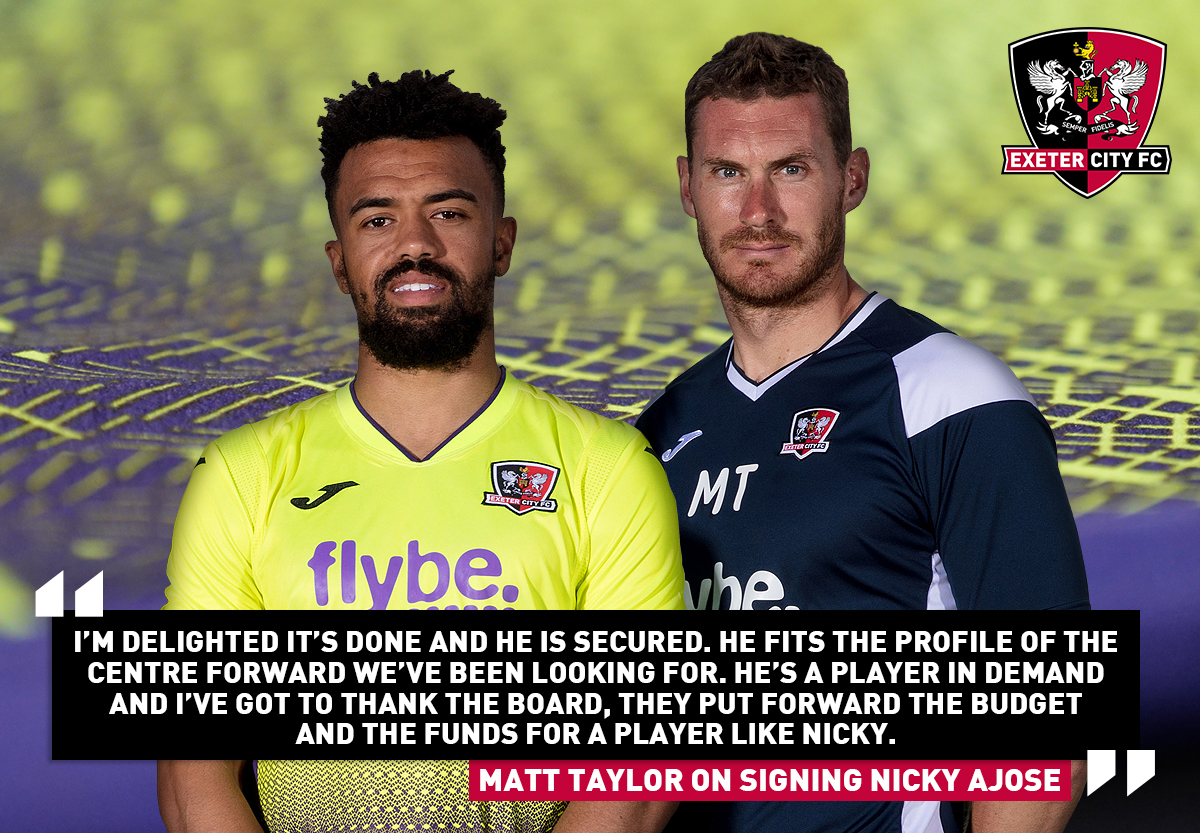 Matt, who had a playing spell at Nicky’s former club Charlton during his career, says the player also comes with good character references from the Valley and will complement the strikers City already have at the club.

“He is a goalscorer,” said Matt. “He has scored goals throughout his career. He has had a lot of clubs in recent seasons and probably never felt settled at a certain club. Hopefully, we can provide a home for Nicky and he can really feel comfortable in this environment and play some of his best football.

“We know if we get him at his best then he will be successful for us and will add another dynamic to our frontline. He will complement the likes of Ryan Bowman and Alex Fisher really well and we have got the likes of Ben Seymour and Matt Jay who are similar types of player to Nicky as well.”

“He is a good character,” added Matt. “I know some of the lads at Charlton pretty well so they have given him a reference. I have followed his career. He has been in the game a long time, despite being still relatively young. It will be an interesting time for him. He is a long way from home being a Manchester lad, but some of our lads are from the north west, myself included. It (Exeter) is a great area to live in and a great club to be at and, hopefully, we can provide a real home for Nicky and somewhere where he can enjoy his football.”