Exeter City will be looking to continue their positive run away from home when they make the trip to Northampton Town in Sky Bet League Two in a 2pm kick-off.

The Grecians haven’t been beaten since January on the road, which was a narrow loss at Newport County. Since then City have picked up draws at promotion rivals Carlisle United and Lincoln City and a win over Crewe Alexandra.

Ahead of the match, manager Matt Taylor said: “They’ve (Northampton) got some good players, a team that we watched a lot at the start of the season, and they were underachieving because they have some seriously good players in that squad.

“They’re hitting form at the right time and the manager has got them going, so they’re a good team, a strong team and a physical team who will put a lot of balls into our box. We’re going to have to defend but play our way, and the Exeter City way, and try to hurt the opposition at every opportunity."

The sides last met back in November where they played out a 2-2 draw at St James Park. Jake Taylor found the net on 14 minutes before Billy Waters levelled things. The Grecians took the lead through Jayden Stockley once again just before half-time and as the game hit 90 minutes the Grecians were dealt a blow when a Stockley own goal gave Keith Curle’s side a point in Devon. 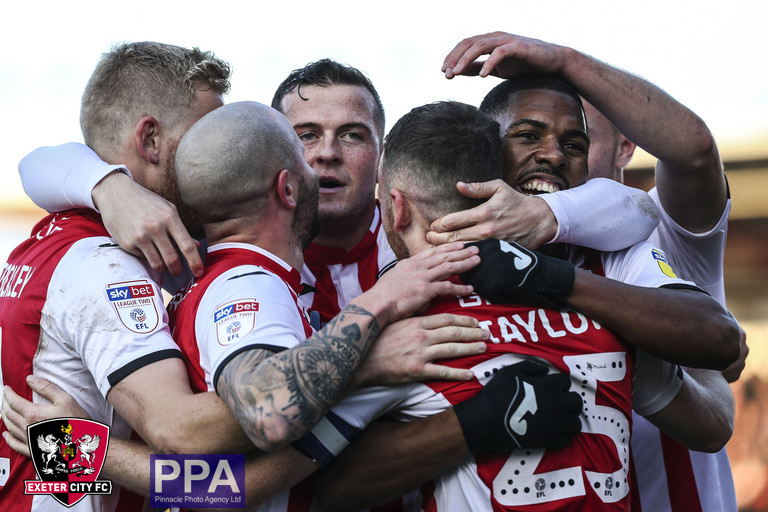 The initial allocation awarded to Exeter City has already sold out for the trip to the PTS Academy Stadium therefore you are unable to make a purchase in advance of the match. Tickets will still be available on the day of the game; however, they are subject to a £2 increase in price.

The supporters’ coach departs at 7.30am from Unit 1 nightclub for a fare of £30. Pick-up Points are as follows: Unit 1 nightclub (Summerland Street), Honiton Road Park & Ride (by Miller and Carter steakhouse), Cullompton Services (junction 28), Tiverton (junction 27), Taunton (junction 25), any other pick-ups en-route by prior arrangement.

To avoid a number of changes, perhaps the best train to take on the day of the match is the 08:23 train from Exeter St David’s. This train travels to Birmingham New Street before you have to change to complete your journey to Northampton. This will get you into Northampton for 12:20. Later trains will require you to change in London and use the London Underground service to get from London Paddington to London Euston station. Some routes can also require another change at Milton Keynes Central. You can take the same route (via Birmingham New Street) back to Exeter at 16:25 and 17:25 which should get you back prior to 22:00 on the day of the match. The train station is 1.6 miles from the stadium which is just over a 30-minute walk. Otherwise, a taxi may be necessary to complete the journey.