A waterlogged pitch in Exeter City’s midweek fixture at Macclesfield Town meant the game had to be postponed and the Grecians lost a bit of ground on their promotion rivals in dropping to 9th place.

Next up is a game against one of those very rivals, as they welcome Colchester United to St James Park who come off the back of a 3-0 defeat to Forest Green Rovers, but still sit two places and two points above the Grecians.

Here is everything you need to know about Colchester:

The dominant club in the town was in fact Colchester Town, but their opposition to turning professional resulted in the formation of Colchester United in 1937 and came to usurp Colchester Town by signing several players from them.

A deep FA Cup run in 1948, when the U’s reached the fifth round would be the making of them, as they were swiftly elected to the Football League in 1950.

Following Colchester’s introduction to the Football League, they became the yo-yo club of the next three decades, as they continued to flit between the Third Division and Fourth Division.

After a few seasons in non-league football, the U’s returned with aplomb after winning the Conference in 1992 and their first piece of major silverware.

The ensuing years representing some of the most successful in the club’s history as they won the Third Division play-off final in 1998 and then finished second and gained automatic promotion to the Championship in 2006 – the first time in their history. They would only stay in the division for two seasons.

John McGreal has plenty of pedigree at Colchester having worked his way up through the youth teams, before finding himself as the number one man at the club.

The former defender was a combative centre-back in his hey-day, playing for Tranmere Rovers, Burnley, but most significantly, Colchester’s fiercest rivals in Ipswich Town where he led the club to the promised land of the Premier League in 2000.

Since hanging up his boots, McGreal has been a one club man though and has gone on to consolidate Colchester’s place in League Two, while also pushing on for promotion this season.

The U’s originally took up residence at Layer Road after the club’s foundation in 1937, which was used to host former incumbents Colchester Town before they folded the same year.

Colchester reached a record attendance of 19,402 at that ground in 1948, though the match was subsequently abandoned due to the fog.

Due to financial difficulties in the 1980s and early 90s, the stadium was sold to Colchester Borough Council for £1.2 million, as the club sought a new stadium.

In 2008 that goal was finally realised, as the club opened the new Colchester Community Stadium. The highest-ever attendance at the ground came in 2010, as 10,064 packed in to watch Colchester’s humiliating 5-0 defeat to local rivals Norwich City.

Matt Taylor’s men know all about Sammie Szmodics, after the midfielder’s sensational in the reverse fixture earlier in the season, which ended 1-1. 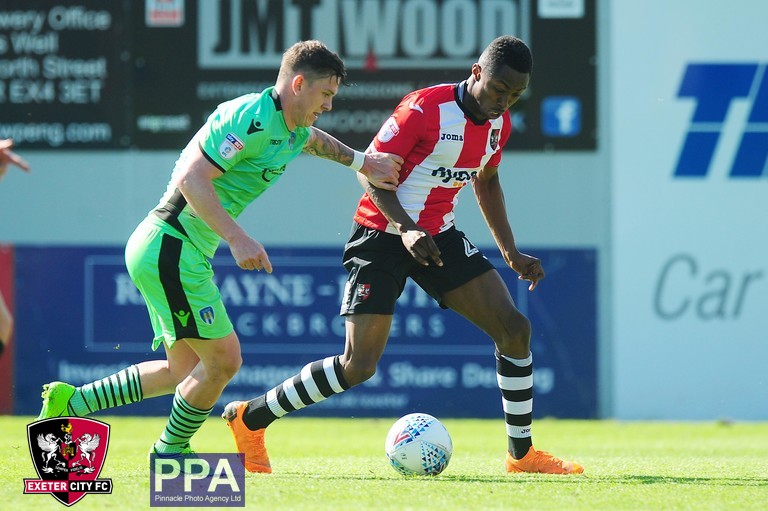 The 23 year-old has become a talismanic figure for the U’s this season with twelve goals to his name and five assists too.

Exeter’s rearguard will have to be wary of the diminutive number ten, who is capable of turning a game on its head all on his own.

Colchester’s recent run of form has been very topsy-turvy of late, as the teams’ assault on promotion continues to stutter.

In their last six games, the U’s have two wins, two draws and two losses. More strikingly is the manner of those victories and defeats, which have all been 3-0 scorelines – the latest culminating in a heavy 3-0 drubbing at home to Forest Green Rovers.

Given their inconsistent form, it’s a mystery to Taylor in what Colchester might show up. 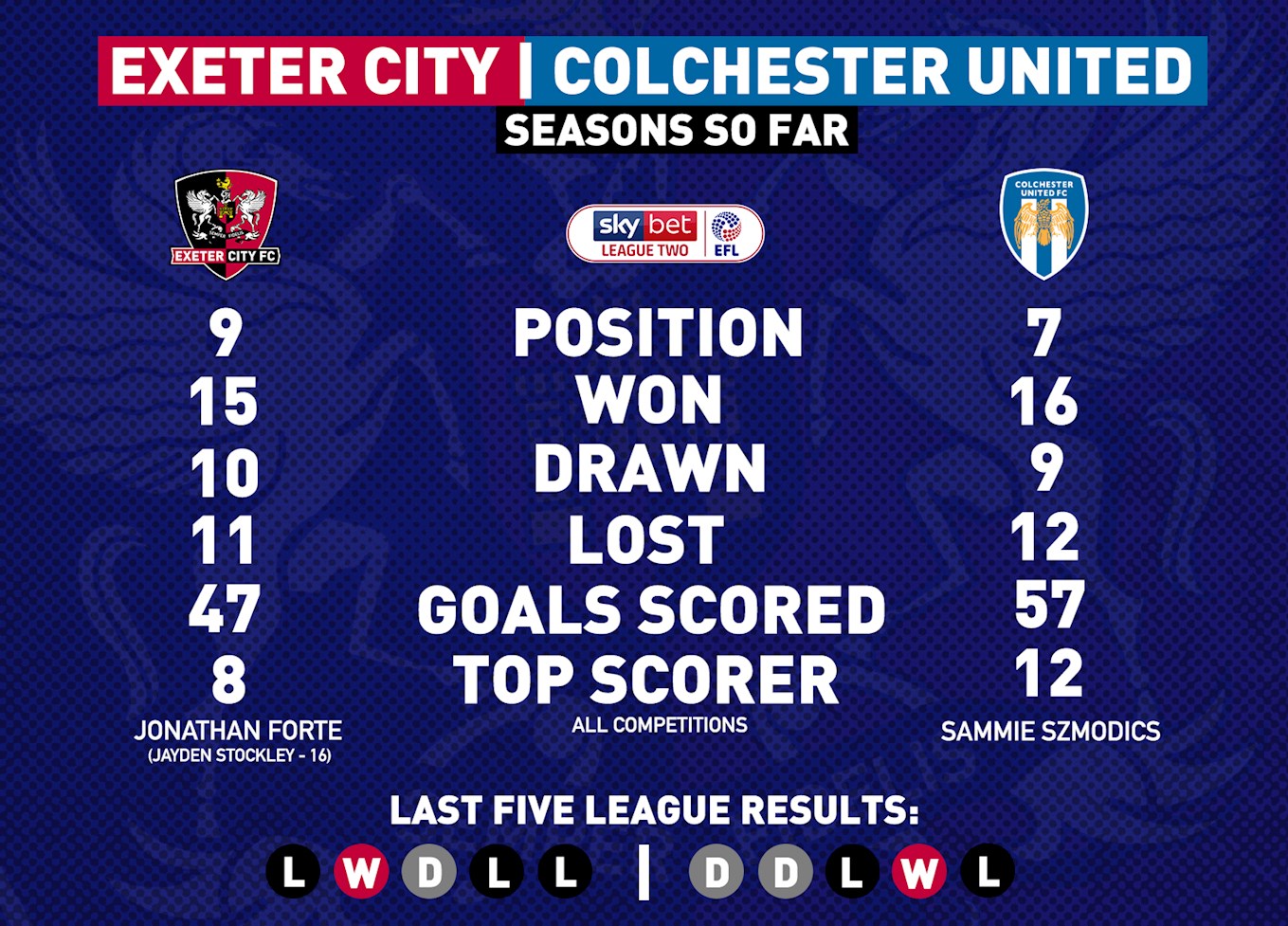 A nightmare start to the season of two defeats and a draw in Colchester’s opening three games had the club precariously sitting second from bottom, but the U’s bounced back in style by thrashing Forest Green 5-1.

That win failed to spark an upturn in form and come the end of September, McGreal’s men were still staring at the prospect of relegation.

The following three months and the U’s outlook was in stark contrast. Eight wins, four draws and just two defeats in that intervening period had transformed the team into promotion aspirants instead of relegation candidates.

While, a noticeable drop-off from the play-offs transpired, their relegation fears were completely allayed, as some patchy form meant the side simply meddled around midtable and ultimately finished 13th.

Sammie Szmodics was the villain for Exeter City as his stunning strike meant just a point for the Grecians, as the intensely-contested promotion battle continued to heat up.

Robbie Simpson scored the only goal of the game in the final game of the season, as Exeter confirmed a play-off double-date with Lincoln City, after the Grecians finished fourth.

Colchester had to settle for 13th place and a season of consolidation, after staving off the threat of relegation at the beginning of the league campaign.

A first-half blitz from Colchester and Szmodics saw the hosts race into a 3-0 lead at the interval, courtesy of the midfielder’s hat-trick within the space of just seven minutes.

Stockley pulled one back on the 62nd minute, but a fightback failed to materialise, as the Grecians suffered a setback in their bid for automatic promotion.

Tickets are on sale at advance prices until 5pm in person and midnight online, on Friday, March 15 so, why not save money and time queuing by buying in advance!