Exeter City go in to their final game of the season, away to Forest Green Rovers, knowing victory is a near requirement for them to secure seventh place and the final play-off berth.

The Grecians edged out Oldham 1-0 last weekend to boost their promotion prospects, but Newport County leapfrogged them into seventh during midweek, courtesy of their 2-0 victory against the same side.

Exeter go to New Lawn with their fifth-placed opponents looking to secure fourth-place themselves, with third-place and automatic promotion seemingly out of reach due to goal difference.

Here’s everything you need to know about Forest Green…

The club were founded in 1889, becoming founder members of the Mid Gloucestershire League just five years later. The Rovers would become synonymous with local and county league footballer where they plied their trade for much of the 20th century.

Forest Green started to pave their way at the top rung of non-league football after back-to-back promotions from the Southern League Southern Division in 1997 and then the Southern Premier a year later.

It took nearly two decades for the club to make the final step to league football when they beat Tranmere Rovers 3-1 in the National League play-off final in 2017.

The St James Park faithful know all about Mark Cooper, a former Grecian who had two separate spells at the club from 1989-91 and 1994-96. Cooper’s vast experience during his playing days has been replicated into his managerial career where he is into his 14th season in management.

The 50-year-old took charge at New Lawn in 2016 and enjoyed instant success by writing himself into Rovers’ history books, by guiding the club to the Football League for the first time ever and now he continues to lead the charge as he aims for promotion to League One this season.

Cooper has managed eight different clubs including Swindon Town and Peterborough United and also turned out for several clubs during his playing days, such as Birmingham City, Fulham and the team he currently manages.

With the New Lawn opening in 2006, the club continued an age-old tradition dating back to the 1950s, of the supporters painting the ground. It was built 400 metres away from the previous ground, being built to meet Football League standards.

Despite his tender years, Reece Brown has turned into an integral player for Forest Green after joining the club from Birmingham in 2017, going on to make over 70 appearances for the club. 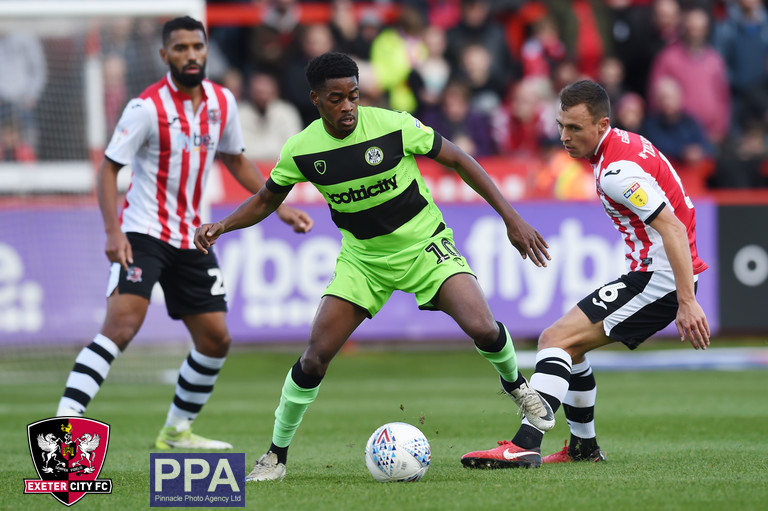 The skilful creative midfielder who is equally adept in central midfield, as he is playing off the striker, has scored 11 goals and laid on another 12 goals this season, demonstrating his ability as a deadly marksman and creative lynchpin.

Prior to that, Cooper’s men had won every match in April, starting with a 2-1 away win against Crawley Town, a 2-0 home victory against Macclesfield Town, a 1-0 win at promotion rivals Tranmere Town and a 2-1 win against Cambridge United.

All these victories served to haul Rovers back into automatic promotion contention after a woeful February that looked to jeopardise the promotion prospects completely.

With 5-1 and 3-0 thrashings at the hands of Colchester United and Cambridge within the first two months of the season, Forest Green were given a rude awakening upon entering the Football League for the first time in their history.

Those chastening defeats were not the only drubbings served out to Rovers as they lost 3-1 to Wycombe Wanderers and the Grecians within their first ten league fixtures. By mid-October and the 13th gameweek, Cooper’s side had just the solitary win to their name and sat in 23rd position.

The also faced the Grecians in the FA Cup second round, putting in a valiant effort, before eventually succumbing to the Devonshire side in added extra-time at St James Park.

Rovers were able to stead the ship in 2018 as they won two games in January and exacted revenge on Cambridge by thrashing them 5-2. A near perfect February follows as Rovers won three of their four games and ultimately this proved sufficient for the club to avoid the drop by just one point.

Forest Green honed in on the Grecians after beating them 2-1 on their own patch and moving to within two points of the hosts.

After a goalless first half, Rovers took the initiative with Reece Brown curling a delicious effort beyond the keeper shortly after the interval and Liam Shephard doubled the scoreline with 20 minutes left to play. Aaron Martin pulled back a consolation for Exeter, but this proved to be in vain.

The win moved the Grecians up to fourth, while Rovers will languish in 23rd place and the relegation zone.

Not for the first time, Jayden Stockley was Exeter’s hero after bagging the winning goal in the 115th minute, to set up an exciting third round tie with West Bromwich Albion.

Rovers struck the first blow of the night, after Doidge converted a 30th minute penalty, before Sweeney drew the sides level from the spot-kick in the 73rd minute. Stockley then struck the fatal blow dep into extra-time.

Exeter set up a second round FA Cup replay following a pulsating 3-3 draw at New Lawn that ebbed and flowed either way for much of the contest.

Doidge opened the scoring in the first half, before Jordan Moore-Taylor drew the sides level in the second-half. Stockley looked to settle the tie, scoring just six minutes after Moore-Taylor, but late Forest goals from Scott Laird and Doidge’s second swayed the content in their favour.

Unfortunately for the hosts, Stockley got his second of the game in the 94th minute and would go on to be the thorn in Forest’s side in the replay at St James Park.

Our allocation of tickets is SOLD OUT for Saturday's match, thank you for your support!