The Grecians sit top of group M of the competition with two wins from two, and Matt stressed that the team are looking to finish the group stage in good form.

City face a West Ham United under-21 team that have been involved in some interesting scorelines in their two games so far. First up they beat Newport County 5-4 after being 4-1 down, they then were beaten 4-3 by Cheltenham Town. Matt is hoping that the scoreline favours the Grecians at the full-time whistle on Wednesday night.

He said: “I saw a bit of the Newport game and was interested by the scoreline. Let’s hope there are a lot of goals but not too many in our end.”

City faced West Ham United under-21s in the competition last season and took all three points in a 2-0 win thanks to a brace from Jonathan Forte, this season they could be somewhat of an unknown quantity, but Matt feels that this could be a benefit, he said:

"Sometimes that can work out better I think, because we can focus on ourselves Obviously, we don’t know a huge amount about them, but we will do our work today and tomorrow and look to see what they try to do, but it will be all about us on Wednesday." 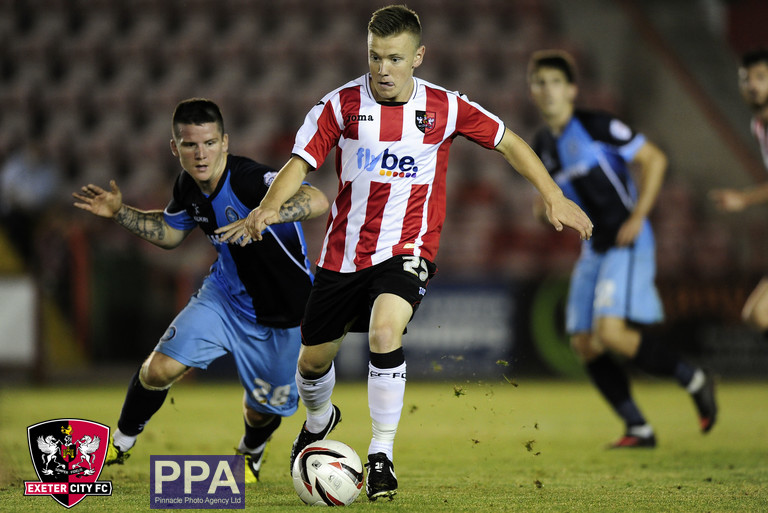 The Leasing.com Trophy is special to Matt, he made his Exeter City debut in the competition as a seventeen-year-old when it was the Johnstone's Paint Trophy against Wycombe Wanderers back in 2013. Matt added: "I think for whatever reason it’s not always seen as the best competition for the fans, but it’s a great one for the players.

"If you are a young player coming through it’s something that we all look forward to and a chance to get some minutes on the pitch."

The incentive of the Leasing.com Trophy is that the final is played at Wembley Stadium and Matt is keen that the Grecians go as far as they possibly can in the competition, he said: "We want to go as far as we can, and everyone wants as many games as possible, especially with as good a squad as we have."

Matt has been playing in more of a midfield role this season and he sees that as something which suits his playing style but he is aware of the competition for places in midfield. He said: "I think the role suits me more. I like to be in and around the action and put my foot in when I can and when it’s a bit hectic in there to try and control and settle things down.

"I feel really good and feel that I’ve done well so far but I need to keep my head down and keep working hard.

As a graduate of the Exeter City academy, Matt was delighted to see fellow graduate Archie Collins skipper the side on Saturday at the tender age of twenty. He added: “I thought Archie did really well, he has played a lot of games for such a young age and it’s fully deserved. I was very happy for him."