Exeter City received a strong amount of applications to lay a wreath on Saturday on behalf of Exeter City Fans at our post-Armistice 'Remember Together' match.

Club director Elaine Davis was keen to thank those who took the time to apply, but were unsuccessful and wanted to share their stories for applying, she said: "Thank you for offering this opportunity to our supporters once again. Reading their various reasons made me well up - It was difficult to choose, so we want to thank those who were unsucessful.”

City fan Martin still plays his part today and can be seen below staffing the Royal British Legion stand in Honiton. 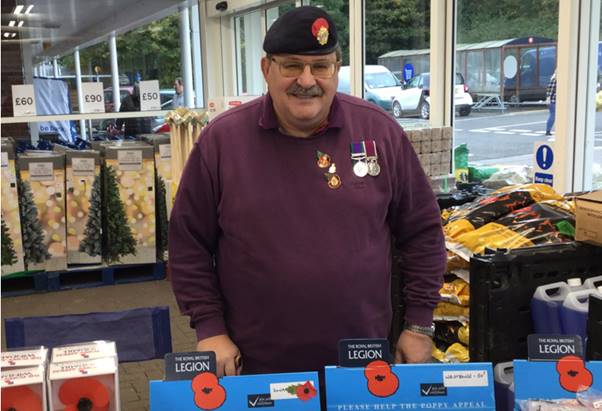 Martin served in the British Army from 1972-1996, he said, "It would be fitting and an honour to lay a poppy wreath on behalf of the city supporters who have served in the armed forces past and present.”

Another supporter, Jack, explained his reason to lay the wreath at St James Park because: "We wouldn’t be where we are today if it hadn’t of been to those that gave up their lives fighting for our future we live in today. It’s time that we repay those that have lost their lives by showing our love and gratitude by laying a wreath in their honour."

Ian, a supporter for over 30 years, a Trust member and season ticket holder wrote: "My Great Gran volunteered for 60 years selling poppies and this would be a lovely way to remember her and support our special club.”

One supporter James would have liked to lay the wreath as his father had a 22 year career in the Army and recently passed away. He said: "He always proudly took his place in Northernhay gardens on remembrance day even when confined to a wheelchair last year. It as a tribute to him and all that have served our country.”

Pat wanted to lay the wreath in memory of my dad, who served in the Navy. And to remember all of those that died fighting for our country.

Darren expressed: "It would be an honour to show respect towards our armed forces in front of supporters of both teams.”

And finally Paul, a Royal British Legion member from Dorset, encapsulated everything recognising: "A rare opportunity to combine being a life-long Exeter City supporter with that of 33+ years previously served in the Royal Air Force. Including responsibility for and flying with HM The Queen.”

You can find out about the two chosen supporters here.