Exeter City manager Matt Taylor has called on his players to be tough when they travel to West Yorkshire to take on Bradford City on Saturday.

The Grecians go into the game on the back of a 4-0 home win over Plymouth Argyle, but a trip to Valley Parade offers a different challenge to the one they faced last weekend.

Yes, the pressure of another big game will be there, but they will also be playing away, in front of a crowd of around 15,000, against a side that are only two points behind them with a game in hand.

“We are going to have to be tough when we have got to be tough,” said Matt Taylor, who turned out for Bradford towards the end of his playing career. “You go anywhere up north and you have got to roll your selves up and be ready for a physical battle as much as anything else, but on a good pitch, in a good stadium and hopefully on a good day for football. It will be two good football teams in the division going at it.”

Asked if a quick start against Bradford on Saturday would help in silencing the home crowd, Matt added: “To a certain extent yes, but you can only control what you can control and that is what you do on the ball and how our shape and structure is out of possession.

“They are really well supported. I think they have got one of the highest season ticket sales in the country and rightly so.

“They are passionate, noisy fans and in a big stadium as well so it will be a good experience for some of our players who haven’t played there before.

“If they get on a run of form and get some momentum behind them then Bradford are going to be a tough team to stop, but we go into the match on a bit of form in terms of the result we got against Plymouth.

“We have got to try and recreate that sort of performance. Take the result aside – that was a really good performance on Saturday from start to finish and if we do that at Bradford then it will be a hell of a game.” 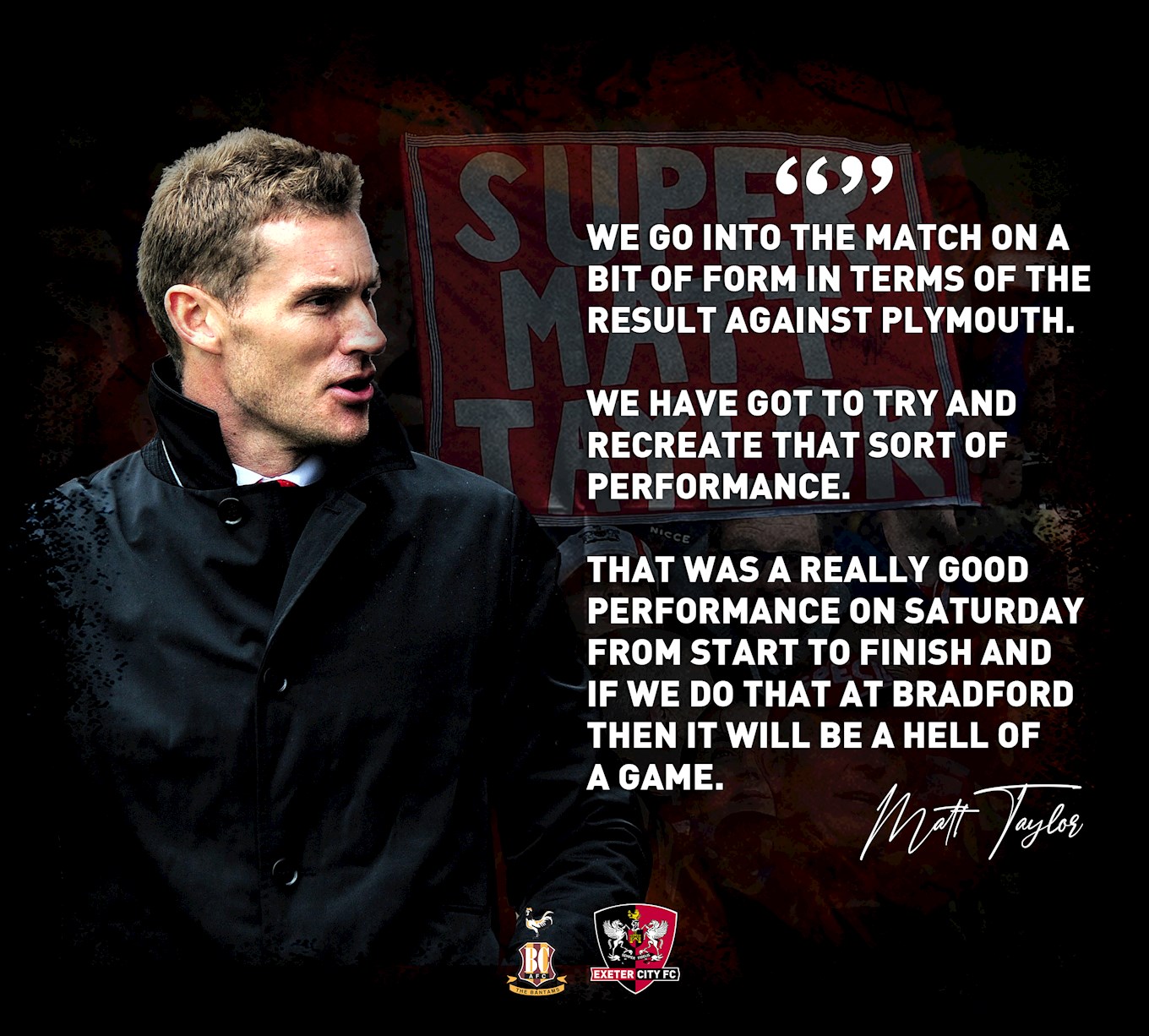 It was a good performance and good result on Saturday against Plymouth – the first time City have beaten their local rivals 4-0 since Christmas Day 1925. Of course, there is always the danger that having picked up a good win last weekend it is a case of ‘after the Lord Mayor’s show’ in the game that follows. However, Matt says the focus of his staff and the players' efforts this week have taken the necessary steps to prevent that from happening.

“The players rightly enjoyed Saturday, as did the supporters, but as staff our attention quickly shifted to Bradford and we have had a good week’s training,” he said. “We have kept it pretty simple, kept the lads working hard, trying to keep them as honest as we can in terms of their attitude to working and we go to Bradford. If we felt Plymouth was a big game, then Bradford is as big of a game.

“Previous form, does that play too big a part? Football is a strange game and you can’t delve into that stuff too much or too soon.

“It is the way you start the game and I thought we started well against Plymouth and then grew in confidence as the game went on. Away from home you have got to be structured and simple, but also effective. You spoke about silencing the crowd and you will only do that by scoring goals and threatening the opposition goal, but we can only control what we can control and that is ourselves.”