Exeter City make the relatively short trip to south Wales to take on Newport County at Rodney Parade in the Leasing.com Trophy on Tuesday, October 8 (7:45pm).

The match is the second of the group stage of the Leasing.com Trophy and City will be looking to build on their opening match, a 1-0 win over Cheltenham Town.

Ahead of the match, defender Pierce Sweeney said: "The Leasing.com Trophy is good for the younger boys and those around the squad to get game time.

"We play decent clubs. We are going back to Newport which isn't an easy place to go and will be more like a league two game, so will be beneficial for the boys coming through."

Exeter City kicked-off their Leasing.com Trophy campaign with a 1-0 win over Cheltenham Town at St James Park on September 3 thanks to Nicky Ajose's early strike.

Newport County's first match of the competition saw them play out a 4-5 defeat to West Ham under-21s at Rodney Parade on September 4. The Exiles were 4-1 up a half-time but the young West Ham side stormed back to take the three points.

The sides last met just a few weeks ago as the Grecians picked up a 1-1 draw against Newport County at Rodney Parade in Sky Bet League Two.

Despite going ahead after 15 minutes through Lee Martin, City were pegged back by a Tristan Abrahams penalty in the second period and battled to take a point away from south Wales.

Tickets are on sale for City's Leasing.com Trophy match against Newport County AFC at Rodney Parade on Tuesday, October 8.

Tickets can be purchased in advance by clicking here or by visiting the club shop until 4pm on Monday, October 7.

*under-6 must be accompanied by a full paying adult.

The coach will depart from Unit 1 nightclub at 4pm for a fare of £20.

Unable to make it to Rodney Parade on Tuesday night as City take on Newport County in the Leasing.com Trophy? Don't worry! We've got you covered! 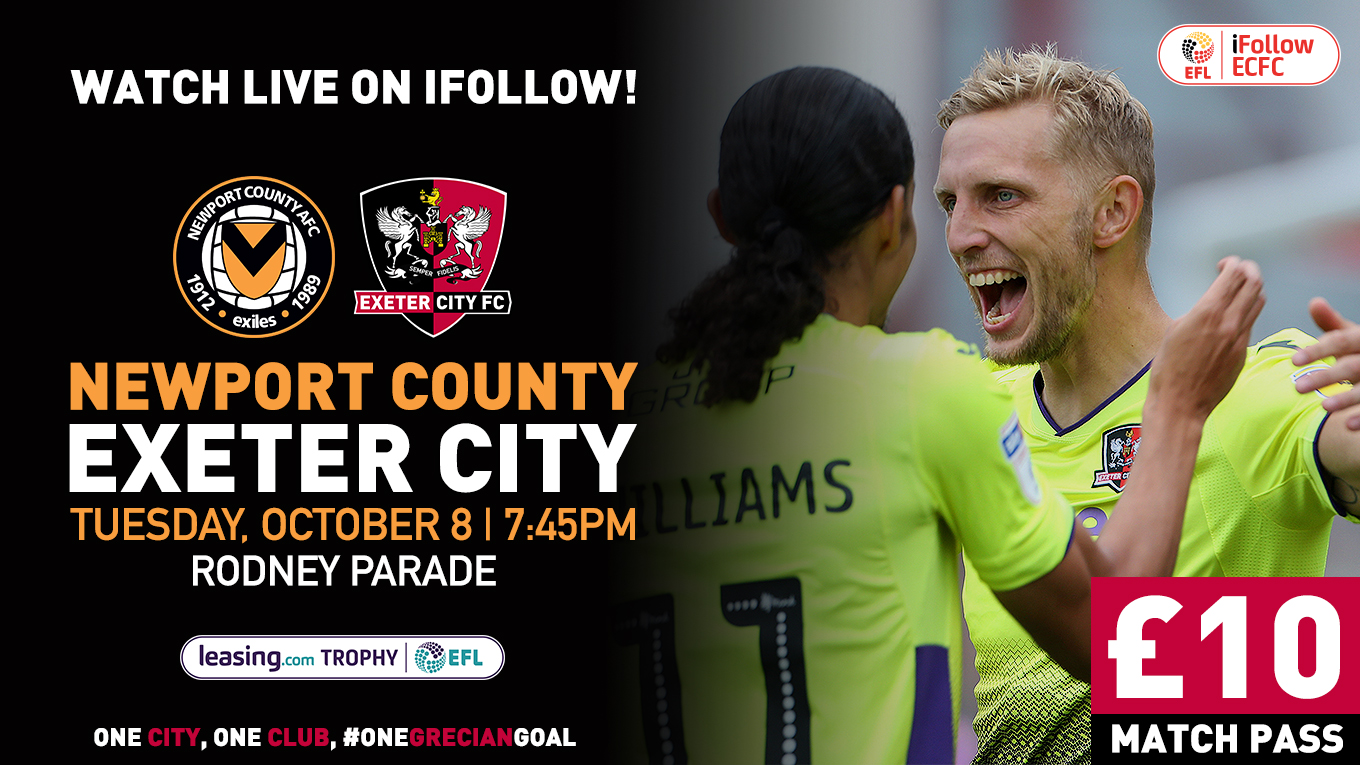 You can purchase a match pass on iFollow in both the UK and overseas at the cost of just £10. The stream includes the score overlay and replays.

You can then get the 22:20 train back from Newport which will have you back in Exeter at 01:39, again having changed at Bristol. The station is less than a mile walk from the ground, just over the river.