Exeter City begin their Leasing.com Trophy campaign when they welcome Cheltenham Town to St James Park in a 7.45pm kick-off on Tuesday evening.

Last season the Grecians made it through to the knockout stages of the competition before exiting at the hands of Peterborough United. City's group campaign saw them impress as they finished top of the group ahead of Bristol Rovers, Yeovil Town and West Ham United under-21s.

Cheltenham Town began their Sky Bet League Two campaign with a 1-0 defeat to Leyton Orient before bouncing back with a 4-1 win over Scunthorpe United on their first home match of the season. They then exited the Carabao Cup following a 3-0 defeat to League One side Bristol Rovers before travelling north to Morecambe to claim a 0-0 draw away from home. Town continued their good start at home when they beat Carlisle United 2-0 before picking up a 2-2 draw with Swindon Town, who have been strong in the early stages of the campaign. They come into this match following a trip to Crawley Town where they were beaten 1-0 following an injury time winner from Ollie Palmer.

On the match, Cheltenham manager Michael Duff said: “It’s nothing new playing Saturday and then Tuesday. It’s an away game so it’s an opportunity to put today (Saturday’s defeat to Crawley) right. We’ll count the bodies on Monday and see who is fit and who isn’t fit and pick a team from there.

The sides last met back in April in Sky Bet League Two in a 1-1 draw at the Jonny-Rocks stadium.

Dean Moxey gave the Grecians the lead with a first half goal before the home side levelled form the penalty spot on the hour mark following a Christy Pym sending off. 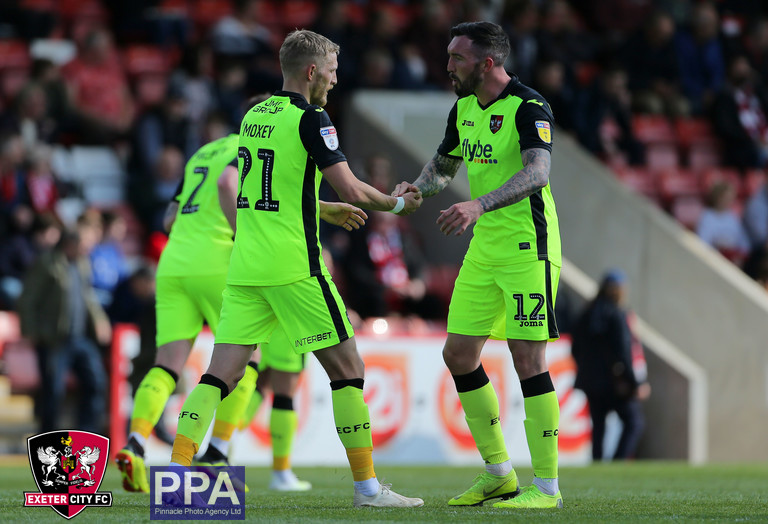 The IP Office and the Thatchers’ Big Bank will only be open for this fixture with turnstiles opening at 6:45pm.

There will be a reduced size of The Grecian for our Leasing.com matches. In a 16-page programme, we cast an eye of over last season’s campaign as well as the current City squad members who have made their debuts in the competition. We also profile all three of our opponents in our group matches.

BBC Radio Devon will not be covering the fixture, but you can stream the game through the club’s Ifollow service. Otherwise we will have live match updates on our Twitter page, and we’ll provide regular updates across Facebook and Instagram. Post-match interviews with manager Matt Taylor and a City player will also be available following the match along with a full report of how the Grecians fared.

The club will be open as normal from 8:30am right through until supporters have dispersed from the stadium following the full-time whistle, giving you the opportunity to make some purchases, including the new away shirt! There is a great range for all City supporters including training wear, mugs, scarves and a selection of pocked money items for kids.