Exeter City have been able to build themselves a positive reputation in recent years for their ability to nurture and give opportunities to young talent.

Recent seasons have seen a number of academy prospects break through and impress when given an opportunity.

Added to that the young players have often been given the opportunity to move higher up the English football pyramid to represent sides in the Championship, and in Ethan Ampadu’s case, the Premier League and now the Bundesliga.

But the opportunities presented to the club’s young players is not a new thing. In theory you could harp back to the days of Cliff Bastin who made his City debut at 16 years of age, before moving on to Arsenal in 1929 to become one of their greatest ever goal scorers.

But another success story to have risen from the youth sides of Exeter City comes in the form of Dean Moxey. A player who has gone full circle in his career which began with the Grecians where he made his debut in October 2003. 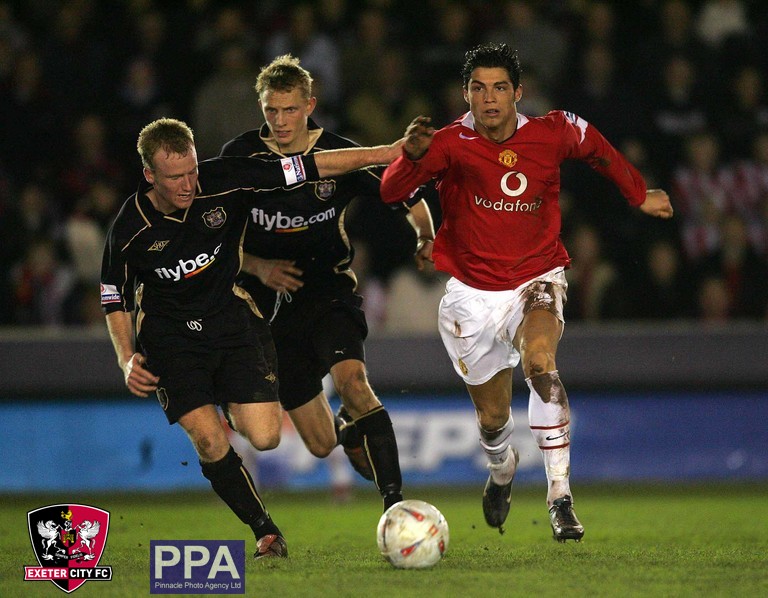 Dean in action as a youngster against Cristiano Ronaldo

Back-to-back promotions with the Grecians saw Dean play an integral role for City as they rose from the Conference up to League One. But his performances on the City left had him destined for the Championship as he joined Derby County in the summer of 2009.

58 appearances followed at Pride Park before a January move to London side Crystal Palace in January 2011. Whilst with the Eagles Dean secured perhaps his greatest football achievement when he won promotion to the Premier League following a play-off final win over Watford.

He would depart for Bolton Wanderers in 2014 where he spent three years before returning home to join the Grecians ahead of the 2017/18 season. Since then, under Paul Tisdale and now Matt Taylor, Dean has been a key man for the Grecians bringing quality and vast experience back to the club where he learned his trade.

On the opportunity that he and other youngsters have received with City, Dean explained: “I think the managers that we’ve had have given youth a chance and it’s something for the young boys to look up to and know that the manager, if you’re good enough, will give you a chance. It’s a great club to be at coming through and knowing that you might get a chance if you do well.”

No doubt the club have the ability to nurture talent on the pitch, but they also develop characters and good people away from it, which is something Dean believes shouldn’t be overlooked.

He continued: “They try and instil things like good manners from the start and the way you have to respect the place and everyone around it, it’s good.

“It’s what Exeter has been about; you’ve got young players coming through, and more this season. It’s really good, it’s what the club desperately needs, we’ve had a lot of high-profile players go and that’s helped the club a lot.”

When asked to consider the setup at the club when he was coming through and up until he left compared with what he has been presented with in recent seasons, Dean says there is a stark contrast which can only help the development of the club and the players that it brings through.

He explained: “The building (the main building at the Cliff Hill training ground) is still here, it’s not the best but when you look at the state of the pitches now compared to when I left here. Any bit of rain would cause mud patches so it’s fantastic, and the 4G pitch down the bottom as well has added on to what the club are trying to do and step forward.”

With the club launching the new STARS initiative to help provide funds for the academy to help ensure they are given the best opportunity to succeed, Dean believes the money raised will be of excellent use.

“My aim from the start the aim was to come through the youth team. With the help of Raddy (Mike Radford, former club secretary and youth coach) who was a big part of this club, who unfortunately left this summer.

“That’s what the club are trying to do, step forward, and we have to take the small steps and I’m sure that with the staff here it will continue to move on.”

Dean has been part of a City team who have started the season well in Sky Bet League Two having amassed 11 points from their first five outings. As part of a back three the Grecians have managed three clean sheets and conceded just three times so far (before the match with Mansfield.) In a slightly different system, the City number 21 feels the side have done well so far. 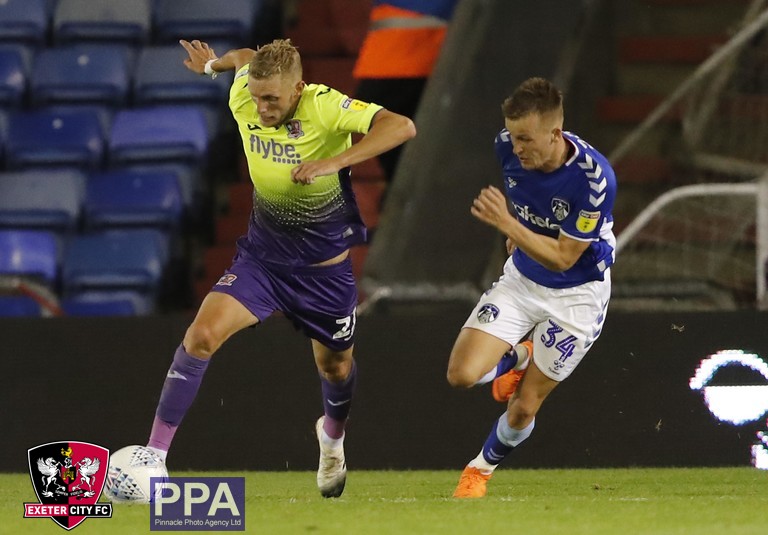 Dean in action for the Grecians against Oldham Athletic

He continued: “I’ve enjoyed it, we’ve had a few clean sheets, so it’s been good. We’ve had a good start which is what we wanted, and fingers crossed we can continue that. It’s good to be in a team with these lads and the new boys that have come in. Hopefully we will get a few more goals, but if we do our job at the back then that gives us a chance.

“There’s a togetherness in the whole group, we’ve got a golf day which will help us, it’s brilliant. The lads are such a great group and it’s enjoyable.

“Tom (Parkes) has started well, and Aaron (Martin) has done really well and worked hard. In defence you know you have to play well or else you won’t be in the team.”

City went into the match with Mansfield having picked up a 3-2 win over Morecambe away from home last time out. Having surrendered a two-goal lead at the Globe Arena, the Grecians then had to battle back and won the game through Nicky Law in the 85th minute.

“The first half we played really well and got two goals up but unfortunately we let one in right on half-time which gave them a real boost,” said Dean. “They then came out and got the second, so it was tough. It was a difficult week with all the travelling and the early hours after Oldham. The recovery was massively important with two away games, we may have got a bit leggy towards the end of the game and they’d scored two goals. We showed great character to go on and actually win the game which is what I felt we deserved.” 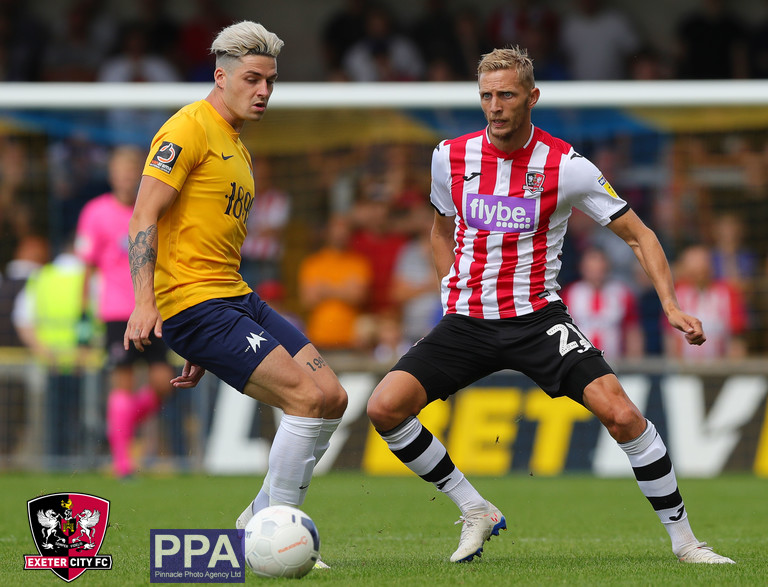 Wins and clean sheets will often result in confidence in any team, having said that with five games played the City team are well aware that there is a long way to go, and Dean feels the performances can continue to improve.

He explained: “I think the confidence that we’ve shown recently. Losing a goal at the end of the Swindon game was disappointing and they perhaps deserved a draw because they played well.

“We wanted maximum points from our first few games, so it was disappointing to let that one in, but the confidence that we’ve got from seeing ourselves top and still not playing our best football, and we’ve got a lot more to play. If we can keep the group as fit as we can and hopefully not pick up as many injuries, then we have a hell of a chance.

“We said it after the game, it’s a good start, but it’s just a start. We can’t get ahead of ourselves and there’s a long way to go. If we do our job at the back then we give our strikers a chance to win the game for us, so it’s exciting.”

Dean has already won praise for his performances this season as City have looked good in defence. But as a player with masses of experience under his belt, he will know only too well that there is a long way to yet.